Electronics manufacturing now relies on silicon wafers, and it works great for many applications. However, some other applications require or benefit from a cheaper price, thinner circuits, and flexibility, and PragmatIC addresses all those three issues with technology to print electronics circuits on plastic sheets.

The technology is said to costs less than 1/10th cost of silicon, with the circuit printed on 10 μm thick flexible plastic “wagers” with support for 10 layers. Circuit starts from basic gates up to ARM Cortex M0/M0+ chip as shown above. Simpler circuits are currently sold for as low as $0.01, but the area for Cortex M0 MCU is 1cm2, and a bit too big for commercial applications, so they plan on shrinking the process to make it commercial viable. ARM is an investor in the company, and PragmatIC is ramping production capacity with the ability to manufacture on billion plastic chips/circuits in 2018. 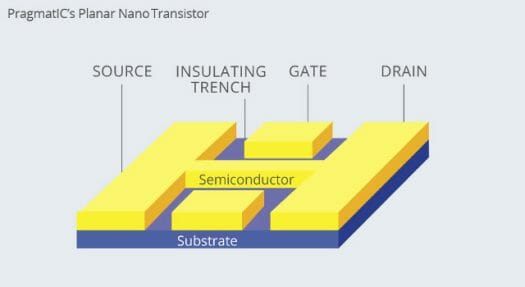 They have 6 types of products/solutions:

The price point, flexibility and thinness of the solution makes it suitable for various applications such as RFID or sensors directly on “smart packaging”, security for smartcard and bank notes, toys and games with curved displays, and once plastic MCU are small and cost effective enough their could be used in wearables, for example in smartwatch to offer thinner devices, or larger batteries, or integrated directly into clothes. I also imagine that eventually combining RFID or GPS with energy harvesting technology, it might be possible to have tracking enabled for all kind of goods or documents, even the cheapest ones.

Charbax interviewed the company at IDTechEx discussing the work with ARM, the technology, and various applications.

Gotta admit that seeing an ARM M* core on plastic is quite fascinating.. almost looks like a hoax.

I wonder how this will be powered and what is the consumption??

I wonder what the equivalent gate dimensions would be in an Si process? Look like 250nm or so given how large those M0 cores and memory are, but the memory is probably a large chunk of it ans we don’t know how much it is.

Still pretty cool. Cooler if one could make them at home.

The era of the disposable phone.

Mind you plastic degrades with time. Would a over clocked CPU melt?