ARM CTO, Mike Muller, showcase imprinted electronics, that is an integrated circuit printed on a plastic film, at ARM TechCon 2015, and several products are featured flexible displays, so in future flexible electronics could bring innovation applications from truly wearables electronics to traceable bank notes, and so on. A company has launched an Indiegogo campaign for a new product, that’s both cool and relatively useless, with ShiftWear sneakers that integrate a flexbile e-Paper display, a battery that recharges by harvesting energy from your steps, and some connectivity (likely Bluetooth LE) to update the display from your iOS, Android or  Windows device. 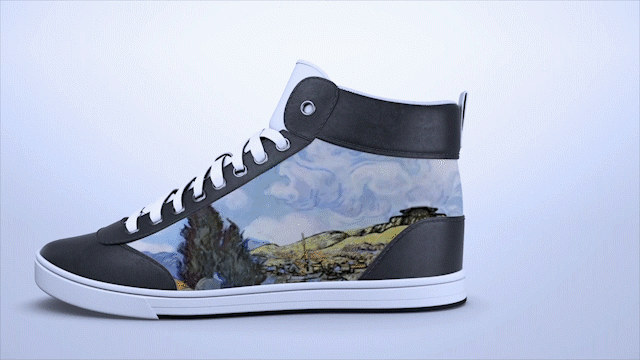 Three models are available: L1, M1 and H1 referring to low height, medium height and high height of the part around the ankle (heel tab?). But all three have basically the same features:

You can display both static images and animation, but battery life will obviously be much better with static images. The shoes are using energy harvesting “walk-to-charge” technology, but it might not be enough to keep the battery charged all the time, so wireless charging is also an option. The Classic version of the shoes are only partially covered with the display. but there’s also a Limited Edition M1 with a display all around the shoe, and limited to 2,000 pieces. There will also be a community to exchange and potentially sell designs to upload to the shoes.

If you watch the video above, you may want to say “just take my money”, but it might be risky because 1. there’s no prototype, 2. launch is only planned for fall 2016, or about one year from now, 3. few technical details are provided, 4. some of the features like HD displays seem tied to a 1 million dollar stretch goal, walk-to-charge to 2 millions, etc.. With that in mind, you could pledge $150, $250, or $350 for respectively L1, M1 and H1 Classic, or splurge $1,000 for a M1 Limited edition. Shipping is not included and adds $25 to North America, and $50 to the rest of the world.