Automation are greatly reduce the number of workers requires to perform manufacturing, and now technology is moving forward with artificial intelligence applications writing financial & sports news, analyzing medical imaging or other data to speed up and improve accuracy of diagnostics, and more. Yesterday, I found out that pair programming, which normally combines two human programmer working together on the same program, may soon pair a human programmer with an AI programmer helping selecting the best code, and today I found out live interpreters may get some competitions with products like Lingmo Translate One2One earpiece that can interpret 8 languages nearly in real-time. 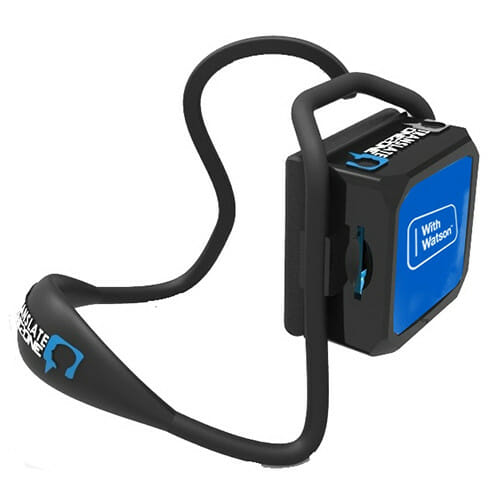 The device was unveiled at the United Nations Artificial Intelligence (AI) for Good Summit in Switzerland, as it combines IBM Watson’s Natural Language and Language Translation APIs, together with Lingmo’s proprietary hardware and machine learning applications. It’s said to be working as an independent device without the need for Bluetooth or WiFi connectivity, which is a little confusing since it surely must rely on IBM Watson servers, unless everything is embedded in the device itself. English, Japanese, French, Italian, Spanish, Brazilian Portuguese, German and Chinese languages are supported, both users must wear an earpiece, translation takes between 3 to 5 seconds to process, so not quite as responsive as a human translator.

Machine translation has been available for a while though services like Google Translate, but depending on the languages you use, the results are not always pretty. We’d have to see how it performs, as so far I have not seen any independent reviews. One way to be might be to run the company’s Lingmo app for Android and iOS that supports 45 languages with voice to voice, voice to text, text to voice, and text to text support. The app is demonstrated in the video below.

Will we see Star Trek universal translator in our life time? Myself I think more of this https://www.youtube.com/watch?v=G6D1YI-41ao