Husarion CORE2 is a board designed to make robotics projects simpler and faster to complete with pre-configured software and online management. Projects can start using LEGOs, before moving to 3D printed or laser-cut version of the mechanical parts without having to spend too much time on the electronics and software part of the project.

Two versions of the board are available: CORE2 combining STM32 MCU with ESP32 WiFI & Bluetooth module, and CORE2-ROS with STM32 instead coupled to a Raspberry Pi 3 or ASUS Tinkerboard running ROS (Robot Operating System). Both solutions share most of the same specifications: 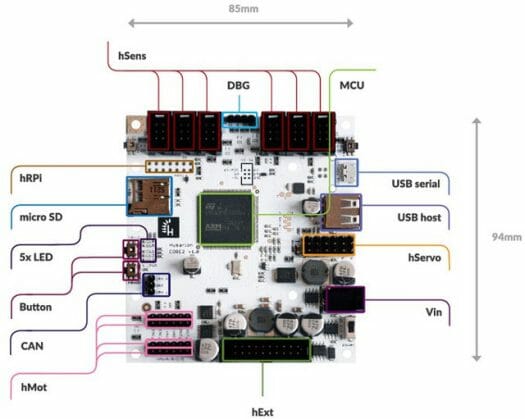 On the software side, Husarion provide a set of open source libraries for robots as part of their hFramework, using DMA channels and interrupts internally to handle communication interfaces. The company has also prepared tutorials dealing with ROS introduction, creating nodes, simple kinematics for mobile robot, visual object recognition, running ROS on multiple machines, and SLAM navigation. CORE2 board can also be programming using the Arduino IDE, and finally Husarion Cloud allows you to securely create a web user interface to control the robot, and even program the robot firmware from a web browser. 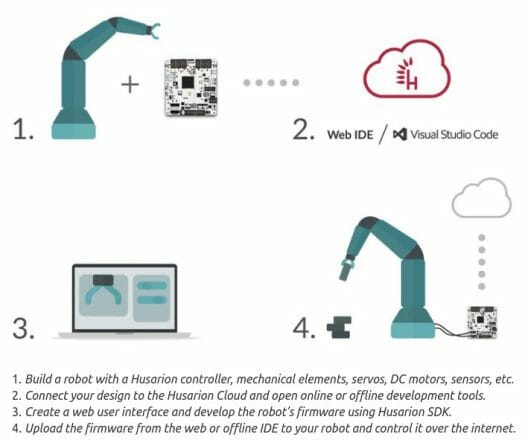 That means you can program your robot using either the Web IDE, or offline with an SDK plus Visual Studio Code and the Husarion extension. The development work flow is summarized above.

CORE2 boards can be used for a variety of projects such as robotic arms, telepresense robots, 3D printers, education robots, drones, exoskeletons, and so on. If you want to learn about robots, but don’t have LEGO Mindstorms and don’t feel comfortable making your own mechanical parts yet, ROSbot might be a good way to start with CORE2-ROS board, LiDAR, a camera, four DC motors with encoders, an orientation sensor (MPU9250), four distance sensors, a Li-Ion battery (3 x 18650 batteries) and a charger, as well as aluminum mechanics. It also happens to be the platform they use for their tutorials.

You’ll find all those items, and some extra add-on boards, on the CrowdSupply campaign, starting at $89 for CORE2 board with ESP32 module, $99 for CORE2-ROS board without SBC, and going up to $1,290 for the complete ROSbot with ASUS Tinker Board. Shipping is free to the US, and $8 to $20 depending on the selected rewards, with delivery scheduled for September 2017, except for ROSbot that’s planned for mid-October 2017.