Just last week, we found out there was a fair amount of TV boxes running Android TV with certification from Google, with most of them from PayTV providers or OEMs. Today, I’ve come to better understand what that means thanks to ARMDevices.net interview of ARRIS at IBC2017. 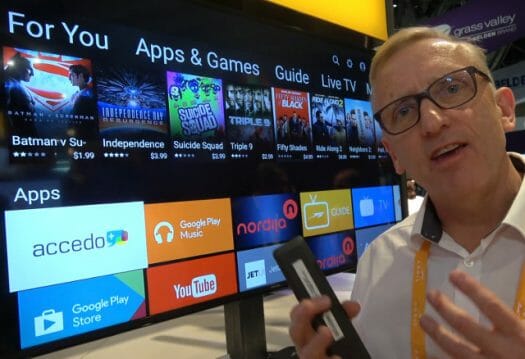 I used to think getting a device with official Android TV support would mean getting Google’s Leanback launcher, but there’s more to it, as Google also offers “operator tier” Android TV certifications, which allow manufacturer to use Android TV operating system with their own launcher/user interface, and official support for Google services like Google Play Store, Google Play Music and so on.

ARRIS International has a whole family of certified Android TV devices with 4K UHD set-top boxes and DVR systems as shown in the table below, all likely based on Broadcom SoCs.

The company then use those platforms to customize the launcher, DVR and DVB functions for their customers, and potentially integrate it with the customers’ IPTV system, and/or DRM solution.

As mentioned in previous posts, more and more OEMs are getting Android TV certification, with Geniatech working on it, since this morning SDMC Tech also contacted me claiming they had obtained Google’s certification for Android TV.

So there must be some SoCs already supporting it, but I could not find any Broadcom SoC with HDMI 2.1 yet.