Phoenix OS is an operating system based on Android 7.1 with desktop optimizations, and is one of the last few options if you plan to run Android on x86 platforms as other projects such as Remix OS have stopped providing images, at least for the consumer market.

The operating system also work on Arm platforms, but it is not open source – except for a Linux kernel release a few months ago -, manufacturers partners with the company to port the OS to their hardware. PiPO P10 2-in-1 laptop is one of those devices, and thanks to Rockchip RK3399 processor should offer decent performance. 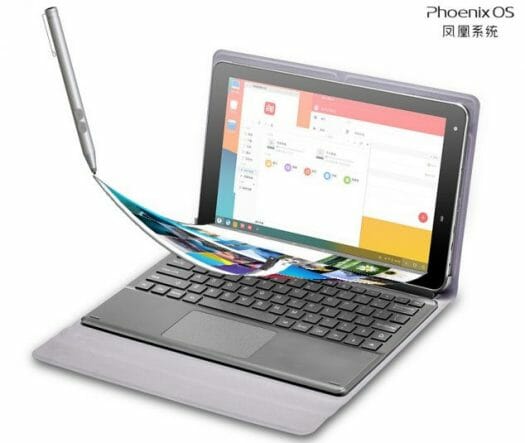 The tablet / laptop ships with a power adapter, a pair of earphones, a USB cable, and an OTG cable. Keyboard, digital pen, and fingerprint scanner are shown to be optional on the manufacturer website. 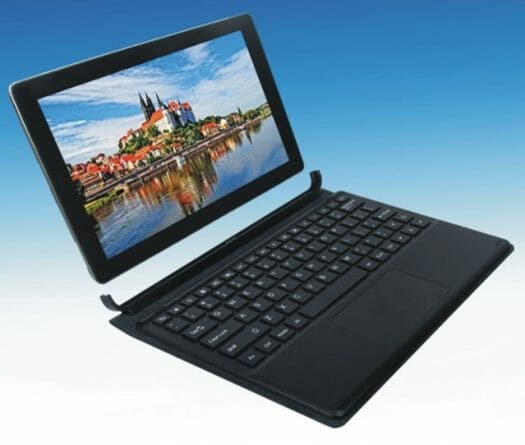 The device can be found on GearBest with keyboard and digital pen for $249.69 including shipping.  The device is also listed as out of stock on the unofficial PiPO store. While talking about GearBest, you may want to change your password, as there has allegedly been a leak of some (162) customers emails, password (plain text), and address.

While talking about Gearbest it should be noted that they horribly failed to deal with this data breach and show a total lack of understanding what happened (storing passwords at all instead of salted hashes is already so dumb and then using an API that allows everyone to retrieve these informations combined with address details… no more to add).

Gearbest victims should immediatey check the email addresses they used when having ordered something there at https://haveibeenpwned.com/

@tkaiser
When I tried to buy something on their website, they asked me to write my credit card details on unsecure webpage (http instead of https). I don’t understand why GearBest is so popular while they don’t respect their users security. There is no customers service because they didn’t even try to answer when I reported this problem.

BTW: My GearBest email address doesn’t show up on https://haveibeenpwned.com/ (I use an own address with an own unique password for every site to track both spam and minimize harm once a breach happens — and such breaches happen everywhere and all the time but I’ve not seen such an irresponsible behaviour like GearBest’s before). But as someone on Reddit pointed out correctly wrt the few customer details on pastebin: ‘The list is proof of concept that the site can be hacked. You should assume you’re affected even if you aren’t on the list’ — he’s right since the shop’s… Read more »

Too funny! After ignoring the problem (API vulnerabilities exposing customer data including passwords and postal addresses) for almost 2 weeks now some ‘information’ from the company:

“We kindly bring your attention to the fact that some unidentified hackers gained large amounts of personal data from other websites and are trying to use this data to deceptively sign into Gearbest. Immediately after identifying this irregularity, we have frozen a few hundred affected accounts and updated our IT system for suspicious IPs. The situation is completely under control.”

@tkaiser
lol. They don’t seem to have noticed their API is the problem.

cnxsoft : They don’t seem to have noticed their API is the problem. Maybe they (or someone else inside the company other than those PR people writing disturbing/damaging statements now) realized that they have a problem. But it’s really somewhat stupid claiming unidentified hackers would use data they found elsewhere to break into GB accounts in a thread that started with ‘I got an unusual hit on Friday, a Pastebin paste with my email address, password and order information for an order I placed with Gearbest amongst hundreds of other customers’ and where already technical details about how the data… Read more »

With the power of internet search these days fragments from one breach can often allow data gathering from other accounts, watching experimental AI, got at it is very sobering. As it builds A4 size data sheets on some people from numerous facts scattered over the net.

Gets even more funny: “Our IT department have investigated this issue and we have identified a few hundred accounts that may have been exposed. Immediately after this knowledge came to our attention we have frozen these accounts and contacted the affected users. Our investigation concludes that it is unlikely that our users information can be leaked from our system. What has likely happened is that ill-intentioned people bought and/or hacked user login information from other websites and were trying to see if those data could access GearBest. As far as we know, those hackers used some special software to facilitate… Read more »

Android isnt open source either. AOSP is, but that isnt full fat Android

I’m curious to know what the “digital pen” is. Is it just a capacitive stylus, or something more like a Wacom pen?

@Paul M
ah, according to the Pipo store “1024 level active capacitive pen”, so it’s not just an artificial finger.

I thought I recognised the spec. The Samsung Chromebook Plus has the same chip.
https://www.samsung.com/us/computing/chromebooks/12-14/xe513c24-k01us-xe513c24-k01us/#specs