RDA Microelectronics processors are found in a few cheap smart and not-so-smart phones, as well as the even cheaper Orange Pi i96 board. But the company does not only design cellular chips, but their portfolio also includes solutions for the Internet of Things and TV & radio tuners.

RDA5981 is a WiFi IoT chip specifically designed for smart home & audio application, such as smart speakers, and it’s found in devices running Baidu DuerOS, the Chinese equivalent of Amazon Alexa or Google Assistant. The company explains it can be widely used in televisions, set-top boxes, smart appliances, wireless monitors, and other products.

The company provides support for FreeRTOS and mbedOS5.1 for the chip. You could get a very basic datasheet from the company’s product page, but if you don’t want to leave your contact details, there’s even more information on Electrodragon Wiki.

The features looks interesting and could become a competitor to Realtek RTL8710AF or even Espressif ESP8266, especially Electrodragon sells their RDA5981X1 WiFi module based on RDA5981A for just $1.92 plus shipping. 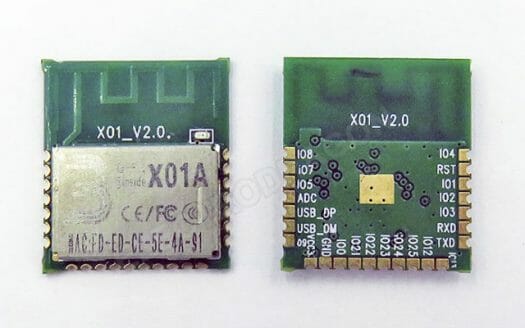 Specifications for the module:

The module also comes with a red breakout board (with 2.54mm pitch) included in the price. The company says RDA5981A IC itself sells for around $1 with price obviously depending on quantity.They also mention the SoC still have bugs without expanding. The board can be programming with AT commands or using mBed as explained in the Wiki linked above.

There’s also an RDA5981 board with Arduino header, which I could only find on Taobao for under $50. Somebody also setup a new Github account with more information, and beside the RDA5981A/B/C models listed in the datasheet,  there seems to be an RDA5981AM chip as well. All RDA5981 variants are shown to be suitable for smart home, but RDA5981C can also be used for smart speakers and WiFi toys, maybe because it comes with 32 Mbit SPI flash? We’ll have to see how things evolve, and whether the solution will gain traction.

Probably should be “KByte”.

This looks more like an ESP32 competetor than an ESP8266. The addition of USB is a huge plus. I’m very curious to see of RDA will keep this locked up for OEMs or if they’ll release enough documentation for hobbiests to get involved. That will be the limiting factor. The price and feature set look great, though.

This module is just wifi module. It does not support Bluetooth 4.0. Please check the wiki again.
RDA5856QE32 is bluetooth i think.

It looks like it’s easier to use than ESP8266/ESP32 in that you don’t need to pull up half of the pins and down another half. At first glance only reset is used to reset the board. It may help it succeed because the whole pin config mess of ESP8266 is discouraging for many hobbyists.

I find the features quite rich overall.

Might be worth a test, specs look good, but hopefully the sdk is cleaner then the RTL8710, wich also promised mbed etc but never released it.

Datasheet and wiki both do not list pins for SWDIO/SWCLK which are necessary to properly debug this chip. Any ideas on where those are?

“…but RDA5981C can also be used for smart speakers and WiFi toys, maybe because it comes with 32 Mbit SPI flash?”

Maybe because the M4 they’re using has DSP. DSP is necessary for dynamic pre-distortion equalization of small speakers and enclosures. The DSP can also do dynamic differential full-duplex and echo-cancellation for two-way audio, like in a home automation speaker/mic. The SPI flash is nice too, it can be used as a FIFO buffer for audio samples as well as holding some adaptive LUT data.

wtf. i couldn’t download the datasheet on your link. and when i found it on Olimex’s links, it’s still a preliminary spec. the website says that it is still a chip with bugs, and that they already sold 200 million of it? what kind of company is this? i hope the module is not filled with sand.