[Update: Next Thing Co. CEO (Dave) contacted me to inform me the company was not closed, but there was just several unfortunate events:

I’ve left the rest of the post unchanged. (except the last sentence)

Next Thing Co. introduced the $9 C.H.I.P computer powered by Allwinner A13/R8 in 2015, and worked with Free Electrons (now Bootlin) to bring mainline Linux to the platform. They also launched PocketCHIP portable Linux game console based on the module, and lateron introduced C.H.I.P Pro WiFi + BLE module based on Allwinner GR8 processor, and found in their Voder (previously Dashbot) car dashboard assistant.

I’m actually still using a C.H.I.P board as a printer server, but this morning I was made aware that Next Thing Co. may have closed shop with their blog and Facebook page gone, as well as the Google Maps page reporting the location is permanently closed. 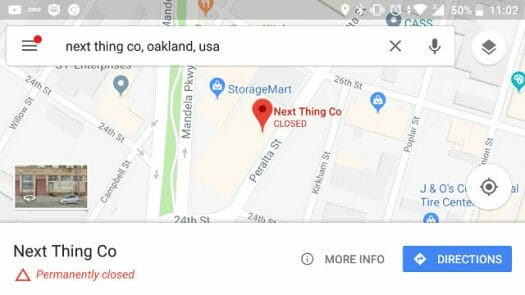 If you have order boards or modules from their website, or pledged to receive a Voder kit from Kickstarter, you may now have no hope of receiving anything. The forums are still up, but just in case, a backup is being prepared and may be posted on NTCfailure.com, whose owner appears to really upset by the KS delay/failure based on the Google Cache of this site. The person handling Next Thing Co twitter handle does not appear to have known about the closure, as he/she posted yesterday.

FYI, while Next Thing Co. indeed works with us (Free Electrons/Bootlin) to bring mainline Linux to the chip, Next Thing Co. never contracted us to support the VPU. The VPU work that is reported in the post at https://www.cnx-software.com/2016/08/30/c-h-i-p-board-and-allwinner-a13r8-socs-to-get-vpu-support-in-linux-mainline/ was done by Free Electrons (now Bootlin), without involvement from Next Thing Co. We did use the PocketCHIP for our demo video because it’s a nice and fun platform, but that’s about all the involvement from NextThing in the VPU effort.

So apparently anybody can edit a business status on Google Maps.
I’ve changed Next Thing Co. from “Permanently Closed” to “Open”, and within a minute I received an email reading:

Success
Your edit to Next Thing Co has been published. See your change. Note that some changes might take up to 24 hours before appearing on Google.
Thank you for improving Google Maps! Your insights make it a better, more useful map for everyone.

Next Thing Co
Your edit
Place is open
Edited on Mar 6, 2018 · Published

@Jean-Luc Aufranc (CNXSoft)
Maybe some frustrated customer made that change.

@Fifi
Quite possible. I initially thought Google would let the verified owner make those changes.

For fun, I checked if I could permanently close Apple Headquarters, and Google Maps did let me go through that process… I did not complete it though 🙂

” For fun, I checked if I could permanently close Apple Headquarters, and Google Maps did let me go through that process… I did not complete it though ”

CNX, in case you don’t know yet, that is the difference of being a con or a real and useful blogger….

would be nice if they contact you again to explain what voder backers will receive for their money.
at least noone (both ntc and kickstarter) seems to care here:
https://www.kickstarter.com/projects/1598272670/dashbot-a-49-robot-for-your-dashboard/comments

Regardless of being “open” or “closed”, are they actually still doing any sort of business? They seem to have stopped accepting any new orders for any of their products since shortly after the introduction of the C.H.I.P. Pro, with all the store’s purchase links replaced with “Contact Sales” buttons any time I’ve looked over past ~6 months. And the community forums seem to be full of people wondering where their 6-month-old orders are, how to get sales to respond back for further orders, and the mods asking everyone to stop talking about it because nobody on the forums, including the… Read more »

If you digg in the forum. You can find information related to RAM supply and NDA agreements locking all the shipments, explanations, and more. Maybe the solution is near the end or maybe never arrive.

This reminds me that they never followed-up on my demand of a refund for the three CHIPs I purchased in early 2017. For the next 6 months, whenever I checked, they claimed they would be shipped real soon now…