Next Thing CHIP board and corresponding PocketCHIP portable Linux computer have been relatively popular due to their inexpensive price for the feature set, as for $9, you’d get an Allwinner R8 ARM Cortex A8 processor, 512MB flash, 4GB NAND flash, WiFi & Bluetooth connectivity, and plenty of I/Os, which made it very attractive for IoT applications compared to other cheap boards such as Raspberry Pi Zero and Orange Pi One. The first board was mostly designed for hobbyists, but  company has now designed a new lower profile system-on-module called CHIP Pro based on Next Thing GR8 SIP combining Allwinner R8 SoC with 256MB DDR3 RAM that can be used for easy integration into your own hardware project. 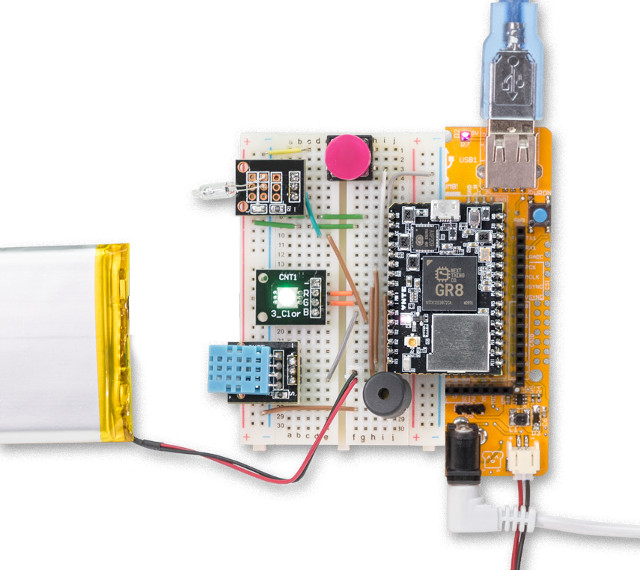 While the original CHIP board exposed full USB ports and interface for video signal, the new CHIP Pro is specifically designed for IoT with the following specs:

The module is pre-loaded with the company’s Linux based GadgetOS operating system, but custom firmware flashing is available for orders of 1,000 modules or more. Potential applications include physical computing, voice recognition, smart consumer devices, portable audio devices and so on. Software support should be identical to what you already get in CHIP board, and you can already find some hardware design files specific to CHIP Pro on Github including datasheets for the system-on-module and Allwinner GR8 SIP. 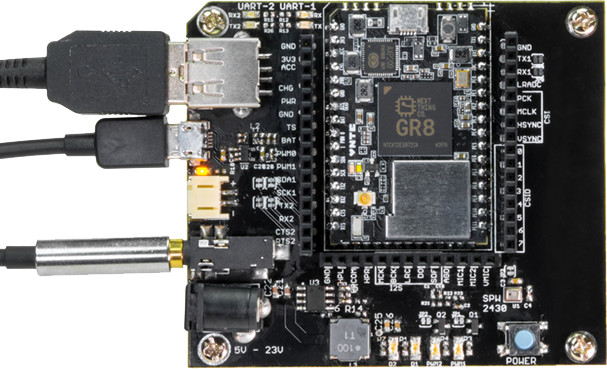 In order to help you getting started as fast as possible, a development kit is also available with a baseboard and two CHIP Pro modules. The baseboard include a 5V-23V power jack, a 3.5mm audio jack, a micro USB port, a USB host port, some LEDs, a power button, and female headers for easy access to all I/Os.

CHIP Pro SoM will start selling for $16 in December of this year without minimum order quantity, and no volume discount, e.g. if you buy 1 million SoMs, you’d have to pay 16 million dollars. One issue with CHIP board is that if you asked Allwinner for a quote for module used in the board, it would cost more or about the same as the board itself. Allwinner/Next Thing GR8 is completely different, as you can actually buy it for $6 (including AXP-209 PMIC) to integrate into your own project. The development kit is available now for $49. More technical details and purchase links can be found on the product page.

Wow, this is a game-changer for makers!

Does R8 boot from SD? Is that PMIC required?

“GR8 is $6 in any quantity and includes the Allwinner AXP209 power management unit. ”

@Deets
Good info. I did not see the official announcement this morning: https://bbs.nextthing.co/t/c-h-i-p-shipping-update-three-new-additions-to-the-c-h-i-p-family/10620

@Jean-Luc Aufranc (CNXSoft)
Just as info: https://www.olimex.com/Products/Components/IC/ (R8 is A13, no idea whether GR8 is now made in a more modern process or still in 55nm)

@noone Could really be a game changer especially since the SIP is accompanied by a PMIC (battery support, measuring stuff without any further hassles/components!). And while Allwinner has other interesting SoCs in their portfolio (eg. the R16 which is quad-core Cortex-A7 but otherwise pretty comparable) it seems they still have not the slightest idea why good software support is essential. If Allwinner’s IoT business unit would try to understand why C.H.I.P. was that successful and why GR8 and C.H.I.P. Pro will be a success from the very beginning maybe they should look at this matrix http://linux-sunxi.org/Mainlining_Effort#Status_Matrix GR8 is just announced… Read more »

Too bad it is not based on H3. Single core feels so vintage.

@Deets
R16/A33 is the better choice than H3 since accompanied by AXP223 PMIC. Since yesterday I have some hope that a GR16 is already in the making…

For this application the Mediatek boards win. Cheaper and you also get Ethernet support. With this one you are carrying around a GPU that is useless. It can’t run OpenCL so it is basically a heating element. Likely Realtek wifi under that shield. This is not an interesting product.

@Jon Smirl
So is there anything interesting from Mediatek that isn’t MIPS and/or with buggy half functional SPI ports?

@tkaiser
If “R8 is A13” isn’t it weird that StatusMatrix gives them different score?

>If Allwinner’s IoT business unit would try to understand why C.H.I.P. was that successful
Wrong. They just need to contract Free Electrons directly.

Bah another A8. Why there isn’t a cheap SIP with A7 core and lpddr3 inside. That’s whats interesting if you want to create something portable.

@Alexey Roslyakov
R8 is not on status matrix since it’s A13. GR8 is slightly different (IIRC it affects Audio pins and maybe some other stuff, don’t remember what mripard told exactly). And of course you’re right, they could contract Free Electrons and also switch to an open development approach. Don’t know whether company culture allows that.

@dvl36 Sure, H3 has both Ethernet and more USB ports, the latter being responsible for high power requirements since people expect being able to juice at least 500mA from each USB port. And of course I was talking about wireless IoT stuff. R16/A33 could also be an advantage regarding power consumption (Cortex-A7 vs. A8 and at least A13 is made in 55nm process and seems to be not that efficient — no idea whether that applies to GR8 too). If we’re talking about wired IoT stuff, H3 is a good choice of course. Or H2+ — yesterday someone spotted that… Read more »

@tkaiser About company culture, there’s an interesting message on arm-netbook mailing lists after LKCL (EOMA68 standard architect) went to Allwinner offices: > They have noticed the persistent bad press/poor reputation and have > understood that what geeks think does actually matter in the long > term, as does upstreaming. well, it’s about to get a hell of a lot worse. i flew 20,000 miles round the world, was invited here to speak with their engineers, help them out, set up a FusionForge for them, make it possible for them to present the R-Series processors to open hardware and software libre… Read more »

@Jean-Luc Aufranc (CNXSoft)
Regarding R16 dev board, googling for ‘parrot r16’ let me believe Free Electrons have that lying around for over half a year (or let’s better say in their lab managed through lavabo).

@Alexey Roslyakov
Feature-wise difference between A13/R8 and GR8 is really added I2S and S/PDIF on the latter. So both SoCs are on par regarding mainlining efforts but GR8 has a few more features that allow more use cases. I’ve also seen that at least 4 LCD pins are multiplexed and can be exposed on CHIP Pro but no idea what can be done with this.

I don’t realy get this, the GR8 is just a soc with integrated ram and flash, why doesn’t allwinner sell it itself?
can’t see a hobbyist solder this, and a boardmaker wouldn’t buy this from another boardmaker.

@jeroen
Maybe, Allwinner was not interested in selling GR8, since it may be used in low volume projects (no commissions/incentive for sales). So instead they sell it to Next Thing in quantities, and let the company handle distribution to smaller partners.

Search on 1688, several companies there are selling R16. They probably have R8 too.

No Allwinner chips are available from normal US/EU distributors. You always have to buy them from Chinese distributor.