Rockchip has posted a tweet about smart speakers, specifically about Midea AI speaker based on Rockchip RK3229, but the second image is what caught my eyes, as it reveals two new Arm Cortex A35 processor designed for “Smart AI solutions”, namely RK3308 and “Gemini” Processor. 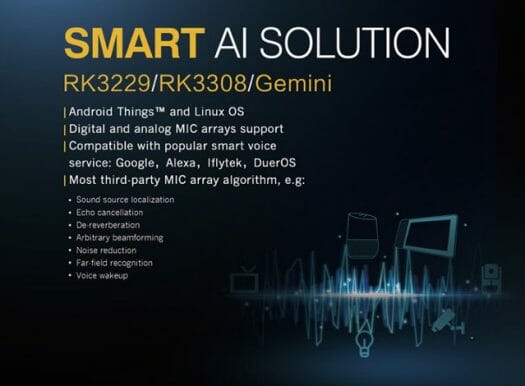 Rockchip will provide support for Android Thing and Linux for the processors, as well as integration with MIC arrays boards and popular voice services such as Amazon Alexa, Google Assistant,  Baidu DuerOS, and others. Arm Cortex A35 64-bit processor was unveiled in 2015 as a replacement for Cortex A7 with slightly lower power consumption, and better performance, but so far we have not seen it in many SoCs, especially standalone, one exception being NXP i.MX 8X.

None of the new processors have a product page for now, so details are limited, but it appears RK3308 looks better suited for “headless” speakers, while Gemini processor may be targeting smart displays instead. It’s also the second time we can read about the mysterious Mali Dvalin GPU, as we first found it in the upcoming Amlogic S905X2 processor.

Nice, looking to hear more on RK3308 and Gemini. I filmed this video about their RK3229/RK3036 Android Things Smart Speakers solutions that they presented recently here: https://www.youtube.com/watch?v=dxmFdmg7Cno

Can’t recall exactly which one but Acer has a tablet out with quad A35 Mediatek MT8167B.

It only supports up to 2 cores and it is deliberately focussed on replacing the Mali 400 (and 450) parts.

It seems to me that Dvalin is an as of yet unannounced code name for Mali G31.

@Redneckerz
EDIT: I just now see that Gemini is a high end part. Perhaps G52 MP2? Usually Rockchip is not aiming for the highest end GPU when they create their ”high end” SoC.