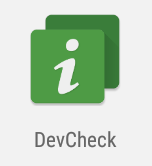 There are already  a few ways to get system information in Android. The most obvious is just going into the Settings menu, another solution more detailed but less convenient is to access the terminal via adb or an app and run some commands, and finally you can also install apps such as CPU-Z.

I’ve been made aware of a new system info app recently called DevCheck, and decided to try it on an Android development board, namely NanoPC-T4 RK3399 SBC. Those apps are often mainly tested on smartphones, so running them on TV boxes or boards do not always yield perfect results. We’ll see.

The dashboard section looks good as the app correctly detects six cores and show difference frequencies for each.

I’ve run CPU-Z to see if it could also detect two clusters, and indeed it does, except it does not explicit reports the two frequency ranges, just the maximum values. 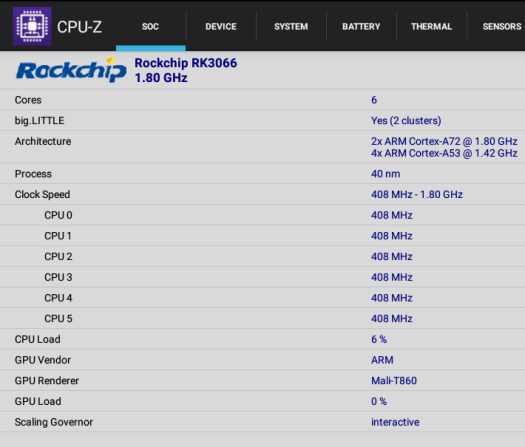 The lower part of the hardware section shows storage, Bluetooth, and other devices.

If you click on the “View” link for Input Devices, you’ll get detailed info about each.

The rest of the information looks quite similar to what you’d get with CPU-Z.

The battery info reports some info, but it’s all dummy for such development board with values hard-coded in the firmware provided by FriendlyELEC. 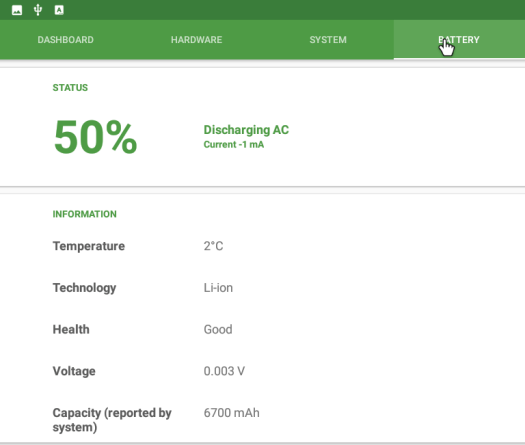 It looks like DevCheck has never heard about Ethernet in Android, as when I was connected over Ethernet it would just show “no connection” over wlan0, and completely ignored the Ethernet connection. Not really surprisingly.

The app sections can show both or other user and/or system apps.

I did not have much in the sensor section, as expected since the board is not fitted with many, except for some thermal sensors for CPU and GPU which seems to report valid values. The battery temperature info is just some dummy value. Somehow the reported value is 260°C here, while it was 2°C in the battery section. 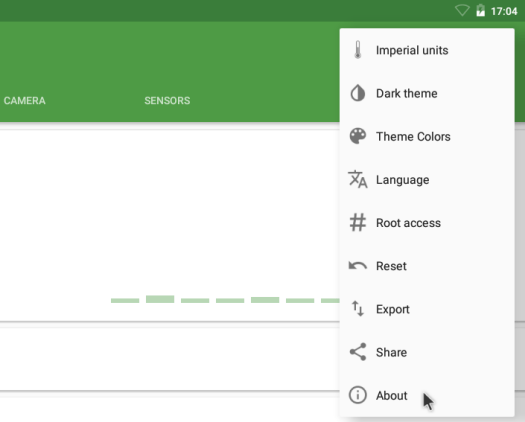 The button on the top right corner brings a menu with some more options. The Dark theme and themes colors are options for the paid version of the app, and so are floating hardware monitors. The Export option is free, and that’s something I could not find in CPU-Z. It will output a text file with a summary as shown below:

I learned about DevCheck app on XDA Developers

Hardkernel used 2.0/1.5 GHz for big.little cores on the N1. No problems whatsoever.

I think the main problem is that board makers simply use the stuff they get from SoC vendor without thinking too much about. That’s why we see all those RK3399 boards being limited to 1.8/1.4 GHz clockspeeds and showing inferior PCIe performance: https://forum.armbian.com/topic/7498-nanopc-t4/?do=findComment&comment=59564

We were told by Rockchip that both RK3399 and OP1 with same process, the different is that the chip can run 2.0GHz filter out as OP1 and the other as RK3399 🙂

I see the CPU is on a 40nm process, isn’t that a bit grude for this day and age. I would have thought that even the most rough n ready hardware would be fabbed at at least 28nm these days. Am I expecting too much?

If you’re read that from CPU-Z that’s wrong. I think the processor is 28 nm HKMG. CPU-Z just reports 40 nm because it thinks it is RK3066 processor. I don’t think there’s a sure way to check the process in Android, so CPU-Z must have a database for this particular info.

Oh in that case it is reassuring, I am not too much out of the loop. Ta.

I looked it up at rock-chip website and it is 28nm, but what surprised me is Rockchip talking about RK3399 for Robot sweepers. Silly me I thought it would be over kill spec wise but seems not.

Nice review. I’m the developer of DevCheck, just saw this so I’ve added ethernet support to the network tab for the next update. Thanks for bringing it up, I never would have thought of it.