FriendlyELEC will send me some review samples from time to time, and normally I just ask for one item, but they aways send a bunch of their products instead. This time I asked for a NanoPi NEO NAS Kit v1.2 to play with, but I got clearly more than what I asked for… 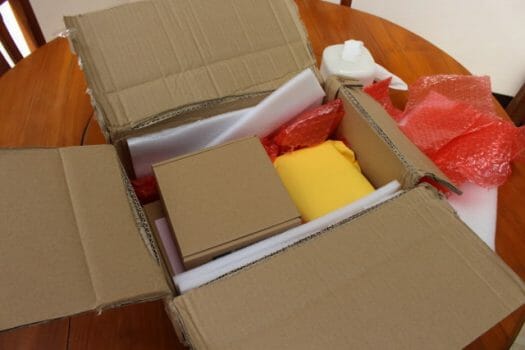 Let’s start with the box at the top.

It contains “NanoPi NEO complete starter kit” selling for $29.99for $29.00 with the following items:

It’s actually not fully complete, as you’d need to provide and solder your own male headers to NanoPi NEO board. I did not have time for soldering that day, but the final results should be really neat based on pictures from their website. 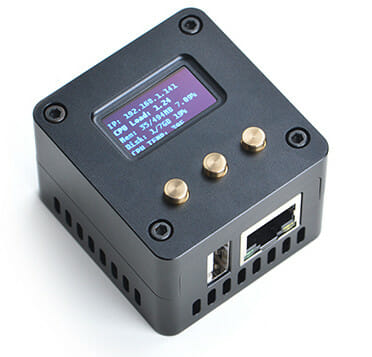 If you prefer the more powerful board, the same kit is sold with NanoPi NEO2 board for $34.00. Both kits are currently out of the stock, but so you may want to add the one you like to your wish list.

That’s two NanoPi NEO NAS kits v1.2, with the marking showing “NEO Station NS-120B”, maybe in reference to “Synology DiskStation”, but they don’t use that name in their website, which is probably a good idea. The models I received as the side plate for NanoPi NEO 2 board, but there may be more inside. I’ll check it later, since I’ll review the kit in details in a separate post.

Unsurprisingly NanoPi K2 board powered by Amlogic S905 processor can be found inside. But we also have a heatsink +fan + thermal kit, a micro USB cable, and an IR remote control. Almost all you need for a TV box, but looking further into the big package, we’ll find an acrylic enclosure completing the kit.

I’ve also taken closer pictures of the K2 board since it’s the first time I’ve received it.

The board has basically the same form factor and ports as the Raspberry Pi 3, but it adds an IR receiver, more memory (2GB), Gigabit Ethernet, and a slot for eMMC modules – which are yet to be available -, but lacks MIPI CSI and DSI connectors. It should be noted however, that while FriendlyELEC mentioned both Linux and Android, they appear to focus their efforts on Android only, with no actual plans to release a Debian / Ubuntu image:

The bad news, according the the Moderator of the FriendlyArm forum, there are no plans for a debian image. Only the supplied Android 5.1 image. ? Meaning its get out the uboot and the compiler and make your own with a bit of USB TTL flashing to boot.

So any Linux images would have to be done & maintained by the community. [Update: finally the company is working on a Ubuntu image too]

NanoPi K2 board goes for $39.99, but the complete multimedia kit should cost more. The problem is that I can’t find it on their website, but if we adds individual item, namely the heatsink + fan ($5.99), RC-100 IR Controller ($2.99), micro USB cable ($1.97), and the acrylic enclosure ($1.99) to total adds up to $52.93 + shipping, which costs a little more than a TV box with similar specifications, but provides more flexibility due to the source code available for NanoPi K2.

I had two more boxes in the package with one more K2 multimedia kit and an extra acrylic enclosure, which would make a nice candidate for a future giveaway week.

normally I just ask for one item, but they aways send a bunch of their products

It’s been the same for me, even when I really want to buy a board I’m going to use for a robot, they insist that I choose a bunch of stuff to add in the pack, and they add even more before shipping. That’s very kind of them, and at the same time they’re totally right to do this because hardware is much less expensive than advertisement and every board given away makes babies by word of mouth, reviews and demos.

all the best with the Nano Pi K2. * The fan on the heatsink was for me, the wrong way round, so I had to remount it, not a major tho. * Android 5.1 is the only official image. * Armbian image for Ubuntu and Debian is available with a slight bit of mucking about with the boot loader. see Armbian S905 and FriendlyArm Forum Its a bit now on the back burner for me, as I haven’t yet got a direct use for it but SPMC 16.5 works fine on the Android image, and plays x265/x264 and some 4k… Read more »

oh just to say the “remote” and usb cable were in the basic pack box. The heatsink was ordered separately. No case tho. But then not one of my pi’s is in a case, so no loss 🙂

As Baylibre work on mainline Linux on Amlogic 64 SoC will that not mean Linux support grows?

Can you please help to do test or review of the Nas Kit please, mine the internal HDD doesn’t seem to work. I got 2 Nas Kit, none of them able to detect the internal HDD. Both of them are version 1.2.

Of course ‘Linux’ already runs on K2 since like everywhere else it matters more how SoC vendor and community support a specific SoC than an individual board maker (FriendlyELEC shines in other areas). That’s why all S905 devices (TV box or ODROID-C2, Khadas Vim or now NanoPi K2) do 4K video output, all run the same boring Android 5.1 with same boring 3.14 kernel. But since Amlogic pays BayLibre fortunately version numbers will increase soon everywhere.

I wish I could get them all to review