As I checked my Twitter timeline in Thunderbird this morning, I started to see a lot of tweets about #VMworld2018 and “ESXi on 64-bit Arm”. What is that? VMWare has just announced and showcased several technology innovations at VMworld 2018, including Virtualization on 64-bit ARM for Edge, and the company demonstrated ESXi on 64-bit ARM running on a windmill farm at the Edge.

It may be useful to readers (and this writer) to look up what ESXi is and does exactly. As explained on VMWare website:

VMware ESXi is a purpose-built bare-metal hypervisor that installs directly onto a physical server. With direct access to and control of underlying resources, ESXi is more efficient than hosted architectures and can effectively partition hardware to increase consolidation ratios and cut costs for our customers.

So basically it’s an hypervisor that stays a close as possible to the hardware to keep performance optimal, and the ARM64 implementation also avoids dynamic recompilation such as  Transitive/OS X Rosetta, POWER VM Lx86 and the associated performance hit .

Some general benefits of ESXi hypervisor as listed by VMWare: 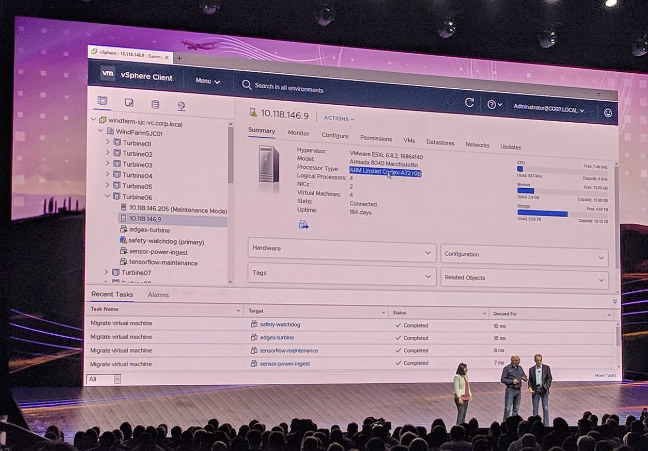 The vSphere client screenshot above shows VMWare ESXi 6.8.2 running on Marvell ARMADA 8040 based MACCHIATOBin board with four Cortex A72 cores, four virtual machines, and 184 day uptime… So the “thing” looks fairly stable too…

Better support for virtualization is a good step in making Arm servers become more useful, and competing with Intel ones. The main downside right now is that it was just a demo, and there’s no work when it will actually become available to end customers with the company simply saying “VMware sees an opportunity to work with selected embedded OEMs to scope and explore opportunities for focused, ARM-enabled offering at the edge.“.

Or “how to bring ARM servers to clueless IT directors”. You know, those who used to say “does it run vmware, no? so don’t buy it even if it’s 100 times cheaper”. It’s a nice recognition of ARM becoming mainstream and appearing in the DC.

Aye. I knew they were working on that for some time, very glad to see it officially announced.

Amazing!, I can’t wait to see it everywhere. Working with a cheap cpu with 64-128 cores is near. I’m also excited to make it working at home with an ultracheap arm soc.

Well, i’ve had some time with Huawei ARM servers to run some Ceph workload on, and the price for the servers (without the disks ofc) were not “cheap” at least here in Norway.