Several manufacturer have launched Qualcomm Snapdragon 845 powered smartphones, including Samsung with Galaxy Note9 and Galaxy S9/S9+ models. Those premium smartphones are normally pretty expensive with pricing starting at $720 to well over $1,000.

Xiaomi Mi MiX 2S released last March  brought down the price somewhat with price starting at 3,299 CNY ($525 ) in China, but the company’s PocoPhone F1 is breaking all premium phone price barriers with the Snapdragon 845 smartphone launched for about $300 in 65 countries. 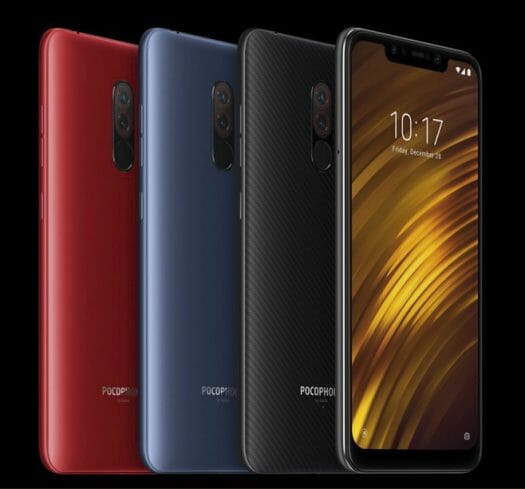 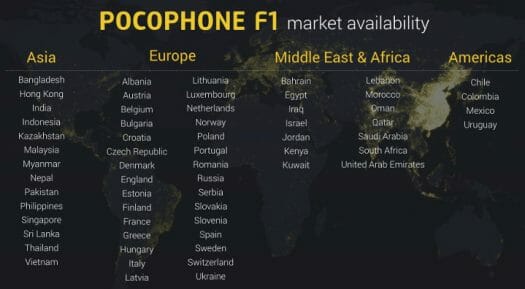 As pointed out by XDA Developers, PocoPhone twitter account has more details including the list of countries where the phone has launched in Asia, Europe, Middle East & Africa, and the Americas. Notable exceptions include the US and Canada.

The exact price of the phone will depend on options, as well as your “beloved” government’s regulations and taxes. Some examples for the starting price (6G/64GB version):

Xiaomi also aims to make the smartphone developer-friendly by promising that unlocking the bootloader will not void the warranty, and a GPL source code release is planned for August 29th. More details maybe found on Xiaomi Poco F1 product page.

So no New Zealand… which is hardly surprising since we’re too small to bother with, but I am a bit surprised that Australia isn’t on there either. I wonder what their criteria are for choosing markets.

Oh available in England but not Wales, Scotland or Ireland. Suspect there will be some smuggling this contraband over the boarders to fulfil demand 😉

On a more practical note, when will they stop increasing the size of phone screens, 6.18″ sounds huge.

Open bootloader…hmm i bet this is gonna boot Linux one day! 🙂

So, when it’ll be available to buy in Thailand?

But still showing as coming soon, so no pre-order possible yet despite the link saying pre-order starts at 19h00 today!.

Can anyone confirm if the phone has an IR blaster? GSMArena’s spec page seems negative, while their own review of the phone contradicts the presence of IR blaster! I’m assuming the reviewer confused it with the IR face unlock, since I don’t see any top front aperture for the blaster.

As promised the Linux kernel source code is up @ https://github.com/MiCode/Xiaomi_Kernel_OpenSource/tree/dipper-o-oss