The laptops did deliver on the last two features, but most reviewers found the devices – such as HP Envy X2 or ASUS Novago TP370 – to be pretty sluggish considering the price you’d paid for them. But Qualcomm did not stand still and announced Snapdragon 850 processor in June, with 30% better system performance, nearly three times faster AI performance, faster LTE connectivity, and a battery life of over 25 hours.

So we just had to wait for products announcements, and the first Snapdragon 850 laptop is Lenovo Yoga C630 WOS (Windows on Snapdragon) that comes with 4 or 8GB RAM, 128 or 256GB internal storage, and hopefully provides a smoother user experience, maybe something similar to Intel Core-m3 processors, but with a longer battery life, and always-on LTE connectivity. 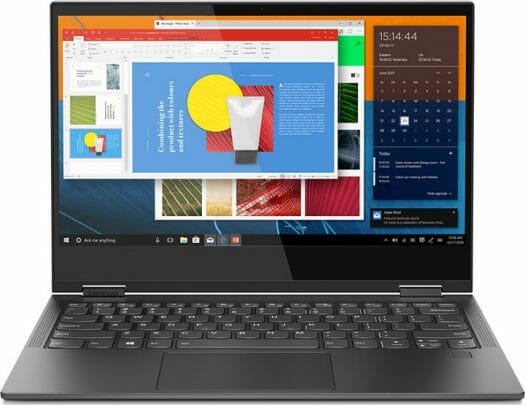 * WiFi and Bluetooth are not mentioned in the laptop specifications at all, but considering the Snapdragon 850 processor comes with built-in support for both, it’s likely they are included.

An optional Lenovo active pen is also offered with the laptop. 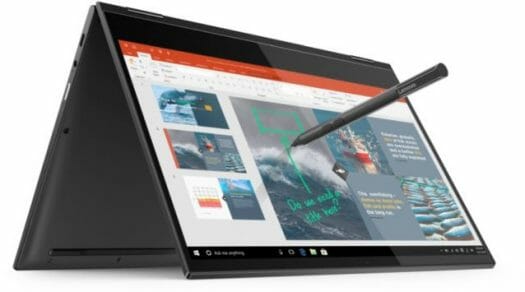 Qualcomm clearly stated the processor would only support Windows 10, and no Android, no Linux in the announcement last June, but apparently Snapdragon 850 is close enough to Snapdragon 845 SoC that work on Linux mainline has already started, and Fedora support – and likely other Linux distros – might eventually become reality.

The laptop was announced at IFA 2018, and the company only provided the price for the EMEA market in the press release: €999 (VAT included) and up starting in November 2018. However, US websites report a price of $849.99, also in November, for the 4GB/128GB configuration.

Care to share details? Seems you refer only to some people playing ‘benchmarking gone wrong’ which is 100% irrelevant for normal work with these devices.

Most reviews stated that anything that was not running natively was slow, as was to be expected if you emulate x86 in ARM. So most browsers were slow and any application that was not Microsoft office or Edge.

> emulate x86 in ARM There is no emulation of x86 on ARM with these devices since this would be way too slow. It’s binary translation with results getting cached. So first time you start a 32-bit x86 app on such an ARM thing it will be pretty slow but subsequent runs will be a lot faster. And the majority of calls will be native anyway since libs and kernel run native. A typical reviewer starts such an app one time just to write ‘awfully slow’ in his review and heads over to the next ‘area of test’. Anyway: not… Read more »

One example of review: https://liliputing.com/2018/08/asus-novago-review-pt-2-windows-10-pro.html Some tidbits: as I type this sentence, sometimes the letters don’t show up on the screen until a few seconds after I type them.…of the half dozen games I only found one that was truly playable.I mean, in terms of raw horsepower, it’s kind of amazing how much this little machine can do with a low-power processor and passive cooling. It’s just the inconsistent performance that drives you slightly batty… that and the struggle to figure out which applications will or will not run on the machine. It’s also possible some of the “performance” issues… Read more »

> as I type this sentence, sometimes the letters don’t show up on the screen until a few seconds after I type them. Yes, this made me really sad. That accessing insane web applications like a WordPress editor adding tons of complexity is considered these days ‘typing some text’ (even by tech journalists). I wonder how many average people other than tech reviewers are forced to ‘type’ in such an awful way but yep, you’re right: this is a reviewer properly reporting things being sluggish on this device regardless of ‘x86 emulation’ or not — most probably he’s experiencing swapping… Read more »

Yes, that’s sad that nowadays that what should be a task generating a fairly basic workload like blogging requires 8GB RAM… He’s also using an image editor (IrfanView) at the same time, and maybe an email client.

> That’s why I recently bought a new laptop with 8GB RAM Yes, the way OS and apps deal with available DRAM is crucial. And since ‘browsing the web’ today means constantly writing to local storage random IO performance of this storage became crucial too. So random IO local storage performance is critical for ‘real world performance experience when accessing the web’ but have you ever seen a reviewer or benchmarker taking care of this and measuring this on a desktop or laptop? Me not. Maybe the UFS storage in this Lenovo thing is faster than internal storage of the… Read more »

Things will be sluggish (as in random stutters and slow startups) until MS:
1) provide more means for devs to go native arm64 (MS’re moving in that dir, just slowly), and
2) don’t just WoW but start re-building their apps for arm

After reading through the Liliputing review Jean-Luc linked to I wonder why you focus on issues related to ‘non native’ code. The reviewer reports native Edge browser bein buggy as hell and overall system performance being sluggish (just like a system being low on memory would behave which is a bit unlikely on a 6GB device): ‘Web pages take a little longer to load than I’d expect. Apps take a little longer to launch. And switching applications is a little on the slow side too.’ Wasn’t there also the problem with the scheduler preferring little over big cores back then?… Read more »

Things like ‘apps taking a little longer to launch’ (or in practice just running slower at start, before JIT translation catching up) can be easily attributed to binary translation, which happens just-in-time, not ahead-of-time. Also, MS are really focused on the WoW for solving most non-nativity issues, and that’s just not the right approach to get optimal performance. A non-WoW (i.e. true native-native) app will always have better latency characteristics. Whether those would be noticeable by the end user when clicking on a page or typing a document is a case-by-case matter. But the ultimate latency benchmark is not really… Read more »

> Things like ‘apps taking a little longer to launch’ (or in practice just running slower at start, before JIT translation catching up) can be easily attributed to binary translation, which happens just-in-time, not ahead-of-time.

Is there JIT or WoW involved? At least video’s resolution is high enough to see in Task Manager he’s running into troubles once Memory utilization is at the max.

I can’t watch the video now (depleted mobile net quota) so I can’t comment on what can be seen in it. But I do hope to be able to see how one of these devices performs for my own self sooner than later.

So I just watched that segment of the video carefully. Aside from the fact the reviewer failed to demonstrate the issues he was talking about, you’re right — the machine was running at full mem utilization, so it’s not clear if the source of the hypothetical issues was not in that. I can’t figure out why the IHV decided to go with a 4GB device in that price range, but that’s just me.

In his review he mentions several time that Edge would be highly instable (crashes and so on). Why should something that runs inside the browser (reviewer ‘typing text’ AKA accessing a monstrous web application called WordPress Editor) not being affected by that?

Apropos, it would be curious to see if 1st gen devices will drop in price now. /sitting on the linux notebook fence

What about Lenovo premium Chromebook announced yesterday, it is a lot cheaper for typing use 🙂

Not sure price of Dells annouced Chromebook.

And it’s actually the price Amazon is pushing them at: https://www.amazon.com/Lenovo-IdeaPad-330-15ARR-Notebook-Ryzen/dp/B07B3C4797

I would have loved to run a linux ARM laptop but this dud is neither linux supported nor remotely worth the money.

Damn disappointing is what it is. 🙁

> Jesus what a rip off

What exactly? The clumsy IdeaPad 330?

The Yoga C630 naturally. $850 for a barely compatible Windows-only laptop at a time when there’s a $650 laptop that outperforms, out-specs and out-features it that we could just install linux on.

Shame is what it is.

Well, I’ve a hard time comparing those two laptops. The IdeaPad weighs almost twice as much, has a horrible display (1366×768 at 15.6″), a laughable battery life and the real flaw is: HDD instead of fast flash storage which is simply insane. And still people want to buy such jokes. User experience on something like this will be terrible.

The $650 option does have an FHD display, though it’s still a pretty dumb configuration. An HDD as only storage, and an optical drive? In 2018? I guess you could rip out the optical drive and get one of those 2.5″ HDD-for-optical-bay things.

I only visited the Amazon link and had the impression for 650 bucks you get laughable 1366×768 pixels. Anyway: I forgot to mention that Wi-Fi is of course also crap on the IdeaPad (single antenna, for good Wi-Fi performance you need 2×2 or better 3×3 MIMO).

Really scare that these devices still sell. So many consumers only focus on irrelevant specs like ‘CPU horsepower’ and forget about user experience and that cheap laptops almost always suffer from shitty thermal design so you can enjoy annoying fan noise most of the times.

While on the subject of IFA’18 and Lenovo, they announced two new MT8173-based chromebooks. That makes that SoC’s 3rd year in a row in Lenovo chromebooks, starting with the N23 Yoga/N11 Flex two years ago, then e300, and now c330/s330. This SoC is just that good for day-to-day use ; ]