Windows on ARM has been tried before with Windows RT, but the systems were crippled, and it was not exactly a success. Microsoft and Qualcomm are now giving it another try with ARM mobile computers running the full version Windows 10 on Qualcomm Snapdragon 835 processor, and Asus, HP, and Lenovo building devices based on the solution. 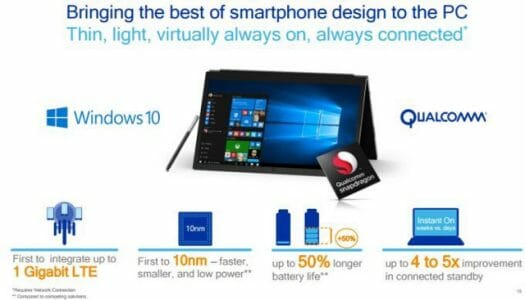 There are plenty of inexpensive Intel PCs running Windows 10, so what would be the benefits of using Snapdragon 835 SoC? Qualcomm explains that it’s the first to coming integrate Gigabit LTE, it offers up to 50% longer battery life in specific use cases like watching videos and gaming, and thanks to big.LITTLE technology provides up to 4 to 5 times improvement in battery life compared to Intel’s solutions.

Windows 10 does not have the same limitations as Windows RT had, and you can do pretty everything that you would on an Intel PC, including installing and running 32-bit x86 application thanks to an emulation layer that convert x86 instructions to ARM ones.

Mobile Geeks filmed a demo in Qualcomm booth, showing Office (Word, Excel, Powerpoint), Outlook, installing a 32-bit x86 application, multi-tab web browsing over an LTE connection, and playing some YouTube video, including a 4K video. As a side note, the demo guy told the “legal department told him to only show Qualcomm content”, probably because of inane copyrights laws. That’s really ridiculous that those laws apply to showing a 10s clip for an hardware demo. But I digress, and it was stressed again that it was the first time big.LITTLE was supported in Windows 10, and allowed for much better efficiency.

Nice! Now, about those OEM machines (where we’ll be running linux ; )

At 0:50 the presenter says Excel is run through the emulator … What?! If Microsoft wants Windows-on-ARM to be a success, it should provide Microsoft software natively on ARM, so Windows + Office + Edge + IE + VisualStudio.
If even Microsoft finds that too much trouble, how can they expect others to compile for Windows-on-ARM to achieve full speed?

@Sander
Good point. Maybe they started with the development of the Emulator. Make the Emulator as fast as possible and now they start with the native converting.

@All Is someone at the Computex and can ask this question?

@Sander
He’s talking about an ’emulation layer’ but I would assume in reality that’s no emulation but something comparable to Transitive’s QuickTransit (maybe Microsoft simply licensed the technology und integrated it into Win10 for ARM).

@tkaiser
It’s definitely some form of binary translation – anything else would be too slow.

@blu Of course, and an emulation would not only be too slow but somewhat stupid. To me this looks like an intelligent approach: Provide the ABIs to natively deal with all the stuff that has to happen on specific SoC engines (that’s 2D, 3D and video acceleration as well as dealing with LTE networking) to get full speed and energy efficiency while dealing with the stuff that has to run on CPU cores both natively as well as using a binary translation so x86 compatibility is never a concern (as long as we’re talking about 32-bit binaries). x86 compatibility is… Read more »

@tkaiser
Sure, that tech does work, people will benefit from it. Me personally, I’m just glad it will have better adoption than Canonical’s product – I was getting worried I was running out of ARM 2-in-1/netbook suppliers ; )

blu : Sure, that tech does work, people will benefit from it. BTW: I’ve been recently reminded how much ’emulation’ layers you can stack on top of each other while it still works a treat. One customer has a Windows box providing a virtualization environment (either VirtualBox or VMWare Player — forgot the details) for OS X 10.4. The x86 version contains both Rosetta (see Transitive above) to execute PowerPC binaries as well as the so called ‘Classic Environment’ to emulate a whole pre OS X MacOS environment. In this environment (it’s not really an emulation) there runs an old… Read more »

@tkaiser
10.4 x86 never had Classic. I wonder if they are using SheepShaver?

@parrotgeek1
Oops, you’re right. So they must have changed something when they virtualized the setup one or two years ago (the PowerMac G4 they kept for this purpose before all died in the meantime).