Hicat launched HICAT.Livera machine vision board for robotics projects on Kickstarter two year ago. The company second project is still related to robotics and machine vision, but geared towards a different target audience, as ARCO robot aims to offer an augmented reality gaming experience to kids, although it’s still hackable/customizable as we’ll see below. 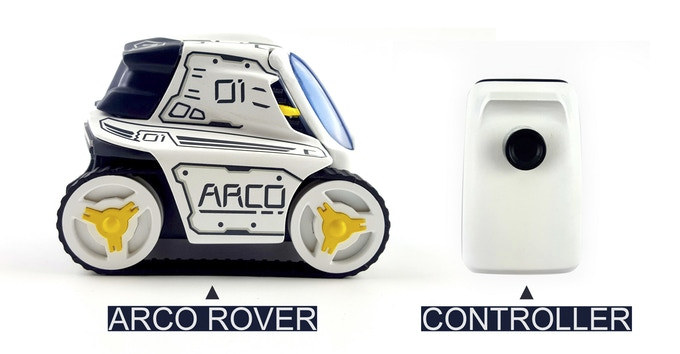 The hardware part is mostly comprised of ARCO ROVER robot, and a Bluetooth controller that can be stored in ARCO’s inner capsule, where it recharges and communicates with ARCO through a magnetic pogo connection joint.  The listed specifications are rather limited:

There’s also an optional headset for your phone. The software part is what make the product stand apart. While you could use the robot 100% in the real world, the developers also designed AR games for mobile phones where the robot becomes part of virtual worlds, and you can use the controller to play against virtual targets.

The company has developed several apps so far including:

ARCO’s AR system works with object recognition allowing your smart phone to track the location and position of ARCO,  and plane detection technology to place a 3D virtual environment directly onto any surface area.

There’s no information in the Kickstarter page about open source, or customization ability, so I asked, and Raymond Zhang, Hicat Co-Founder Hicat explained there were three hackable parts:

A early bird pledge of $79 or more should get you an ARCO kit with the robot, ARCO Android or iOS app, a USB type-C cable, and AR glasses. Shipping adds $20 the cost, and you’d have to be fairly patient however as delivery is planned for April 2019.

It looks pretty impressive. But I wonder if the AR game can run on my iphone6.