Terminology used by engineers may be confusing for end-users, so for example in the TV market 720p becomes “HD Ready”, 1080p “Full HD”, and 4K may be referred to “Ultra HD”. A few years ago, I tried to buy a 1080p TV, and the seller was really confused at first saying they only had “HD Ready” or “Full HD” televisions. Two terms I had personally never heard of myself, but eventually we managed to understand each other…

Up to now the official IEEE name for different WiFi standards like 802.11n, 802.11ac, or the new 802.11ax may have been a little confusing to consumers. So the WiFi alliance has decided to launch a new scheme naming scheme. 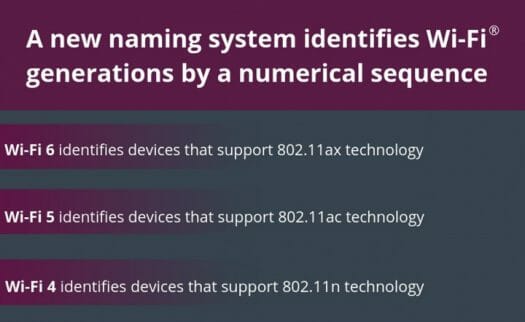 We’ll soon have to refer to 802.11n routers as WiFi 4 routers, AC routers as WiFi 5 routers, and it will probably be less confusing for 802.11ax routers since I expect them to be sold as WiFi 6 routers once they become more broadly available.

The new naming convention may have impact the WiFi signal strength icon shown in your computer, mobile device, or other WiFi enable devices with a display,  as a number may be added to indicate a WiFi 6, 5 or 4 connection has been established. This is optional, but I suspect many companies will implement this since it’s not such a big change to the code.

You’ll find more details including guidelines for the naming convention and visuals in WiFi Alliance website.

These questions are the same with the old bad naming…

Good idea !
So much bad naming !
Usb C instead of usb 4, xbox one instead of xbox 3, geforce RTC instead of geforce 11 and the top : intel Intel NUC DC53427HYE instead of nuc3i5

USB 3.1 and 3.2 is the one with stupid naming scheme, where half of them is basically a rebrand from older versions.

> USB C is a connector type (like USB A/B, mini A/B and micro A/B) that support USB 2.0, 3.0, 3.1 and 3.2 Nope, USB-C is a standard developed roughly at the same time as USB 3.1. It supports various USB speed modes (the slow modes on the Hi-Speed/USB2 data lines, SuperSpeed or SuperSpeed+ on the respective SSTX/SSRX differential pairs), an Audio Adapter Accessory Mode for analog audio and optional Alternate Modes for a bunch of different protocols (DisplayPort, Thunderbolt, HDMI, …). USB-C compliant cables AFAIK need to be compliant to USB 3.1 specs even if they only provide Hi-Speed… Read more »

> The conclusion is that USB C is a shitty name I don’t think so. Prior to USB-C we had a bunch of different [Mini]|Micro] A and B connectors and respective [Mini]|Micro] A/B cables . USB-C solves a lot of problems with the old connector and cable types. IMO the only real problem is USB-C gear not specifications compliant (those USB-C cables that can set your laptop on fire) And a totally different problem is that ‘the market’ used wrong names from the beginning to describe ‘speed classes’. It’s not USB2 but Hi-Speed, it’s not USB3 but SuperSpeed and it’s… Read more »

I think what schmurtz refers to is that when you get a device with USB type-C port, the manufacturers often don’t mention the speed, nor the supported alternate modes. Is the USB-C port only for power, or also data and/or video/audio? So that’s confusing in that sense, even though If I remember correctly we talked about visuals (logos) that should describe those features. but few products make use of those.

To be fair, the problem was that the USB 2.0 spec included all those extra connectors you mentioned. It also included USB-on-the-go.
So you could correctly say that it was a USB 2.0 physical/electrical interface (especially if the port is OTG), even if the PHY/transceiver don’t support High-Speed. Crazy, but technically correct.
Splitting out the connector and power specification into USB-C is definitely an improvement on that scheme. Any confusion is mostly the IF’s fault anyway.

Anyway. In my opinion USB-C is not a good example for bad naming since It simply deals with connector/cables and tries to improve on the A/B mess we had before (with a plethora of different A and B connectors, ‘illegal’ A/A cables existing in the wild since simply needed, USB cables with power wires so tiny that everything above 500mA resulted in a massive voltage drop and so on). If an USB spec tries to overcome the USB A/B connector/cable mess how should it not be called USB-C? It’s a different problem that end users don’t understand USB protocol/spec revisions… Read more »

Just wrote a quick review of some of those affected boards not available yet (NanoPi NEO4): https://github.com/ThomasKaiser/Knowledge/blob/master/Quick%20Review%20of%20NanoPi%20NEO4/README.md

Nope, KopiJahe is correct. USB-C is a connector system.

I feel there must be an xkcd commic about this…