Diskio Pi was a DIY tablet kit for Raspberry Pi, ODROID-C2/XU4 and other compatible boards with a 13.3″ Full HD display that launched last year on Kickstarter. But the project failed likely due to the high costs (350 Euros and up for early bird pledges without battery nor SBC) and an elevated funding target of 400,000 Euros.

But the team did not give up, worked on reducing costs, improved the design, and recently relaunched Diskio Pi on Kickstarter with a more achievable 52,096 Euros target, and reasonable pricing with rewards starting at 189 Euros including VAT. 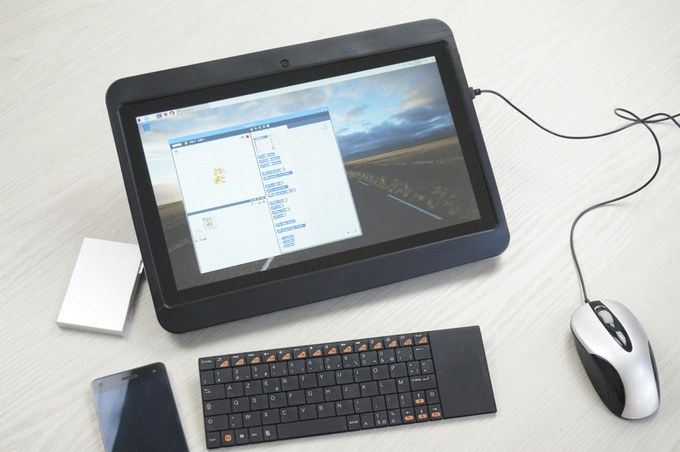 External ports includes 2x USB 2.0 host ports up to 500 mA, a 9V DC jack, HDMI, Ethernet, and USB power out (2.5A). There are also some status LEDs and OSD/power buttons on the unit, and support for Raspberry Pi camera (not included).

Beside supporting various Raspberry Pi and ODROID board, Intel Atom X5 based UP Board has also been tested with the kit. Everything is sent as a kit, and assembly takes around 2 hours.

As mentioned in the introduction, rewards start at 189 Euros inc. VAT for Diskio Pi Basic without batteries.  If instead, you’d rather get the basic kit plus the 4-cell battery pack, a pledge of 216 Euros is required. Shipping adds 8 Euros to France, 16 Euros to most of Europe, and 36 Euros to the rest of the world. For the latter, you are not supposed to be charged VAT, so I’m not exactly sure how they plan to handle that part. Delivery is scheduled for August 2019, so you’d need to be patient…

According to the kickstarter page the thing is 35mm ‘thin’ and implements no means of effective heat dissipation. Not sure whether I would call this a tablet then…

This thing looks pointless at so many levels…

Adding my voice…. Yes, this and various thick and ugly RasPi laptops are all outclassed by Chromebooks, which are nothing to be excited about. Putting one of my XU4s into something like this might be useful, but, really, trying to use a desktop OS via a touchscreen–well, you might as well not pay for the touchscreen feature. I’m not interested in Android. It’s not self-hosting. It’s a consumer product.

Has anyone tried fitting a rockpro64 into a Pinebook ?
https://www.pine64.org/?page_id=3707
(ignore the heatsink height for a moment)

Better wait for the Rockbook 😉