Everyday I read hundreds of articles trying to find something interesting to write on CNX Software blog, and one way I keep track of news is to subscribe to RSS feeds using Thunderbird. From time to time, feeds get broken due to updates making them fail RSS validation, and today I noticed Samsung ARTIK feed had stopped working, so I went to the website, and… 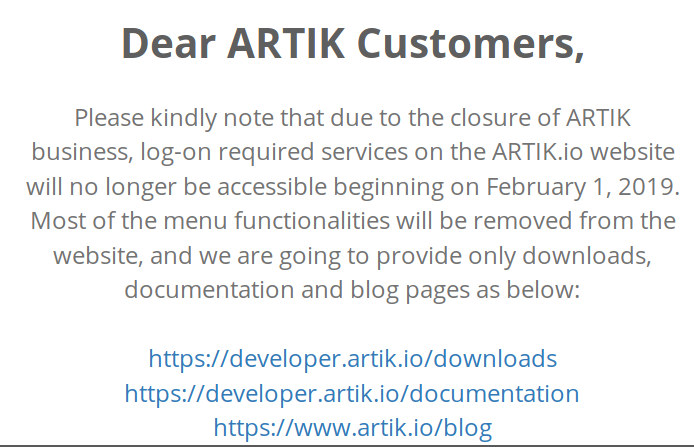 Wait… What closure of ARTIK business? It turns out Samsung Electronics decided to shutdown their ARTIK product line in December 2018 as reported by Business Korea:

Samsung Electronics will pull the plug on its ARTIK project in four years after starting to develop the internet of things (IoT) platform.

IT industry experts say that Samsung decided to halt the ARTIK project because of its poor results. Samsung wanted to build an IoT ecosystem and lead the IoT market through the ARTIK project but it did not yield any tangible results.

Some critics said that the ARTIK project was not suitable for large companies such as Samsung.

Samsung is at least the second company with a failed entry into the “IoT market” after Intel discontinued its Galileo, Edison and Joule boards, followed by Curie module, and more recently Quark processors.

Samsung Electronics actually issued a notification of discontinuance of ARTIK product line on December 3, 2018, where the company explains that despite being committed to the IoT market, they’ve decided the ARTIK product would no longer continue.

I should not be surprised about this news as I seldom heard about ARTIK based projects, but I still am since I just received balenaFin developer kit that includes an ARTIK-020 module beside a Raspberry Pi CM3+ Lite module. I suppose that’s just a low-volume development board, so Balena probably stocked enough modules, and maybe there’s an alternative available.

… the artik020 used on the balenaFin is a white-label rebrand of the Silicon Labs bgm111, which is not being discontinued. Future boards will come with a Silicon Labs branded module but they’re the entirely the same thing underneath.

>Samsung is at least the second company with a failed entry into the “IoT market”
>after Intel discontinued its Galileo, Edison and Joule boards, followed by Curie module,
>and more recently Quark processors.

Pretty sure Marvell fired all of their “IoT” people a while ago too.
I think it’s basically a Cypress (ex-Broadcom stuff) and maybe Espressif game now.

These ARTIK things were way too expansive to be used in anything except prototypes
or first runs paid for with VC money so it was never going to be a sustainable business.

…plus Realtek, RDA, Mediatek, Qualcomm, TI, and some others

Crappy sdks. Not really a choice for anything built outside of the far east.

They don’t seem to have a complete IoT platform. Couldn’t find anything.

>TI, and some others

I forgot about TI. Their stuff was a total mess a few years ago. Maybe it’s better now.

I even started to design my own board but the cost for that is too high.

If you guys have some idea,this is the requirements:
I2S or multiple microphone input and amplified audio out.
SPI and i2C. A bunch of gpio.
Mainline kernel support.
Small Footprint (max 50mmx35mm)
Low power consumption and low heat.
And the most important ARM64 due to a proprietary Google library.

For now the only solution I’ve found is the NeutisN5 but the fact that they delayed for more or less a year don’t make me happy. Also the Allwinner H5 generate heat even at really low clock. And that board don’t have a PMIC for Vcore.

I think that stuff is slightly different. Technically almost anything Cortex A can run Android Things. It’s still too expensive to integrate into something like an IoT coffee pot. 🙂

>And the most important ARM64 due to a proprietary Google library.

That might be a problem. All the cheap stuff is still 32 bit.
If you don’t mind writing your own device tree and/or wasting a few days trying to get it to boot there are a few different allwinner “coreboards” on taobao in solder down, 2.54mm pin header, SODIMM etc styles.

Why would a IOT coffee pot need a 64 bit CPU? I guess just to add voice!

Unfortunately is too big.
I have never ordered from taobao. too much chinese for me.

Writing some driver and a DTS is not a problem for me.

Use superbuy.com to do the order for you. It’s basically the same deal as ordering stuff from banggood or aliexpress except you’re going right to the source so the range of random stuff available is much broader.

You are not going to find much small than that 44mm square board for a reasonable price. Note that you have to have four chips on the board – SOC, DRAM, flash, PMIC. To get a significantly smaller SOM you have to use an SOC with POP packaging that places the DRAM and flash on top of the SOC. Those exist, but they aren’t cheap and they aren’t easily available.

With that tight of a space constraint you likely need to design your own hardware.

>POP packaging that places the DRAM and flash on top of the SOC.
>Those exist, but they aren’t cheap and they aren’t easily available.

There a quite a few with 32bit ARM cores. Unless there’s a sudden reason to put arm64 cores into ip cameras I don’t think any 64bit ones will show up.

the 64bit ones are in phones.

Maybe V3s could fit the bill, but it’s just a cortex A7

>Maybe V3s could fit the bill, but it’s just a cortex A7

If you can use a 32bit ARM then there are a few options. V3s is also EOL but there are tons of them on the market. There’s also the S3 and now S3l. There are IP camera SoCs from a few other vendors that have integrated memory too.

Hi, Are you sure that V3s is EOL? I was thinking in a project with it.

>Hi, Are you sure that V3s is EOL? I was thinking in a project with it.

Yes. V3s has been replaced with the S3l. It’s essentially the same chip in a BGA.
Unless you’re thinking of making thousands and thousands of units you should be safe with the V3s though. There are plenty of them around.

Android Things is useless unless you are one of the chosen few. Android Things is not an open platform. If you try using it without Google’s blessing your will sooner or later discover that you need an encryption key from Google and they aren’t going to give you one. Same thing applies to Android Auto. So if you don’t work for a billion dollar corporation, forget about selling anything based on those platforms.

Sure you can use the Qualcomm modules. But they are so expensive you are never going to make any money.

It is far more effective to base your product on generic Linux which does not require permission from gatekeepers to use it.

Plus as far as I understand Android Things is only for smart speakers now, no more custom IoT projects.

> Also the Allwinner H5 generate heat even at really low clock. And that board don’t have a PMIC for Vcore

And the SoC is EoL in the meantime too.

>And the SoC is EoL in the meantime too.

Probably doesn’t matter for DIY stuff. Guys in Shenzhen can get you full trays of stuff that hasn’t been made in a decade. 😉

QCOM have an Xtensa lineup? Interesting what might be the pricing span.

That’s interesting. Looks like they have some sort of homekit support too.
Do you have access to the SDK? If so is it any good? Is it a hack job of some RTOS and LWIP?

Depending on the part, you don’t need an “SDK”. Seriously. OE does the work for you in the large.

Well, not surprised at all. As mentioned, the pricing was way off and the hardware was confusing imho.
There was no coherence as a product range and it seems like Samsung decided to a typical “let’s see what sticks” approach, but clearly nothing stuck, so they pulled out.
Oh well, no big loss, except for the distributors, as they seem to be stuck with plenty of stock that no-one is going to want.

They are also dumping artik cloud which was not necessarily tied to the hw. Is smartthings next? The artik 0 series modules were actually not priced too badly but not very good documentation.

Balena told me the artik020 they use is “a white-label rebrand of the Silicon Labs bgm111, which is not being discontinued”.

I was mostly thinking of 05x series

https://artik.cloud/ is discontinued too.
This was a good “free” IOT end to end solution.
Any good alternative?

Pricing was way too high. They also botched the launch. They wanted to grab CES headlines so they announced there. Then they didn’t have product available until a year later. All of the initial interest was gone by the time parts were available.

Here’s a clue. Make your chips easily accessible via distributors in Asia/US/EU. Make your software easily available on open git servers. Pay smaller companies to make dev boards for you. Use your clout to help market those dev boards.

Stop trying to make these higher priced SOMs. The economics always collapses with any kind of volume. You’re a chip company, focus on selling chips.

In the same way, I noticed that OpenPicus, home of all the Flyport module, closed his activity on IoT with little or no warning at end of 2018. Website got wiped and it’s now hard to get information or even the compiler / IDE to support old product (you should use the Internet Archive).

Samsung still do their T series chips, which are aimed at IoT.

ARTIK was an interesting platform and I am sad to read these news. Indeed as @Jon Smirl
has already written, the pricing was way too high. From the point of view of consumer products, the only thing worse for an embedded platform than short end of life is unexpected preliminary end of life.