Samsung Artik IoT boards will finally start selling on February 22 via Digikey. With the many fascinating developments in the IoT space over the year, you’d be forgiven if you completely forgot about Samsung Artik boards. So let’s have a quick recap. 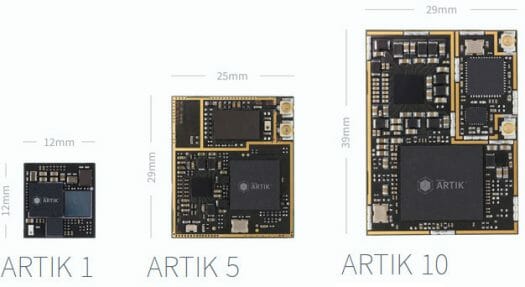 You can find the SDK, documentation, and community forum on  Artik developer’s page.

Artik 1 and Artik 10 prices are not unavailable, 4 days from the launch… however Artik 5 kit is already sold for $99.99, and includes a baseboard, Artik 5 modules, three antennas for WiFi, Bluetooth and Zigbee, as well as a power supply and a USB cable.

Why waste time with this until we know the price of the modules? If Artik 5 module is over $10, it is not interesting. Plus the RF is a mish-mash. Three antenna connectors? They should talk to Espressif.

Artik 5 board also has zwave and sigfox/sub-ghz?

@Jon Smirl Well. it’s not hard to understand why they went with Silicon Labs for ZigBee, at least not if they want to support the HA profile, as they have by far the best development tools. On the other hand, the chips are about 4x what the ought to be. And then there’s that issue of the Silcion Labs programmer that’s ~$500… @Deets It’s not very likely the module does, but it does indeed look like the developer board does (Sigma Designs chip clearly visible) which helps explain the $100 price point, as Z-Wave alone would add $5 in components… Read more »

@TLS I think Zigbee is a dead end and I won’t work with it anymore. If 802.15.4 is going to have any future it is with 6lowpan (ie Thread). But.. I think BLE is going to win. BLE is dirt cheap and it can do everything 802.15.4 can. It can even mesh if you really want it to. Personally I think meshing lowpans is the wrong way to go. Better to build the backbone out of wifi and then use the lowpan for the leaf nodes. ESP32 is perfect chip for making that architecture. My favorite leaf node is the… Read more »

It is funny that ARTIK means waste in Turkish.

@Jon Smirl Thread is not 6LowPAN and the problem of both “standards” is that they’re not very standardised. Two 6LowPAN devices won’t talk to each other if they’re from different manufacturers, as the software end can be quite different. Thread is so far something of a joke, there were a handful of devices on display at CES, but nothing that really seemed to be working and so far it seems like unlike Z-Wave (and much in the same was as ZigBee) you only certify the radio stack, not that the devices are compatible and will work with sensors/devices/controllers/gateways from other… Read more »

@TLS A core flaw in the design of all HA is to expose the lowpan at higher levels. You say you want IP everywhere, but you really don’t. IP to a temp sensor that connects for a millisecond when it decides it wants to is just pointless. So my first rule — if it has mains power it has to talk wifi. ESP8266 enables this at very low cost. Now you can use heavy, but simple, protocols like JSON. You can even stick an ESP8266 into a light bulb, it is rated up to 120C. Second rule — if it… Read more »

@Jon Smirl Makes sense, but you’re missing one thing here, interoperability between brands. There are as I said above, no standard device “announcements” when a device connects to a network that lets the rest of the devices know the capabilities of a new device. Z-Wave offers a fairly rudimentary way and it’s far from perfect, but it’s the only “standard” I know of that offers this and which is compatible across all brands/manufacturers. This to me is a huge issue. Today the acceptable way to solve this is to go out of the home/office/whatever via a cloud using some kind… Read more »

@TLS Interoperability between brands should be done at the wifi level where they can use things like http and json. You could even use UPNP at this level. Trying to make the lowpans interoperate is a giant mess that is best avoided. UPNP actually has profiles for light switches and thermostats. But it is an old protocol, JSON is a better solution. We don’t have the model I described in the market yet because until recently it has been cost prohibitive to include wifi in things like light switches or bulbs. But that equation totally changed when the ESP8266 appeared.… Read more »