Before I start this post I’d like to confirm April’s fools day has passed in all time zones, and is now gone for a year. With that out of the way, I’d just come across some strange gadget called SERVO K07 that looks like a pen, but is a 6-in-1 thingy working as a normal pen, a 2G phone via a NanoSIM card, audio recording device, a radio and music player, a camera, a flashlight. I understand you can also sync with your smartphone over Bluetooth to synchronize contacts and make calls through your actual phone if you don’t add your own SIM card. 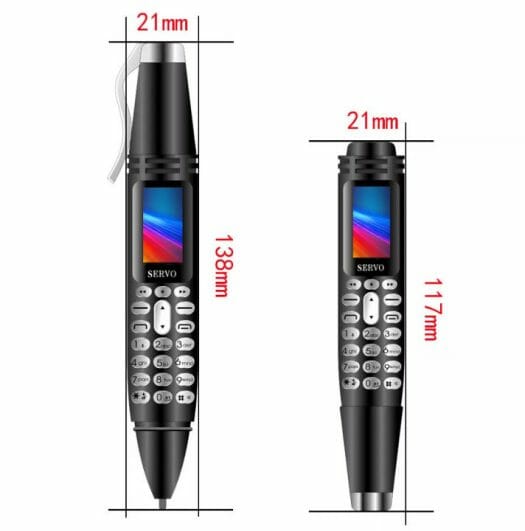 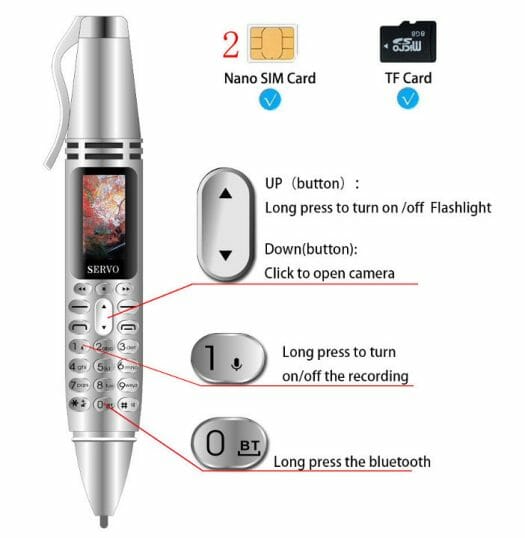 Apps include a calendar, an alarm, a calculator, an E-book reader (good luck!), and a music player. Supported languages are English, Russian, French, Italian, Arabic, German, Spanish, Portuguese, Vietnamese, Turkish, Hebrew, and Polish. The first time I saw the pen I saw it could digitize your handwriting over Bluetooth, but that’s definitely not the case.

The phone/pen/audio player/audio recording/camera/flashlight comes with  4 spare ballpoint pen, a  USB cable and charger, and a user’s manual. I found this “beauty” on Banggood where it is sold for $26.99. It’s the first time I come across a “pen phone”, so I did a quicky web search, and it turns out another company is selling something a little similar minus the cellular part with Zanco Smart-Pen going for $59 on Indiegogo.

GSM only, so it’s instant electronic waste in most countries…

There are still 5 other functions 😉

One American phone sim provider told me they have a GSM LTE sim allowing 2G device use.

You must order one!

Only missing a sonic screwdriver mod

Didn’t this come a day too late? This clearly isn’t real. Who the hell needs a pen these days? I thought phones replaced pens, not the other way around…

How do i acess the rradio