We’ve reported about the first Amlogic S922X TV box – Beelink GT1-K – last week, and unsurprisingly more are coming starting with Ugoos AM6. The former appears to the passively cooled, but Ugoos AM6 will include a fan for cooling providing optimal performance for the new Amlogic processor.

While we do not have photos of the enclosure so far, Ugoos share with us some pictures of the board and the specifications.

Other significant differences against Beelink GT1-K are that Ugoos AM6 should cost less since the default option has less memory (2GB) and storage (16GB). WiFi performance should be really good thanks to AP6398S module with MIMO and RSDB (Real Simultaneous Dual Band ) support.

Like other Amlogic S922X boxes, Ugoos AM6 will run Android 9.0. The company did not provide any pricing nor launch date, but for reference, ODROID-N2 development board will start shipping tomorrow in limited quantities and sells for $63 with 2GB RAM (and no storage), while Beelink GT1-K is expected to launch by mid-April at a yet to be disclosed price. So I assume we will not need to wait that much longer.

New Ugoos AM6 photos with mass production heatsink and enclosure. 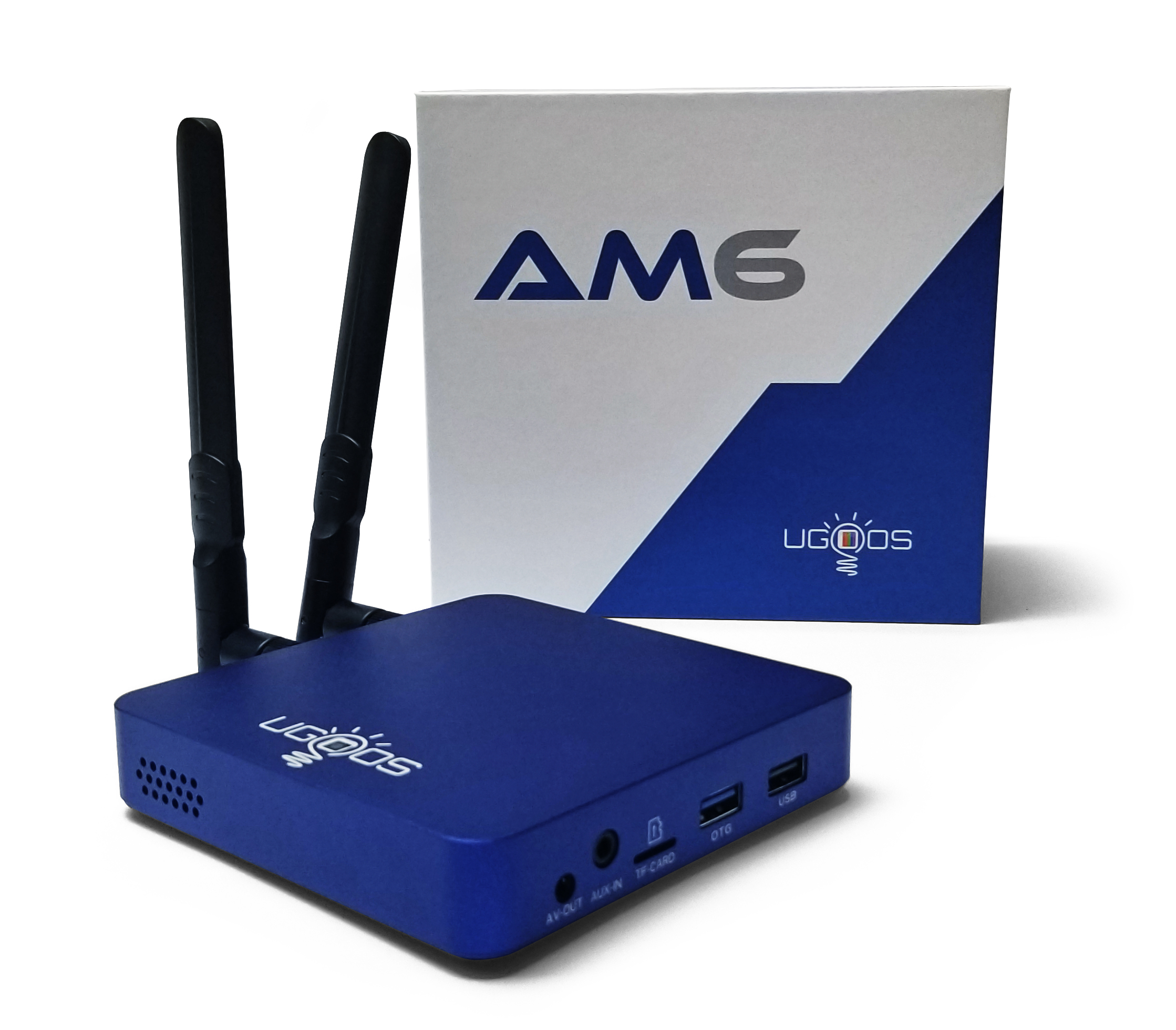 Hope that’s just a test board, the fan and heatsink do not look best design to maximize cooling. It could be improved.
You want maximum surface area for heat radiation combined with maximum heat removal for the TV box. Swirling air in a confined box is no help.

Looks like a blower fan that blows air sideways into the heatsink. I guess they did that design to reduce the Z-height.

The fan looks like an afterthought, no benefit of using anodized heatsink when actively cooled…

I said the same thing, it is not good, if the presence of a fan is planned.
The Dreambox One will be equipped with an aluminum heat sink, at the front end of the case : https://www.satking.de/dreambox-one-vorab-test

Well, everybody (except RPi Trading Ltd. employees) knows that a heatsink inside a tiny enclosure is a really stupid idea since only heating up the enclosure from inside over time. Doing it correctly (see ODROID-N2) and dissipating the heat out of the enclosure by making the enclosure the heatsink might increase BOM costs compared to a crappy fan that will die shortly after warranty expired. Also consumers are not engineers and interpret an efficient cooling strategy (warm enclosure transporting heat to the outside) as the exact opposite: device overheating.

Everything fan attached is really irritating me. Only fanless option is what I accept. Goodbye…

same for me. Once you add a fan it becomes a PC, it’s not an SBC anymore.

I feel the same way. I use this in the living room and I don’t want a fan. I will pay more but fan is a no go for me.

good radiator design unlike some other board

I doubt this heatsink is going to be used in the final product, if you look closely, on the first photo the radiator is not even mounted on the board. The standoffs have spacers made of PCB material, and there is no third hole on the board to attach the heatsink securely.

If anything like the photo of another product by Ugoos on their OEM page. It is a arrangement they used before. 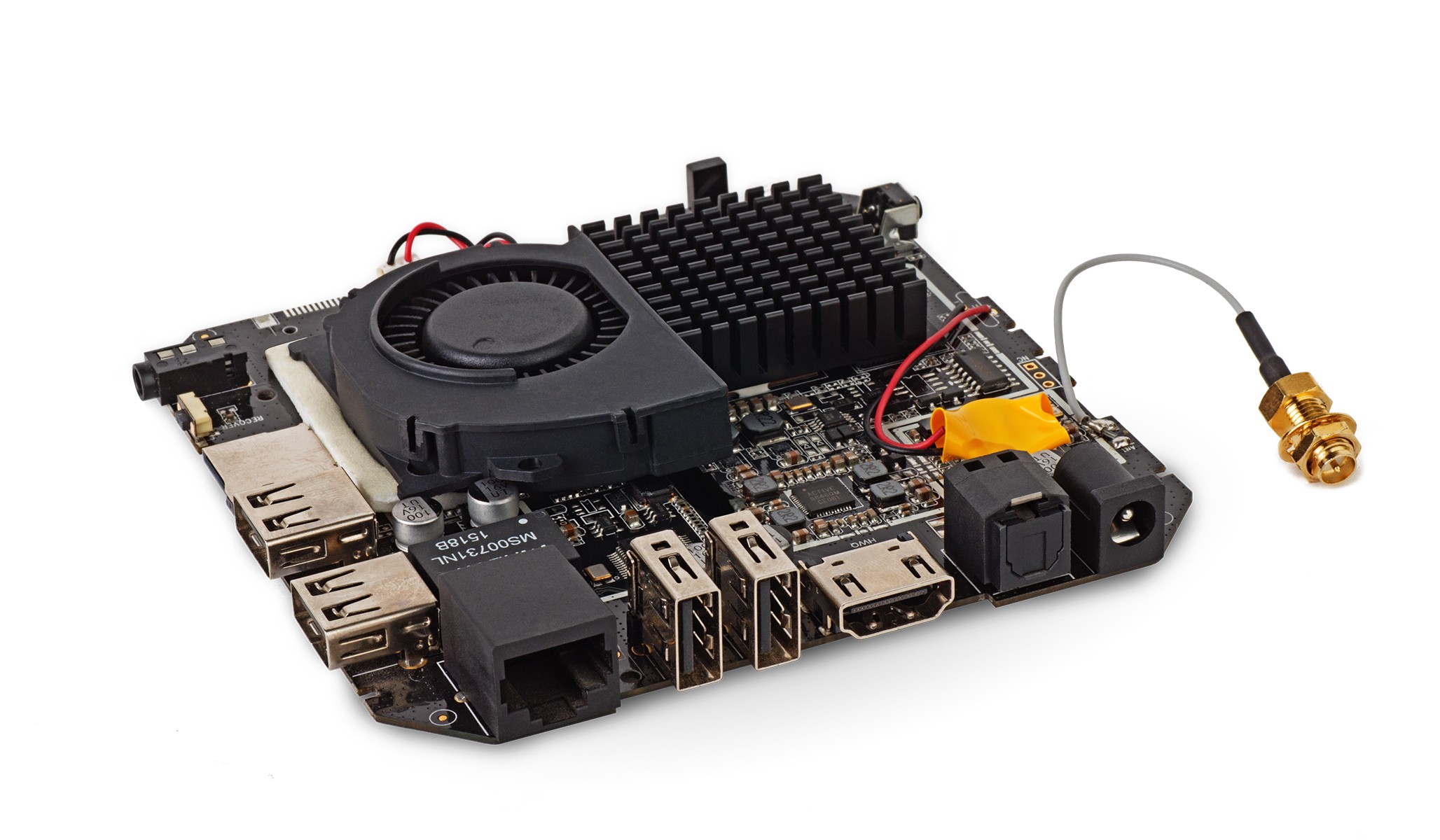 Thanks. Just changed the link to add the image right into the comment.

So they have experience with this configuration, and must have customers who require a fan for their application.

> So they have experience with this configuration, and must have customers who require a fan for their application.

In my personal experience (parents, friends) I had to realize that consumers in general don’t like devices with good heat dissipation. Once an enclosure gets warm they’re concerned. If a plastic cover remains cool and a fan blows the air out on a side or the back everything is fine…

GT-King has HDCP KEY and Leve 1

But Netflix HD is not working, so the L1 DRM has no benefit at all.
Google also doesn’t license L1 DRM to non AndroidTV devices anymore since last year, so it can be blocked in future by them.
There is also a microphone inside the GT-King that turns on if the voice remote is disconnected, instead of just the voice remote that can cause problems with customs in a lot of countries since it’s against the law and can be used for spying. Better to remove it in unshipped devices.

So has a mic, just like a phone, tablet, Amazon Alexa, a digital video or photo camera, a intercom, a baby alarm, a laptop and many more voice activated device. Their all spying on us ! Amazon, Roku, Now TV 😉