We’ve previously written about MakerAsia when covering their KBX Extension case for Kidbright ESP32 educational board. The company has now launched a new product, but it’s not an hardware platform, and instead KB-IDE is an open IDE (Integrated Development Environment) ESP32 boards.

The IDE is suitable whatever your level from kids getting started with supports visual programming, to Arduino programming, and even the official Espressif ESP-IDF framework for more experienced makers.

The IDE comes with with a Board Manager, a Plugins System and works with any Arduino Library out of the box.

Made with Vue.js framework, KB-IDE is open source with the code available on Github.  You can install a binary release, or build it from source for Windows, Linux, or Mac OS. Since it’s open source, it’s also expandable so makers can customize it, for instance by adding new architectures (AVR and ARM are already planned), new boards,  creating plugins and/or adding libraries.

I’ve found KD-IDE to be quite nicer looking than Arduino IDE with for example the board manager showing actual photos of the boards beside the name. Some other notable improvements and features include 30-60% faster compilation, as serial console with raw text mode, customizable graph and controllable sending process, examples with tutorials and so on. 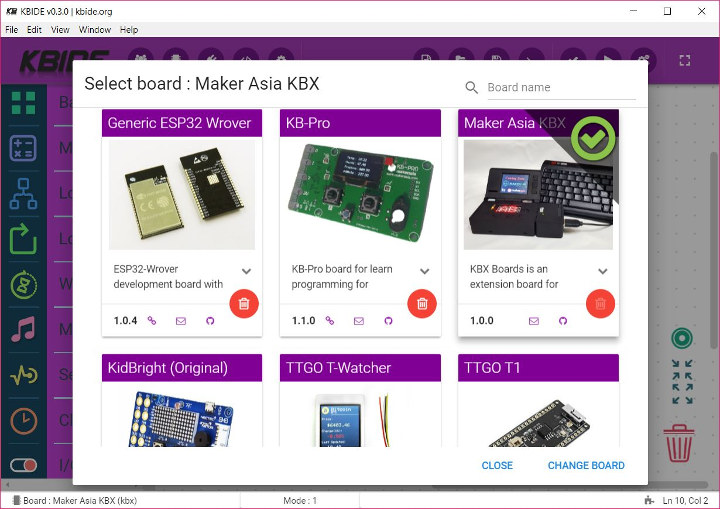 Building it from source fails:

Using the binary gives me an empty window with no functionality.
Thanks, but no thanks.
I’ll check it out when they reach 1.0, for now I’ll just stick with Arduino IDE>

Binary running, can you show me the error log by open View->Toggle Developer Tools ?
Mostly install and compile from source we didn’t password protect any parts of our repo. After Googled, someone say this error may solved by using “npm cache clear –force” or install directly “npm install -g @vue/cli”
Thanks.

The “git clone” should use a https:// url instead of the ssh one. I have never used this, so I don’t know where the ssh url is introduced, but a relatively simple fix.