BBC Micro:Bit board was first announced in July 2015. Designed for STEM education, the board was then offered to UK schools in March 2016, and a few months later UK store would start selling it worldwide. It’s now available pretty much anywhere, and you can likely find it in a local store or online.

The Thai government must have seen this, and thought to themselves “If the British can do it, we can do it too!”, as the National Electronics and Computer Technology Center (NECTEC) part of Thailand’s Ministry of Science and Technology designed KidBright32 board and courses to teach STEM to Thai students.

The board is based on Espressif Systems ESP32-WROOM-32 WiFI and Bluetooth module, and comes with large holes for power (5V/GND) and 6 digital inputs/outputs,  smaller through holes for I2C and more I/Os, as well as an I2C header. We’ll also find some LEDs, two dot matrix LED displays, three buttons, a buzzer, an RTC, a light sensor, and a temperature sensor. The board is powered via a micro USB port, which should also be used for programming, and a USB host port. You can check out the schematics (PDF) for more details. 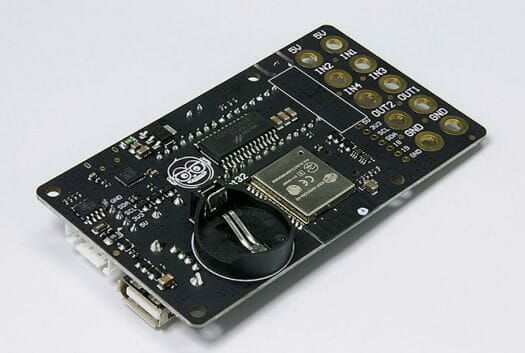 Just having a board is not sufficient for teaching STEAM, so various courses / tutorials / lessons have been made available on KidBright website (in Thai language), and  KidBright32 board is programmed using visual programming in KidBright IDE, heavily inspired from Scratch, and working in Windows, Linux, and Mac OS. You’ll find KidBright github account with more resources, although some are closed source including KidBright IDE. If you somehow got hold of the board, and you find visual programming is not for you after all, KidBrght32 is also supported in Arduino core for ESP32.

For those of us who don’t know, how does that $18 price translate into real-world affordability for normal Thai families? Will working class kids be able to afford it?

Minimum salary is 300 Baht per day (around $9). For reference, I know some people who work for the government, senior position (but not top boss) that make around $1,200 + benefits like free health care for whole family and pension.

I’ve just checked the average salary is around 14,000 Baht in Thailand, so around $420 per month.

So over two days wages (when you factor in a psu) for an educational micro which you still need to have a working computer to use. I hope the Thai government is going to do a massive giveaway, or at least make sure that every school has a few.

Anyway, thanks for putting that price into context for us!

KidBright project, free for student . The Thai government supports the project for both teachers and students at no cost.

First start give out to school at 200,000 board, and Increased amount for all student later in next budget

Tell me please. Is it viable ?

I can see the project is still being developed as I saw news about KidBright v1.6 a couple of weeks ago.

They are making a portable case with display, joystick for KidBright board: “MakerAsia KBX”.
https://www.facebook.com/kidbrightSTEM/posts/1283360398465494