2017 is coming to an end, and as I do every year, I’ll take a look back at the year that was on CNX Software. The pace of development boards launches has not slowed down this year, and we get an even wider range from the low-end with Orange Pi or NanoPi boards, to much more powerful ARM boards, and some new entrants like Libre Computer. The same is true for TV boxes, most of which now support 4K HDR, ranging from ultra cheap models selling for less than $20 to higher end Android TV boxes, while mini PCs were dominated by Intel Apollo Lake models, although some Cherry Trail products were also launched.

Processor-wise, Amlogic launched more Amlogic S905X derivatives with S905W/S905D/S905Z, which are popular in the TV box market. Rockchip’s most interesting processor this year was RK3328 quad core Cortex A53 processor designed for 4K HDR Android TV boxes, but also popular with single board computers thanks to Gigabit Ethernet and USB 3.0 interfaces that provide good I/O performance. Allwinner H2+/H3/H5 were launched last year, but they kept being used in cheap development boards, retro game consoles, etc.. The company also launched A63 SoC for 2K tablets, and H6 for 4K OTT TV boxes, and we can expect the latter not only to be found in TV boxes such as Zidoo H6 Pro, but in more Orange Pi H6 boards, and likely other products in 2018 since beside media capabilities, the processor also supports Gigabit Ethernet, USB 3.0, and PCIe. Intel’s Celeron and Pentium Apollo Lake processors dominated the entry-level Windows mini PCs market this year, and Linux was much better supported than in Bay Trail / Cherry Trail processors, but few manufacturers decided to offer Apollo Lake mini PC pre-installed with Ubuntu or other Linux distributions.

2017 was also an interesting year for the Internet of Things (IoT) with Espressif ESP32 going into full gear, and prices dropping to $5 for maker boards. Other WiFi IoT solutions that looked promising last year such as RTL8710AF, did not really took off in a big way. LPWAN (Low Power Wide Area Network) solutions got even more traction with LoRa dominating, but far from being alone with Sigfox, and the emergence of 3GPP standards like NB-IoT and eMTC.

While I had written articles about 3D printing in the past, it really became a proper category on the blog this year, thanks to Karl’s reviews, and 3D printers provided by GearBest. I’d also like to thank Ian Morrison (Linuxium), TLS, Blu, Nanik who helped with reviews and/or articles this year.

I’ve again compiled a list of the most popular posts of 2017 using the pageviews from Google Analytics, but for a change, I’ll show the results in reverse order: 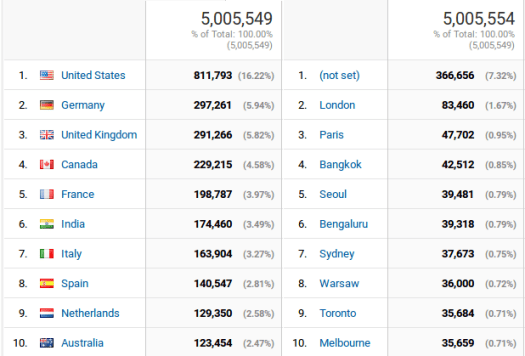 The top five countries have not changes, but this year Germany overtook the United Kingdom in second position. Traffic from India increased on a relative basis, and Australia made it to the top ten at the cost of Russia. London and Paris kept the two top steps, but Bangkok rose to third position, while last year third, Tel aviv-Yafo went away completely from the list. New York is gone being replaced by Warsaw in 8th position. 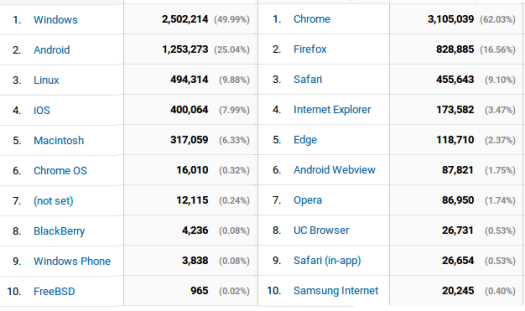 The list of the most used operating systems, and browsers is fairly stable, but the trends noticed in past years continues, with Windows share of traffic going down, Android going up, and Linux stable, while Chrome dominated even more, with most other browsers going down in percentage basis, except Edge that is very slowly replacing Internet Explorer, and Samsung Internet that replaced Opera mini in the list.

Desktop traffic still rules, but mobile + tablet traffic now accounts for around a third of the traffic. 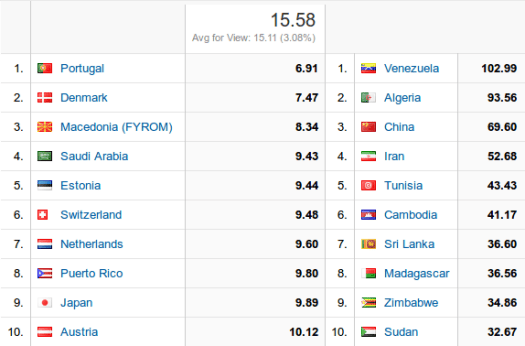 Finally, I went to dig into pagespeed data with pages loading in 15.58 seconds on average. I then filtered the countries with more than 5,000 pageviews, and CNX Software pages and posts loaded fastest in Portugal, Denmark, and Macedonia. However, people in Venezuela need to wait close to 2 minutes for a page to load on average, and in China and Iran around one minute.

Next year looks promising, and I expect to test Gemini Lake mini PC, and maybe some ARM based mini PCs or laptops, but I’ll review less TV boxes as due to some new regulations I can’t easily import them. The regulatory framework is now in place for LPWAN standards, and I should be able to start playing with LoRa and NB-IoT in 2018, using local services, or my own gateway(s). I’ll keep playing with development boards, as I’m expecting interesting Allwinner H6, Realtek RTD129x, Hilsicon, and other platforms in the year ahead, as well as various IoT products.

I’d like to come together with some of the devices and boards reviewed in 2017 (and a Linux tux) to wish you all a prosperous, healthy, and happy new year 2018!

Happy New Year! Thanks for your excellent work.

I like reading your blog, but have to say that in many cases you are not objective. Most of the products you review are junk and garbage, made by the crook Chinese and Taiwanese companies just to get peoples money. 2017 was quite adverse year for me, I have experiences many financial loses due to fake and low quality chips, badly manufactured boards, crooks sellers and companies etc. Many of those crook companies starting from Acer, Nuvoton, Ingenic, Grain Media, HiSilicon … have very bad practices, including requiring people to purchase kits just to get access to GPL licensed sources… Read more »

Thank you for your work. Happy new year!

@Dim Sorry you had troubles this year, and hope 2018 will be better. However, I can’t remember ever reviewing products from Acer, Nuvoton, Ingenic, Grain Media, HiSilicon… although I did review some TV boxes from other companies based on Hisilicon processors. So I guess your complain is about news articles, and I have to say I have no way of knowing about the business practices of a given company, I don’t deal with those, and I only report information I found online. So if I find something that looks interesting, I feature it on CNX, and it’s up to the… Read more »

For me 2017 was a really good year on the personal computing front – we finally saw ARM desktops beyond the entry-level SBC form factor, along with affordable ARM linux notebooks and even ARM supercomputers! Additionally, RISC-V also took off (the WDC announcement) and GPUs made some major strides as well (but that’s beyond CNX’s scope; perhaps something for 2018 ; ) Here’s to hoping 2018 manages the keep this momentum!

Happy New Year and thank you for your News site.

Biggest news I’ve seen in 2017 is release of Gemini Lake processors from Intel.

Happy new year !!!. Thank you for your review many boards

Thank you Jean-Luc for your effort, I think in 2017 we’ve seen a improvement on the information you bring to us, and wish 2018 will be even better.
Happy 2018 to you and all the readers of this blog!

Thank you and Happy New Year’s to the entire CNX community, looking forward to even more ARM-powered successes in 2018.

Happy new year and a big thank you for all of your work during the past year(s)!

Thanks to Jean for everything (especially the give-aways, which are great fun for everyone) and to Karl And Ian for the guest posts.

Here’s wishing everyone a happy, healthy and prosperous 2018!!

Happy new year. Always Thank you for your good news.

You are really great!
Thank you for all of your work, it’s a tremendous contribution to the community!!! ???

I wish for all the community and specially for YOU a HAPPY NEW YEAR ! ???

Your sharing New products from Chinese mfgs,it would be better for you to add facet that buyers beware so that people does not fall into trap from cheap fly by note mfgs.
Also would advise to add specic section that relates to news and brief so that people can do their own research before commuting to buy.
Your information about products are interesting to read and always take news with pinch of salt.
Thank you for your updates.

You have become the source for all small devices. I come here regularly for information and for tips&tricks. A little late, but I also wish you a Happy New Year and more posts in 2018.