NAND flash was invented by Toshiba Memory in the early 80’s before launching commercially in 1987, and the company kept innovating over the years and introduced  BiCS FLASH 3D flash memory in 2018.

However Toshiba Memory is now a separated entity from Toshiba Corp as both separated in April 2017, before the former becoming a fully independent company in June 2018 after it was acquiered by a consortium led by Bain Capital, and including SK Hynix, Apple, Dell Technologies, Seagate Technology and Kingston Technology. 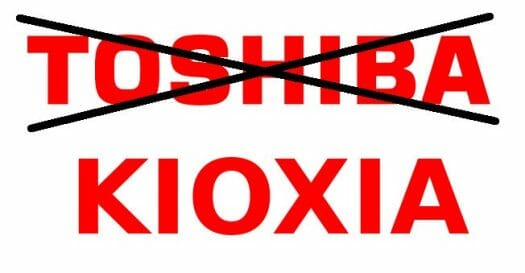 For that reason, EETimes reports Toshiba Memory will soon change name, and from October 1, 2019 will be known as Kioxia. The name combines words from  Japanese and Greek languages with respectively “kioku” translating into  “memory”, and “axia” meaning “value”, which the company says “reflects the value of memory in society driven by increasing amounts of active data through 5G, IoT and cloud computing”.

This does not change anything, except that by the end of the year, we may start to see hardware with Kioxia eMMC flash, Kioxia SSD, and other storage devices like NAND flash, or USB thumbdrives. They still have to come up with a new logo, but they still have a couple of months for this…

They didn’t choose the easiest one to pronounce.

According to them it’s not too bad for English speakers:

The poor Japanese went from toshiba to kiookkusuia(edit: it’s kiokushia) or around about.

What a stupid decision. I already forgot the name after reading the article…

yep, will be reminded as “kiosomething”, “kiofoo”, “kiobar”. Some marketing people have been fired for less damaging decisions.

so poor old OCZ, a previous acquisition, doesn’t even get a mention!