Raspberry Pi is everywhere, and this small size single-board computer has reshaped technology and STEM education. The launch of the recent Raspberry Pi 4 is evident in the success and continuous growth.

The Raspberry Pi 3B+ has seen so much success in several maker’s projects, while not the most powerful SBC in the market, but undoubtedly one of the most popular. I once put together an AI-powered mobile robot using just a Raspberry Pi 3B+, an RPLidar A2, and Raspberry Camera which was way capable of so many things. Another exciting Raspberry Pi end product is the “PoE enabled Raspberry Pi 3B+ based LoRaWAN Gateway” from n-fuse.

The PoE enabled Raspberry Pi 3B+ based LoRaWAN Gateway as called by n-fuse is a LoRaWAN gateway based on the Raspberry Pi 3B+, the LRWCCx-MPCIE Concentrator, and the SBCPoE RPI Hat. It supports both the Europe 868Mhz and America 915Mhz frequency (you have to purchase the exact frequency you want though)

The SBCPoE RPI Hat is a PoE (Power over Ethernet) Hat for the Raspberry Pi 3 that comes with a mini PCIe slot and an optional GNSS module. The LRWCCx-MPCIE Concentrator card is in a mini PCIe form and based on the Semtech SX1301 or the SX1308 chipset and can be used with any embedding platform offering a mini-PCIe slot, USB connectivity and capable of providing sufficient power.

In the case of the Raspberry Pi LoRaWAN Gateway, the LRWCCx-MPCIE concentrator card is using the Semtech SX1308 which has a slightly lower sensitivity than the SX1301. The SBCPoE RPI Hat hosts the concentrator card and provides connectivity to the RPi UART port while also acting as the power supply for the whole system if you decide to go the route of PoE.

Some major features of the device:

Just like the normal standard Raspberry Pi, the device still retains all the features of the Pi like Bluetooth 4.2, WiFi 802.11b/g/n/ac so you can also use the gateway as a potential access point, 4x USB, and others. Aside from powering from the Ethernet port, you can also power it by the micro USB port. 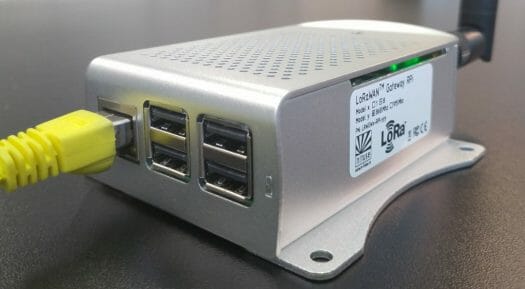 On the software side, a customized Raspbian OS is available for download from n-fuse which helps in putting everything together. The OS already comes with all the required software to acts as a LoRa Gateway as stated in the manual which comprises of packages like the HAL driver, packet forwarder from Semtech, Systemd unit lora_pkt_fwd, and others.

The device comes with an attached LM75B temperature sensor, which is connected to the I2C bus of the Raspberry Pi, and could be helpful for heat management.

The product is available for purchase for 178.50 € for both 915Mhz and 868Mhz which doesn’t include VAT and delivery. Although an antenna is shown with the device, it doesn’t seem to be part of the 178.50 € deal, since a 3 dBi antenna is shown as a possible accessory for the product and it cost around 4.5 €

I consider myself informed, but nowhere do you mention what the blazes ‘LoRaWAN’ means.

LoRaWAN is one of the most popular low power WAN (wide area network) standards for the IoT:
https://www.cnx-software.com/2015/09/21/comparison-table-of-low-power-wan-standards-for-industrial-applications/

It’s owned by a company called Semtech, and this type of protocol has long range several kilometers from the router/gateway, low power consumption (10-year on a coin-cell battery), and low bitrate (a few kbps). Those are used for meters, asset tracking, cattle tracking, and so on.

And LoRa is the physical layer or the wireless modulation scheme that LoRaWAN is built on. As Jean said, it’s really low-power, a single sensor node could possibly run on a coin-cell battery for up to 10 years.

Many people are backing that the future of IoT lies in the cloud infrastructure, well I think it might lie in the connectivity itself, and I believe LoRaWAN holds the future in IoT connectivity. As compared to similar technology like sigfox, LoRaWAN is somehow opened in nature which is something that helps drive it forward.

I still don’t understand why the concentrators for Lora gateways are so expensive. Is it that the Semtech chip is so expensive? Is this how they fund the whole thing instead of charging a monthly/yearly fee per device like Sigfox?

LoRa is a physical radio technology owned by Semtech which makes them the sole possession of the RF modulation specifics. They license this to hardware manufacturers. For the gateways, they license per device if you want to get the fined tunned timestamp (this help in location estimation of your LoRa sensor nodes). Semtech created an I.P. and embed it into a reference design that is licensed to manufacturers, and this is one of the main reason you don’t tend to see GPS chips on LoRa devices. Also, to join the LoRa Alliance, you will have to pay between $3000 to… Read more »

Is it just one more device in the LoRaWAN gateway class of devices? SO PoE hat is only meant to power it from a PoE switch? PCIe – how can I use it, I mean my question is, is it designed with some specific application in mind? or its just generic with many add-ons, we may not use those?