2019 is the year of (silly) cooling fans for SBCs and smartphones! After ICE Tower cooling fan for Raspberry Pi 4, and ROG AeroActive Cooler II for ASUS’ latest gaming smartphone, you’ll be pleased to know you can now add a USB powered cooling fan to most smartphones to keep up working optimally in all conditions. You can get this beauty for just $14.99 shipped on Banggood. 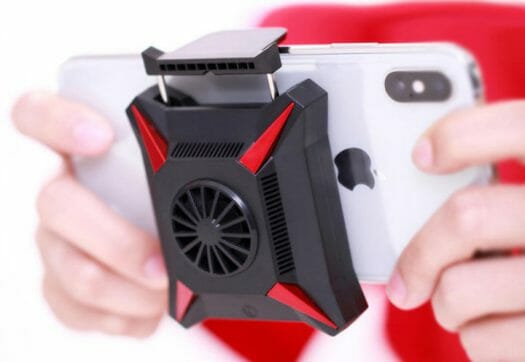 The cooling fan just clips to your smartphone and is compatible with mobile phones with a 62 to 85mm width since it’s adjustable. It’s made of ABS plastic and measures 80 x 68 x 49 mm.

The mobile phone cooler ships with a USB cable to power it. This will quickly deplete your battery though, so they recommend using a power bank instead.

Most people will find a smartphone fan to be a ridiculous idea, but a few years ago, I had a phone that would overheat lowering the performance, and as a consequence, frame rate during gaming. This led me to lose to opponents more often than not, and caused me severe mental distress. I’m sure you know how it feels… 🙂

So I had to find a solution. So I did, and rested my phone on an ice pack to cool the phone when the game was loading, enabling me to restore my winning habits and sanity! Anyway, I’m telling this little story to say a few years back I may have bought such a fan. But right now, my Xiaomi Mi A2 keeps cool enough without a noisy external fan, even while playing games…

Just one final note to add Aliexpress has even more options with pricing starting as low as $2.50 for different designs.

Well this could also be very useful when you use your phone as a car GPS for a long time under the sun, as it overheats and you can’t see shit on the screen when it sets itself in overheat mode

Overheating just to display a GPS map definitely means there’s something wrong with the phone or the GPS application (or both). It’s not as if it required lots of computation to display a few changes every second. And in the worst case you can turn on the car’s ventilation behind it 🙂

It’s probably more related to the hot temperature in the car itself in this case.

the sun and a dark phone skin/case is the cause for me. my phone gets warm just being left on dashboard for a few minutes, unused.
for long drive, but i usually just put a white paper shade on the phone.

I remember the first time I saw a fan on a CPU, it was a Pentium 60 around 1994. I laughed “pwah a fan on a CPU now, whatever”. And now it became the norm to the point that some devices are purposely marketted as “fanless”. Who dares bet smartphones will never embed a small noisy fan to help better dissipate all the battery’s energy into the surrounding air ?