Xebec has developed a two-screen addon for laptops ranging from 10″ to 20″ effectively expanding any laptop into a triple monitor laptop. The idea of extending a laptop screen is not new. Mobile Pixels had developed an attachable extension screen called the DUO and we reported on it in a previous article.

Xebec is a Sailing Ship

A Xebec is a small three sail ship, with square sails, a very apropos term for this system of three small square screens.

Go Anywhere With Triple the Screens

The aim is to be able to attach the screens on-the-go and have them work as well as a full monitor. Xebec’s two-screen extension attaches to the back of any monitor screen. The pair of displays slide left and right so their screens are completely viewable.

The System Is Lightweight

The unit weighs 1.9 lbs (860 grams) total, with a universal attachment that mounts on the back of any laptop. There is also a kickstand included with the unit. That is for any laptop that might tip from the weight of the screens.

The screens must have power and display access for each screen. That means there need to be two HDMI ports and two USB ports, for the micro USB connectors. The alternative, if the laptop lacks the necessary ports, is to use one screen at a time.

[Correction: What the user needs is two video out ports, but that can come in many different formats other than HDMI: Thunderbolt, USB-C, VGA, and DisplayPort to name a few. When paired with an inexpensive HDMI adapter both of Xebec’s screens can be used at the same time]

Nothing To Do But Setup On The Go

There is no extra software needed, or any other equipment necessary to set up the system on a laptop. The Xebec is two 10.1″  1080p screens on slides, that come with two Micro USB cables, two HDMI cables, and a kickstand.

The system is lightweight,  1″ thick, and rugged design for function, stability, and durability. The entire system folds up for easy storage and carrying.  The company is targeting many of the now mobile workers in many industries, even developers.

The timeline is October 2019 for a crowdfunding campaign on Kickstarter, the production of the units to begin in December of 2019 and shipping and fulfillment in March 2020. 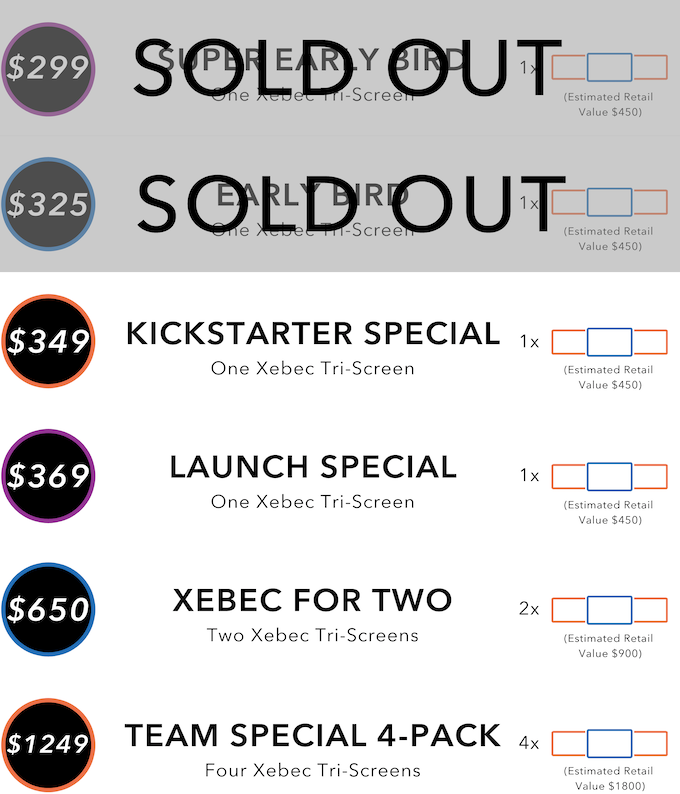 For more information and some opinion on the system from other sources, there is the Kickstarter page and the Liliputing article.

What size laptop is this attached to? I know it can attached to a 10-20″ but I’m trying to figure out the scale of the screens next to my laptop.

It’s a 15″ MacBook Pro. You can tell from the speaker panels on either side of the keyboard.