Using a laptop shell with a smartphone is not a new concept, but products like Motorola Lapdock were eventually phased out. But some people think there’s a market here, that Lapdock may just have been ahead of it time, and with smartphone faster than ever, it now makes more sense to use them as laptop too. That’s probably why the Superbook, allowing you to connect your smartphone to a larger screen and keyboard via a USB OTG cable, has just launched on Kickstarter. 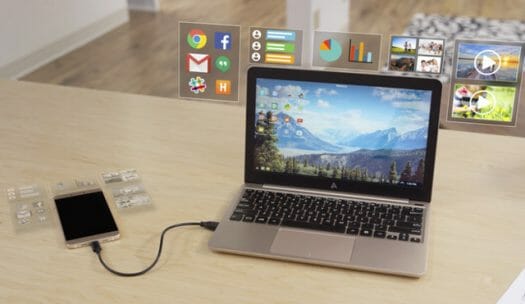 Superbook also charges your smartphone. You’ll need a phone with Android 5.0 or greater, a dual core processor, at least 1.5GB RAM, a type-C or micro B connector, and 25MB free storage (100MB recommended). Why does it have minimum requirements? Because you’ll need to install Andromium OS app which provides a desktop-like interface to Android when connected to Superbook.

If you are an Android app developer, Andromium will also release an SDK to optimize your app for the platform.

The project has already raised closed to $300,000 after about half-day since the launch. You can pledge $99 to get the Superbook with a custom USB OTG cable, and a charging adapter. Shipping is not included though, and add $20 to the US, $40 to the rest of the world. Delivery is scheduled for February 2017.

There’s an Intel sales rep running in little circles with hands flailing about in the air as he screams his guts out yelling “THE END IS NIGH!”…

It sounds interesting, but this bit on the Google Play page for Andromium’s app page is worrisome

“Andromium OS is currently in LIMITED TIME free public beta”. Hate to sound cheap, but closed wall things tend to die and this may or may not be something that lasts. If you buy something that needs an app and they croak when Android moves beyond Marshmallow or Nugat, or whatever (Z?) you have a nice doorstop.

@jim stephens
I wonder if it could also work without the app.

The comments section seems to answer that question:

JJ @Creator. So if you are using DisplayLink technology (chipsets?) this device should be compatible with any device that already has DisplayLink drivers? I’m assuming the Andromium app is essentially providing a desktop UI but is not required for the Superbook to work as essentially the Superbook is a DisplayLink adaptor, external keyboard, mouse and trackpad built into a single device/shell?

I’d rather just buy a chromebook for a little more money.

Does it work __only__ with “Andromium OS”? That’s the main concern.

It is a portable Laptop but is there a need?

Connect a keyboard to your tablet, cast your phone to a TV, connect a Android TV box with mouse and keyboard to a TV.

Which leaves it as a Laptop again and Tablets have been eating that market for years, so not sure, I will roll the dice and pick niche market .

I know the are rasing funding on. Kickstarter but so have retro Spectrums.

@davidlt
I think “OS” is a misnomer here, and I understand it’s just an app to be installed on top of Android 5.0+, so it should work on any phones. It also looks like the app may not be needed, and you can just run Android, and maybe some other OS? as long as DisplayPort is supported. They have not been 100% clear on that.

Just another crap project to get money and make stupid things.

So is just a displaylink dock, but build as a laptop

It should work with linux?
http://www.displaylink.com/downloads/ubuntu

Wonder if my Displaylink Asus monitor would work visa OTG, and how to power it.

Have you seen any solutions to say running an external USB powered hard drive, which is USB, OTG capable, but the host can’t run it?

@Jim st
A powered USB hub from what I understand.

@Carlos
The “DisplayLink USB Graphics Software for Ubuntu” is a ZIP file with an executable, so maybe x86 only, and not working on ARM?

Wonder if my Displaylink Asus monitor would work visa OTG, and how to power it.

Have you seen any solutions to say running an external USB powered hard drive, which is USB, OTG capable, but the host can’t run it?

I’ve got some external drives with wifi to connect to phones, and I’ve got some 64 thru 256gb OTG sticks that work fine, but the phone / pad has to run them.

@tarwin
So can one run a hub into a device to a hub? Not sure how hubs work on the back side of an OTG, but you’re right it could work if a hub is legal.

@jim stephens
DisplayLink monitors should be the main hub / power source no? So they are connected the mains, and power any devices connected to them, or did I get that wrong?
I’ve never tried myself. I wrote about it @ http://www.cnx-software.com/2015/08/29/connect-an-android-smartphone-or-tablet-to-a-monitor-usb-keyboard-and-mouse-easily-with-a-displaylink-docking-station/

The hub featured in the article there does support external drives. I’d think your monitor should have similar feature.

The ASUS display I have has software for Macos, Windows, and linux. but this is a different situation when you have a tablet with no direct USB host connections. The USB port on a tablet and phone is usually a device connection, not a host one, and OTG protocol allows it to do host operations on a limited basis The power situation is odd too, if you look at USB power. I’ve only done single device OTG in driver work and as I commented above, I don’t know how the firmware will work if it has to recognize and enumerate… Read more »