If you remember soon after Raspberry Pi 4 launch, there were talks about the SBC overheating under load, and depending on room temperature and workload a heatsink may be needed for the board to perform optimally at all times.

This gave birth to “interesting” solutions such as 52Pi ICE Tower Cooling Fan, an oversized cooling solution for Raspberry Pi 4. It does the job however, and it allows me to overclock Raspberry Pi 4 to 2.0 GHz while keeping the CPU temperature under 55°C in a room at 28°C.

But the latest Raspberry Pi Foundation board is not the only SBC to suffer from overheating, as at least one user noticed the board would just shutdown under load. The solution was to switch from 10W mode to 5W mode, not an ideal solution since it’s also lowering performance. 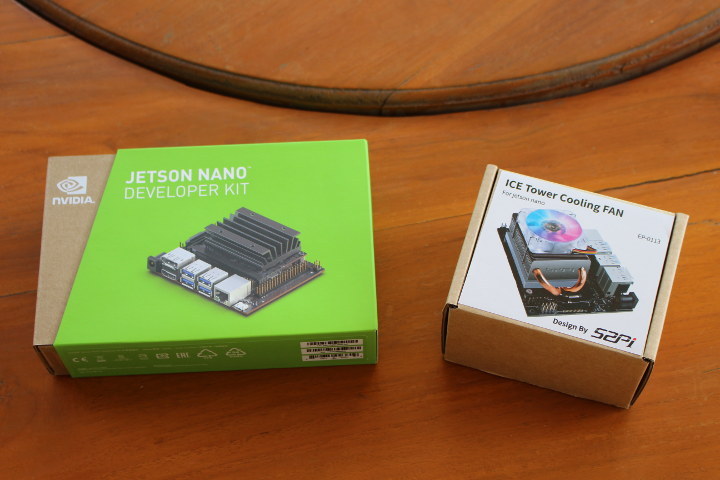 The kit just comes with the board and a quick start guide. 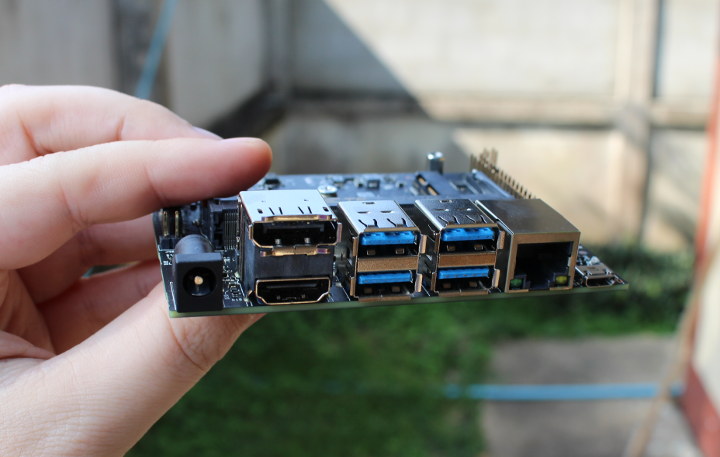 It’s a baseboard + system-on-module below, so future upgrades are possible including with the just-announced Jetson Xavier NX, provided you can manage to procure one once it launched next year.

If we remove the module we can see the microSD card slot and the mechanism to hold the heatsink in place underneath.

That’s important as we’ll see below, this will have to be removed.

Beside the fansink itself, we have thermal pads, and two screwdrivers.

Underneath we have the four mounting screws compatible with the default Jetson Nano heatsink and two copper pipes for cooling the chips.

The user manual explains how to install the cooling fan, and indeed that involves removing the existing heatsink. It’s a shame because that heatsink already has mounting holes for an external fan. So I asked Seeed Studio why not mount a PWM fan like the one provided by Waveshare for $3, and I was told the 52Pi solution can reduce the temperature to around 30 degrees.

I had plans to install the cooling fan in this part of the review,  but since I’d need to remove the stock heatsink, I’ll test it stock first before removing it.  The photo just shows what it should look like once it’s installed with the cooling solution on top of the module, and the 4-pin cable connected to the PWM header on the board.

I’d like to thank Seeed Studio for sending Jetson Nano developer kit and 52Pi ICE Tower cooling fan which you could buy respectively for $99.00 and $24.90 plus shipping on their store.

From personal experience, unless you’re doing heavy GPU lifting work, the stock without even a fan is going to work out nicely.

If it works, it’s good. Yet comparing it to raspberry pi which is without any stock heatsink (unless u count heat spreader on processor) jetson nano is supposed to run with a heat sink and that too a massive one all the time. I assume how efficient will it prove. I say 60~67 under load.