Even though lots of the code was shared, the company found out that maintaining both projects separately negatively affected the development efficiency and quality of the software since they had to maintain two build processes, two QA processes, and two sets of documentation. 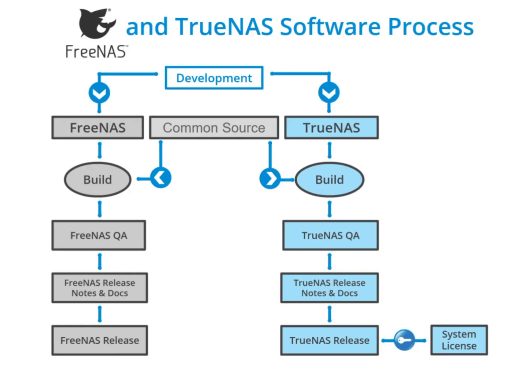 The situation is illustrated in the diagram above, but the company has decided to work on improving the development process, and FreeNAS and TrueNAS will share the same build, QA processor, documentation and even release starting with TrueNAS 12. That means there will be a single binary with two versions:

TrueNAS CORE (Community-supported, Open-source, Rapid development, Early available) is just the same as FreeNAS with only the name changing. The key functionalities, update process, etc.. remain the same, but development should now be faster, and releases may happen more often (6 months vs 9/12 months previously).

Nightly images for TrueNAS 12 will become available on March 11th, so you can test it out before the official release. When that will be, I’m not sure, but you can follow the progress in the forums. Besides the FreeNAS & TrueNAS merge, TrueNAS 12 will also bring improved support for AMD EPYC / Ryzen platforms, enhanced NUMA support for more efficient CPU core handling, and Open ZFS 2.0 support with dataset encryption, performance improvements, and compatibility with Linux ZFS pools.

It would be nice to have a features matrix between TrueNAS CORE and Enterprise, and somebody asked in the announcement, but sadly there’s no such document just yet.

Via Liliputing and Hacker News

I don’t know why anyone would want to use this. My experience with their “community support” was horrific. I was given step-by-step instructions that destroyed my server, then I was mocked and ridiculed for following the instructions I was given.

> for following the instructions I was given.

by random forum user or their staff?

Its not just the community support, even the professional, paid for support is terrible. We bought a FreeNAS Mini device to start our evaluation (file store and iSCSI storage repo for small local branch offices), explained our use case, data volumes, throughput, IOPS, client numbers, etc and asked them to recommend suitable hardware. They were quick to respond and we went and bought 16 x their recommendation for each of the branch offices. After 2 days of struggling with performance we went back for help and we were pretty much laughed at and told that the hardware we had purchased… Read more »