Linutop is a French company offering software and hardware solutions for digital signage and secure web kiosks, and this morning we received an email about Linutop OS now working on Raspberry Pi 4 board.

Linutop OS is a Xubuntu (x86) or Raspbian (Arm) based OS using XFCE desktop environment, and shipping with the company’s Linutop Kiosk program used to setup a web kiosk or a digital signage player controlled via Linutop TV Digital Signage CMS (Cloud or self-hosted). The kiosk/DS software and the content management system (CMS) are not open-source, but there are free demo versions. If you want to install the full version it will cost you 79 Euros, and a self-hosted license for the CMS goes for 196 Euros.

The company also offers Arm and x86 digital signage players based on Raspberry Pi or UP Board SBCs. 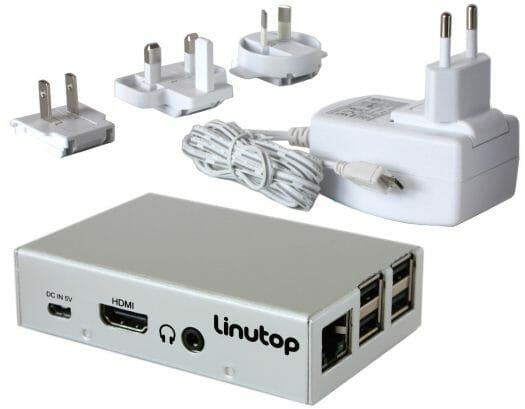 The XS model sells for 189 Euros, while the XS3 version goes for 209 Euros. The power supply and VESA mounting kit are optional accessories… 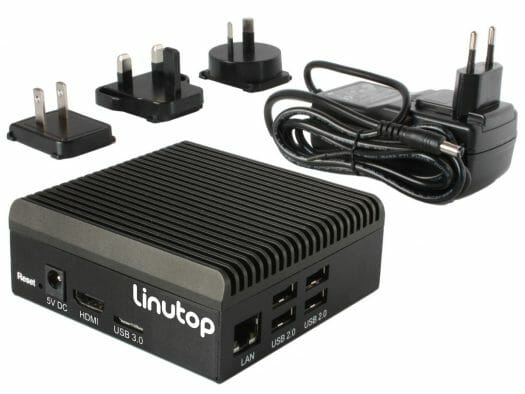 If you’d like something a bit more powerful, Linutop 6 is powered by an Intel Atom x5-Z8350 processor coupled with 16 GB Flash, 2 GB RAM, and an HDMI output capable of 4K resolution. This kind of reminded me of UP board, but at first I thought it was another solution because the original version of the board did not have a USB 3.0 OTG port. It turns out AAEON changed the design since the launch, and hardware-wise Linutop 6 is an off-the-shelf solution, namely AAEON UP-GWS01 based on the latest version of UP Board. The main differences are the logo and the pre-loaded operating system.

The device sells for 289 Euros. Pricing of software and hardware is quite steep, so it may pay off to consider alternative solutions such as Xibo open-source digital signage.  Both Xibo client and server programs are free in Windows and Linux, while Android and WebOS clients are paid versions, but the free options will only properly work on x86 hardware. It’s possible to cross-compile Xibo for Arm, but hardware acceleration is now supported at this stage.

You can find more details on the official website, as well as the documentation website for the OS, DS/Kiosk client, and digital signage CMS.

We are running it since about five years in a mixed environment (mini-pc and raspberry players). It has a good price/performance ratio VS other much expensive solutions.