The Embedded Linux Conference and OpenIoT Summit 2018 have just started, and the Linux Foundation has already uploaded a few keynote videos to YouTube, including the one by Yunsup Lee, Co-Founder and CTO, SiFive, entitled “Designing the Next Billion Chips: How RISC-V is Revolutionizing Hardware”.

Yunsup explains the current problem with chip development, and go through the open source RISC-V solutions offered by Sifive. 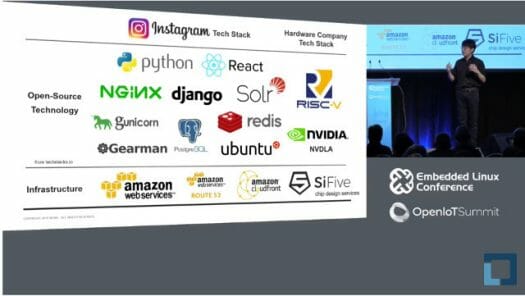 Currently design a chip has a high upfront (NRE = non-recurring engineering) costs, is time-consuming (1.5 to 2 years at least) and silicon vendors normally target high volume production, but now many applications like IoT or machine learning require custom chips that may not be (yet) manufactured in such high volume.

The solution is to adapt some idea from open source software to open source hardware in order to lower the costs, enable fast prototyping, and involve the community of designers and software developers. He took Instagram as an example, as it sold for $1 billion dollars with just 13 engineers thanks to leveraging open source technology and Amazon infrastructure. No hardware company can generate that amount of value with so few engineers the current business model, and to achieve cheaper hardware chip open source hardware technology is needed. So far, there are mainly two such OSH technologies that applies to chip design: NVIDIA NVDLA deep learning accelerator, and RISC-V instruction set architecture, and SiFive would fill the equivalent of infrastructure for software.

As a side note, I’ve been reading and writing about RISC-V for a little while, but it’s the first time I actually hear somebody talk about it… and I’ve just discovered V stands for the roman number, not the letter V pronounced “Vee”, so it’s pronounced RISC-5…

Back to the presentation… SiFive aims to simplify and quicken chip design via their open source Freedom RISC-V cores, third-party IP from vendors like Rambus or flex logic, open source IP, mixed with the designer’s own custom IP, and trying to make it almost as easy as ordering something online.

He also covered products from the company like Freedom FE310 chip / HiFive1 board, and Freedom U540 SoC / Freedom Unleashed RISC-V Linux development board that demonstrate the company’s product capabilities, and can be used for software development. There’s already a lot of software work that has been done with upstream support for Zephyr, Linux and FreeBSD operating systems, as well as Debian, Fedora, OpenEmbedded, OpenWrt and Gentoo distributions ported to RISC-V architecture, but more needs to be done, as for example some Linux drivers are still missing. The ecosystem has also gained traction as over 100 companies have now joined the RISC-V foundation.

A very interesting read elaborating on the differences between open source software and hardware (covering also RISC-V and even SiFive): https://www.bunniestudios.com/blog/?p=5127

@tkaiser
While I agree with some of points in that blog post, I don’t think the conclusions the author reaches are viable, at least not on a universal scale.

IMO neither ‘closed-source’ nor ‘open-source’ are a guarantee for anything. Either approach has its advantages and disadvantages, and there’s no universally-superior model. That said, I love what SiFive are doing, but for entirely different reasons (well-described in the video above).

@tkaiser
“However, even one of their most ardent open-source advocates pushed back quite hard when I suggested they should share their pre-boot code. ” LOL