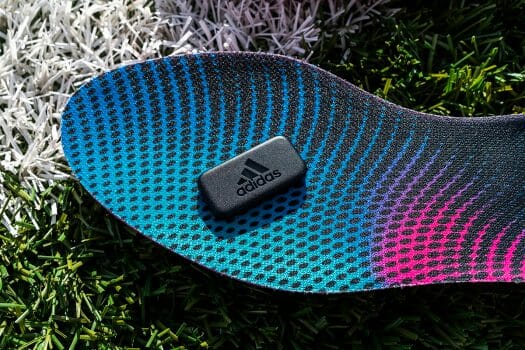 Past Shoes for Movement Tracking

An athletic shoe that tracks steps was reported on in by CNX Software in the past, in the Xiaomi 90 Minutes Ultra Smart Running Shoe article.

A Little About Project Jacquard

Jacquard Technology which had been focused on touch-sensitive clothing is where a small device is woven into the item, like in the Levi Trucker Jacket.  The tag tracks physical attributes and movements.

Jacquard Technology was introduced by Google in 2015 and has been focused on expanding into other areas besides clothing.  The tag is accessed through Bluetooth and can record a variety of motion, impact, and other physical aspects of life. The relay in the tag helps the app record the data and sort it in multiple ways. 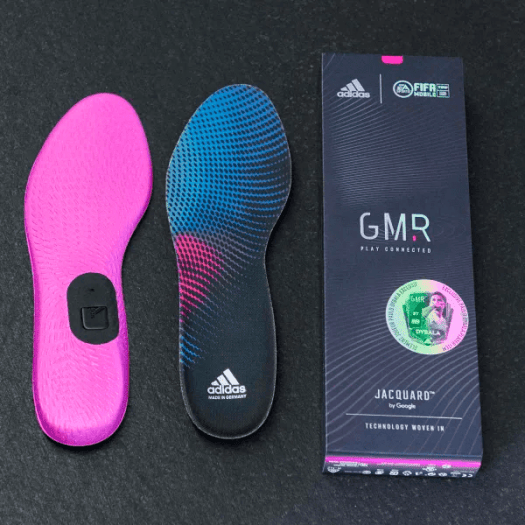 The Adidas GMR tag, once paired with a smartphone, is placed in the insole, then of course into the shoe, where it can record steps, shots, and help increase a user’s OVR (Overall Rating).

The EA Sports FIFA Mobile App can calculate the user’s OVR based on the OVR of 20 teams, and compare that with a baseline result, helping to accurately and realistically calculate an OVR.

Google algorithms leverage the built-in gyroscope and accelerometer to compute metrics. Everything, including OVR, is calculated in the FIFA Mobile Game App, which is proprietary.  EA Sports FIFA Mobile App supports Android and iOS smartphones.

In the USA, pricing is $40.00 USD plus shipping, the insole and tag come together and are included in the total price. The sizes range from 4 – 13.5 and are all open to purchase on the product page at the time of this report. A Liliputing article was one of the sources for this article.