Designed for a digital logic course at the University of Zagreb, the board is open-source hardware with KiCAD hardware design files released on GitHub, and programmable with the Arduino IDE (FPGArduino) and ProjectTrellis open-source toolchain. 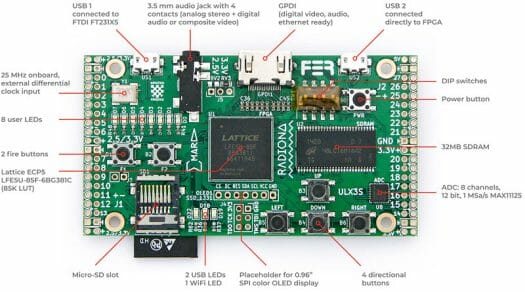 At the time, there was only a version based on Lattice ECP5 85F with 84K LUT, but they’ve now made versions with cheaper variants of ECP5 FPGA and launched the board on Crowd Supply. 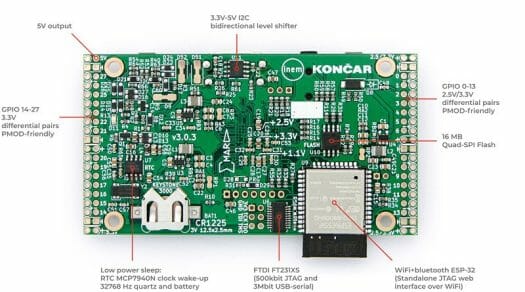 The company has also released the workshop materials on Github with instructions for Linux and Windows. Support is available on Gitter where you can chat with other members of the community.

A comparison table for various Lattice Semi ECP5 development has been published as well. Note that it does not include the tiny, Feather board compliant, OrangeCrab that has just launched for $99 with ECP5 25F FPGA on GroupGets.

Radiona ULX3S is available in three versions with the following pricing:

If you feel up to it, you could also buy the bare board for $10, but you’d need to source and solder the components yourself. The crowdfunding campaign has just launched, and it’s going well so far for over $20,000 raised surpassing the $15,000 funding target. Shipping is free to the US, and $12 to the rest of the world with rewards expected to start shipping on June 16, 2020.

For 130 US$ you can get the Terasic DE10-Nano, which has a not only 110K LUT-Capacity, but also a huge following due to the MISTer fpga retro gamers.

Unfortunately the Cyclone V does not have an open-source toolchain.

The prices are a bit painful. The orangecrab looks cool but for almost $100 … maybe not.
If I need $100 worth of LUTs I need more IO than that.

A pity they have to make these so expensive due to free US shipping, which should have been free EU shipping (where the creators are located). Crowdsupply, alas, was an unnecessarily expensive platform to chose.