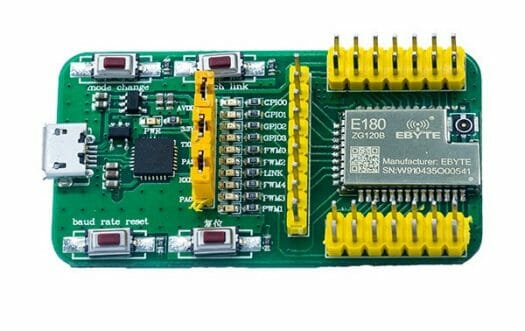 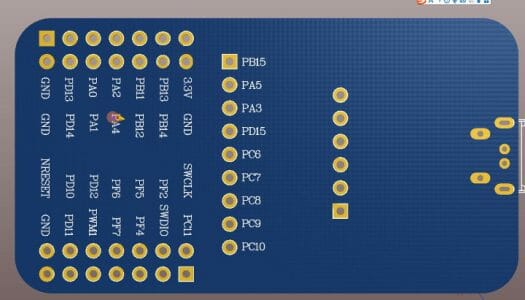 There’s little information about the firmware in the product pages for the module and test kit, although it’s supposed to be compatible with ZHA & ZLL (TouchLink) protocols, but a commenter in Github mentions it’s using a proprietary firmware:

Ebyte E180-ZG120A(B) is a Serial port transparent transmission module, running Ebyte private firmware,not EZSP. (However, it can act as a standard ZigBee3.0 router in the Network)

… the moudule (sic) running a Ebyte offical firmware cant’t act as a standard coordinator like CC2652R, while it can connect your serial device to ZigBee network easily.

EZSP refers to Silicon Labs’ “EmberZNet Serial Protocol“. The comment was made to answer a request to add support for Silicon Labs EFR32MG1 Series 1 Module, including Ebyte module and evaluation kit, to zigbee-herdsman open-source ZigBee gateway solution into order to eventually get support into zigbee2mqtt and/or Home Assistant’s ZHA. But based on comments in this thread, it’s not trivial and unlikely to happen.

If you’d like to give the board a try, Ebyte E180-ZG120B-TB is sold for around $9 on Aliexpress and a bit more on eBay UK. The module itself is sold for $6.88, and there’s also an “RS232 ZigBee3.0 Serial Data Transparent Transceiver” with a case, antenna connector, and serial terminal block sold for $23.24 including shipping.. 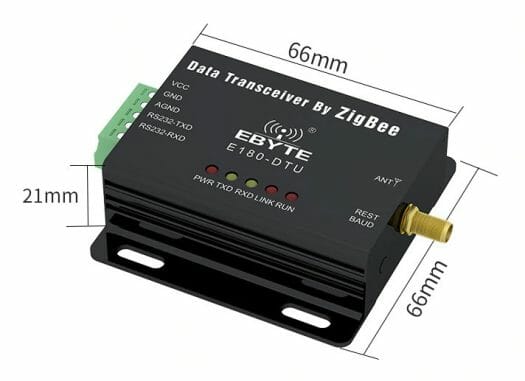 zigbee-herdsman getting support for it would mean it would work in both Zigbee2mqtt and IoBroker.

Home Assistant’s ZHA, however, depends on zigpy so it would have to be added to bellows for zigpy:

PS: Ebyte E180-ZG120B is based on same type of EFR32MG1 SoC used in the new Sonoff ZBBridge

> PS: Ebyte E180-ZG120B is based on same type of EFR32MG1 SoC used in the new Sonoff ZBBridge I think the Sonoff has a EFR32MG1 “Series 2”, which appears to be fairly unrelated (e.g. Cortex M33 vs M4, different availabilities of RAM and FLASH sizes (and different timing on the flash), different SDKs and radio blobs, different peripherals, different pinouts)? I don’t understand why SiLabs would want to muddy the waters so much with their naming system, surely they haven’t run out of letters and numbers to use in the first 8 characters of their product ids that they need… Read more »

I believe all EFR32 series use same the SDK and all Zigbee EFR32 regardless has the same API for integration, newer models might only use a newer version of the APIs so just be that need slight update for new features or functions

I would worry about the closed firmware on these things.. their LoRa DTU firmware wasn’t very good (https://github.com/fifteenhex/ebyterfmodulefuntime/blob/master/crypto.txt)

The E180-ZG120B contain a EFR32MG1 (Series 1) SoC, specifically the IC = EFR32MG1B232F256GM48
To build a firmware with Silabs Simplicity Studio SDK need a license that comes with buying an official devkit:
https://www.silabs.com/products/development-tools/wireless/mesh-networking/mighty-gecko-starter-kit

Someone has now posted a Zigbee coordinator firmware to https://github.com/Koenkk/zigbee-herdsman/issues/168#issuecomment-620476746

I’m a big fan of SiLabs with respect to their cutting-edge stand-alone RF and (especially) Clock Generation products. I’m on the fence with their serial bus bridge products ( mostly 8051-based). But when it comes to tool-chains and licenses for their more complex products like this Zigbee thing – Poof – I’m gone. Way too restrictive and costly.

Itead said that they will be using Silabs Zigbee chips in all thier upcoming Sonoff products because they cost less than the competition, so starting with the new Sonoff Zigbee bridge all Itead Zigbee products from now on will be based on chips from Silicon Labs

Any tips on SWD flashing a standard Silabs bootloader FW on Ebyte E180-ZG120B-TB evaluation board and E180-ZG120B module?

Trying to gather information in that GitHub repository where both a standard Gecko Bootloader firmware and standard EmberZNet NCP application firmware with EZSP serial API is available.

Can this module be used as a zigbee end device, for example to act like a zigbe temperature sensor?