When we covered ESP32 powered TTGO T-Watch-2000 smartwatch this week-end, people noted that with a 350 mAh battery, the watch would last about 3.65 days considering a 4mA drain with the screen always off, WiFI and Bluetooth off, and around 65mA when the screen is on good for about 5 hours of continuous use without Bluetooth nor WiFi.

But it’s possible to make a much more-efficient ESP32-S2 Wifi board, as demonstrated by Olimex with their upcoming ESP32-32-Devkit-LiPo based on ESP32-S2-Saola-1 with circuitry to support LiPo batteries. 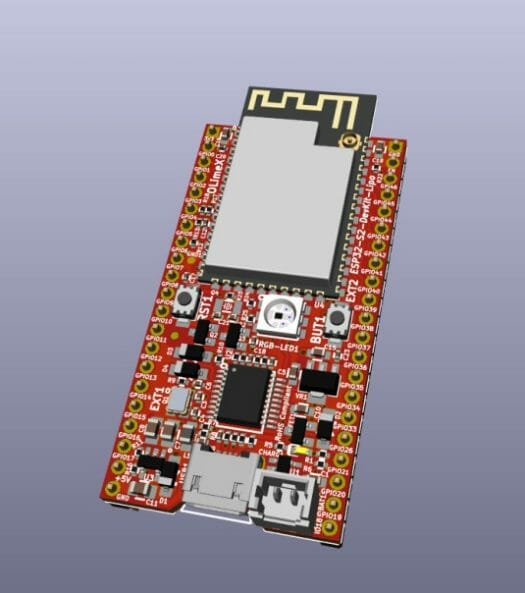 They designed the board with an ultra-low-power power supply circuit which makes current consumption during sleep only 6uA, 4 of which are due to the battery measurement resistor divider, meaning the board should consume only 2uA in sleep mode or about 10 times less than other ESP32 Olimex boards.

When reviewed Qoitech Otii power measurement & DAQ tool, we also noted power consumption could be further reduced by switching to deep sleep mode. I understand that the mode used by Olimex to make the measurement, and cannot be directly compared with the number provided for T-Watch-2000, but in theory, it should be possible to make a watch that only wakes up when the user press a button, and then go back to deep sleep mode. Assuming the board is continuously in deep sleep mode and connected to a 350 mAh battery, it would last around 175,000 hours, or about 20 years ignoring things like battery self-discharge. In practice, you’d also wake the board regularly, so battery life would be much shorter, but still very interesting if your application can stay in deep sleep mode for long periods.

Despite the added battery charger and circuitry, ESP32-32-Devkit-LiPo will have the same size as ESP-32-Saola-1R, and use the same ESP32-S2-WROVER module with 2MB RAM and 4MB Flash.

They are building prototypes now, and I assume one of them was used for current measurements, and mass production is expected to start at the beginning of June.

are they counting PSRAM data retention in this 2uA sleep current ?

If the sleep modes are similar to the ESP32, there is no data retention during deep sleep and hibernation. Only the RTC (and the ULP in deep sleep) are powered.

I would like to know what circuit they use as fully charged LiPo batteries goes beyond 3.6V (maximum rating of ESP32). A low quiescent current low-dropout regulator will typically still have a quiescent current above 20uA.

The board should be open-source hardware, so they’ll release schematics soon.

They are probably not using LiPo batteries. For example this TI design can go 10 years on a 240mhA coin cell with average energy consumption of 2.5µA. It is using BLE.
http://www.ti.com/tool/TIDA-00759
In standby mode this design uses 0.65 µA

BTW, CR2032s are getting better. High quality ones (Panasonic) will last 20 years now before self-discharge. Cheap ones still around 7-10 years. Datasheet says 10 years, but people have tested them out to 20.