We’ve written about Kendryte K210 RISC-V AI processor, and Sipeed M1 module several times including in our getting started for Maixduino and GroveAI HAT boards for low-power AI inference such as object recognition or face detection using Arduino and Micropython programming. 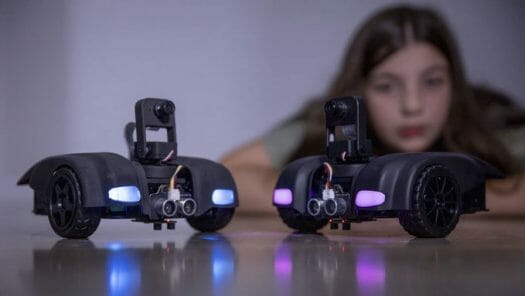 MARK will ship as a kit with the main parts and components including a chassis, a cover, two wheels, stepper motors, a pan-tilt camera with K210 processor, a 2.4″ LCD display, Grove & Arduino compatible MARKduino interface board, some sensors, and six AA batteries.

Tinkergen offers pre-trained model to recognized objects like humans, books, pens, or smartphones, as well as traffic signs, numbers from 1 to 9, as well as domestic and wild animals. As such, the company also provides signs, as well as optional illustrated and numbered cards together with magnets and card stands to facilitate various AI recognition applications.

Students have two ways to learn programming depending on their experience and ability:

Some documentation is on Tinkergen website providing information about assembly, driver installation, and various tutorials to get started.

MARK has recently launched on Kickstarter with an $8,000 funding target that’s easily been surpassed. Rewards start at $119 with the robot kit plus a few sign cards. They have other kits with more accessories including animal and number cards, a Sumo battle map, an autonomous driving map, and a robotics expansion pack adding grabber and slingshot arms/attachments. Shipping adds $14 to Greater China, and up to $46 to the rest of the world. Backers should expect their robot kit to ship sometimes in July 2020 soon after the crowdfunding campaign is over.