Last time, we wrote about myelectronics.nl we covered their Tesla Cybertruck Case for Intel NUCs which housed the mini PC into a mini CyberTruck looking enclosure. The company has now come up with new housing solutions specifically designed for Raspberry Pi 1/2/3/4 Model B/B+ boards.

The 19″ rackmounts support one to twelve Raspberry Pi SBCs and can be used for Raspberry Pi clusters, video walls, and so on.

The 4-board model fitted with four Raspberry Pi 4 boards caught my attention as it also offers an option to bring the HDMI outputs on the same side as USB and Ethernet port like in Argon One case but with more convenient full-sized HDMI ports.

The other Raspberry Pi rackmount model allows you to insert up to 12 Raspberry Pi board in a vertical position with optional HDMI ports as shown above. That’s great for density, but you may have to take care of cooling. They also have another rack option with one Raspberry Pi and two Intel NUCs. 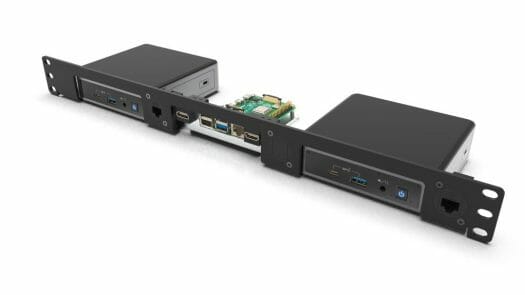 MyElectronics Raspberry Pi rackmounts are sold on their website for 39 to 199 Euros ex VAT and ship the same day.

MyElectronics rackmounts are great for people with more money than time, but for those with more time than money (and a 3D printer), you could also make your own.

The design shown in the video is free to download and modify with both the original OpenSCAD files and ready-to-print STL files available on Thingiverse: 1U Rackmount design, and 2U rackmount design.

Just why? The aforementioned solutions allow for only 4 Pi per Rack unit per side (either using the 1U or the 3U variant) so you end up with just 336 RPi in a full sized rack if you mount these things on both front and back of the rack. That’s an insanely low rack density for an absurd price tag (84 x 49 = 4116 bucks per rack for the mounting solutions if you choose the 1U variant, with 3U it’s even more expensive). And then you would need 336 switch ports and still lack serial console and the ability… Read more »

The world is going crazy. Why would you rack mount a development board and Raspberry PI in particular???
Speaking of which, back to the drawing board for my Odroid HC1 cluster enclosure…

Because some people are running Pi-Holes, Onion Pis, or some other service off the board. They don’t need them sitting around to do so. So putting them in a rack out of the way makes sense.