Mythic Beats is the company offering hosting services for the Raspberry Pi website, and following Eben Upton proposal they decided to host the website on eighteen Raspberry Pi 4 boards, fourteen of which used as LAMP (Linux, Apache, MySQL, PHP) servers, as well as two used as static servers with Apache, and the final two used as memory store using memcache.

Two days before Raspberry Pi 4 8GB RAM launch, they tested the implementation with “normal” traffic (e.g. around one million visitors a day), and the day of the launch, tens of millions visitors came to the website, and it failed, but not because of a failure of the Raspberry Pi cluster, but instead due to a Cloudflare glitch. This is all explained in Raspberry Pi blog.

This is all for internal use, but you could also get your own hosted Raspberry Pi 4 board, as Mythic Beast recently added Raspberry Pi 4 to their hosting service with pricing starting at 7.45 GBP per month (~$9.40 US) with one TB bandwidth and 10 GB (NFS) storage.

The boards run Raspberry Pi OS, and storage is expandable up to 250GB. Billing is also available quarterly or annually, as well as on-demand per second of usage. The company compared their Raspberry Pi 4 hosting service against Amazon Web Services (AWS) a1.large and m6g.medium Arm instances and found the Raspberry Pi 4 to perform considerably better as a fraction of the cost. The test relies on a WordPress installation with the systems rendering 10,000 pages at a concurrency level of 50. The Raspberry Pi was about twice as fast while costing only a fraction. If you are interested you can subscribe to a plan on Mythic Beasts website. Note the service is still considered beta. 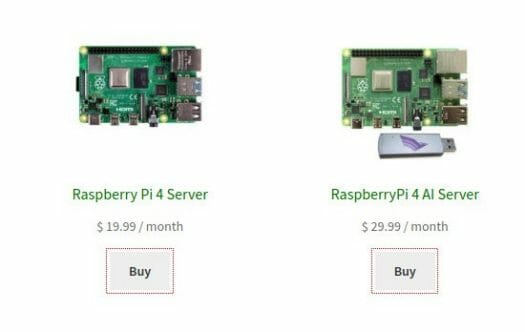 It’s not the first time, I write about hosting services for Arm SBC’s as I covered miniNodes and NanoXion’s NX-BOX offerings several years ago. The latter is gone, but Mininodes also offers Raspberry Pi 4 hosted services with pricing starting at $19.99 per month with a 2GB RAM board fitted with a 32GB MicroSD card. There’s no mention of monthly bandwidth, so maybe there’s no limitation (TBC), and the company also provides an AI plan with RPi 4 coupled with a Gyrfalcon AI accelerator for $29.99 per month. Note the service is also considered beta. Check out Mininodes website for details.

I’ve just been told a company called Data Ideas offers Raspberry Pi 4 hosted in Texas for as little as $5 per month with unmetered bandwidth.

That sounds good, your Mythic Beast link only offers Pi 3 for that price

The faq at rpisevers mentions the following on bandwidth i note

Answer: Please keep your sustained bandwidth to 50Mbps-100Mbps. But you are able to burst.

how do you know it’s a Raspi4? I don’t see that on their pages.

How credible is Data Ideas? Does anybody here use their service?

I got a little confused about that part because they also have:

So it’s also possible to access it via IPv4.

but you won;t be able to provide services over ipv4 and that’s unfortunately still what internet is today

It’s possible that they assign you a temporary IPv4 address when you need to connect using SSH, e.g. by proxying v4 to v6.

It’s a few ports more (email also) than can be proxied: https://www.mythic-beasts.com/support/topics/proxy

SSH over IPv6 is by default accessible on port 22 and the API documentation suggests that when deploying a new RPi you get an assigned non default port at a gateway server that is accessible via IPv4.

> but you won;t be able to provide services over ipv4 With Mythic Beasts’ offer you can host a website accessible via IPv4 and that’s the maximum you want to do with this service anyway. Their RPis boot from network and the rootfs is mounted over NFS. No local storage and most probably no encryption support. The rootfs in such a remotely hosted situation must be considered ‘compromised by design’. You would need full disk encryption with remote unlocking at boot (initramfs + dropbear so you’re able to enter your LUKS passphrase via SSH prior to the rootfs being mounted)… Read more »

These offer rpi hosting too.

I’ve edited your comment to link directly the Raspberry Pi hosting page.
They seem to do differently. They actually buy the Raspberry Pi 4, power supply and other accessories for you, or you can send your own RPi or other SBC. It’s unclear whether the price (116 Euros) is for life hosting, or if there will be a recurring yearly fee (36 Euros).