We’ve previously mentioned PINECIL RISC-V soldering iron during Pine64’s release of PineCube open-source IP camera development kit, and the good news is the soldering iron is now available for $24.99 on Pine64 store together with optional sets of gross or fine soldering tips compatible with the one used with TS100 model

The soldering iron is powered by GigaDevice GD32VF103TB 32-bit RISC-V general-purpose microcontroller and features a small display and two buttons for user interaction, as well as changeable tips. It can be powered by a USB-C power adapter or a 12 to 24V power brick such as the ones you’d found with laptops. 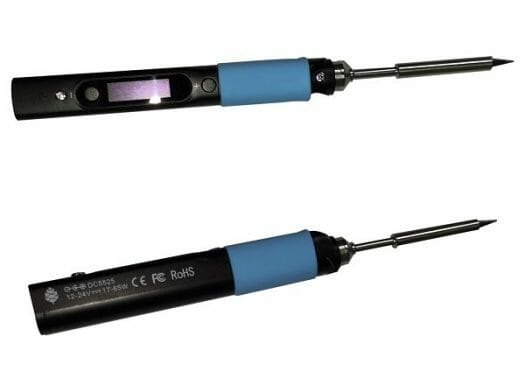 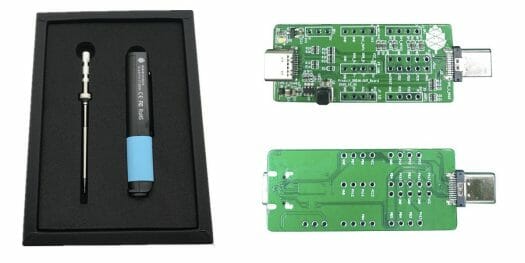 I really like the option to have it powered from either a power brick or a USB-C power adapter, and it provides opportunities for expansion and/or hacking GD32V microcontroller, since the first batch comes with a free GPIO/JTAG breakout board that connected to the USB-C port on top of the soldering iron and soldering tip.

A gyroscope would have been handy for left/right operation, but maybe it’s selectable with the buttons, and if not, the firmware will be open-source and customizable as it is based on Ralim’s RTOS build that also did an open-source firmware for the popular TS100 soldering iron. More technical details including PINECIL schematics and datasheets can be found on the wiki.

Or not. I went to buy it with a set of tips and was told it was “out of stock”. Now it’s back? So I’ve bought it now.
Was it the first batch with the JTAG board that sold out?

Well, I hardly see what benefit it provides over the TS100 (OK maybe USB-C). I mean, it’s not as if we made a good use of 108 MHz in a soldering iron. My TS100 works perfectly fine the way it is, I don’t even know what MCU it uses, and I would find an ATTINY85 perfectly suited to the task.

RISC-V is so hot right now.
Really. It’s an open ISA and it seems to be really taking off. So people want to encourage the manufacturers and get something to hack on.

OK but frankly, make an Arduino Nano compatible board so that everyone can hack on. Focusing on the MCU inside a soldering iron isn’t the best way to advertise it.

As @Ian said RISCV is so hot right now, you don’t even need a heating element 😉

OK at least this is a valid argument.

I also bought one, just a shame of that ugly blue grip, that will get durty really quickly. In my opnion the TS100 is better there as you can easily clean it. On the other hand, maybe this grip will hold me from pushing the buttons while soldering, as i do rather a lot with the TS100. I think my hands or to big…

> maybe this grip will hold me from pushing the buttons while soldering, as i do rather a lot with the TS100

The blue sleeve is silicon based, has good thermal shielding and also better grip. However. may getting dirty easier as you stated.
Regarding CPU, a good PID control implemented may fully utilize RISC-V potential 🙂

Even if they used the best control algorithm, with multiple sensing and heating points, they would not get even closer to the fully computing power of a 108MHz Risc V (even using long doubles). Except with bad programming.

Does it have WiFi?
Not kidding, just asking because they claim RED and FCC certification…

Why does a soldering iron need to have a CPU?

To play Tetris on?
https://github.com/joric/ts100tris

Why should you use a thermostat in 2020, when it can all be done in solid state for a fraction of the cost?

If you don’t trust the SW, add a bimetal cut out switch to avoid burning down your home, if it’s not already limited by the max power of the heating element.