I’m now using a $4 soldering iron which works most of the time for what I’m doing, but sometimes it does not seem to heat quite fast enough which may cause problems. I’m not soldering that often, so I did not think about getting a better one, but I’ve just come across an TS100 digital & programmable soldering iron with a OLED display showing the current temperature, and controlled by an STMicro STM32F103T8U6 micro-controller. 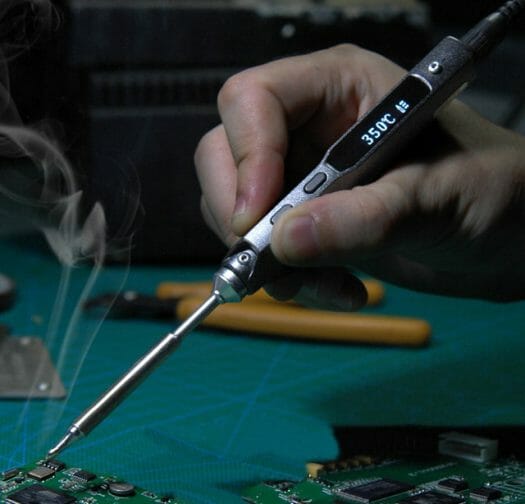 If you connect the TS100 to you computer via its USB port, you’ll be able to change config.txt to adjust default settings like temperature, temperature steps, sleep time, and so on, as well as change the boot logo, and update the firmware.

TS100 is also listed on Tindie where you’ll find a user’s manual, schematics, and source code for your STM32 soldering iron. The manufacturer also has a forum mostly in English, where people exchange ideas, and for example they released a firmware for left handed people.

For each soldering iron, he tested the actual power draw during heating, whether the set temperature (360°C) is the actual temperature, heating speed, heat transfer, and showing special features of each iron. The video is really interesting to watch, but if you don’t have time that’s the summary at the end.

TS100 performed really well for the price, although there’s about a 30 °C delta between the set and real temperature. I really like small form factor, fast heating and automatic power off feature. I’m pretty sure it will solve the issue I had with my $4 iron, so I was convinced an bought TS100 on Banggood for $45.55. I’ll use a laptop power supply to power it up, but if you don’t have a spare one DSY404-19V-2 power supply is recommended, and sells for $22.02 on Banggood.

I have TS100 for few months and really like it. It’s power depends on voltage of the used power supply. With my 19V HP power brick it’s heat up time is quite short.

So 66$ altogether … Wonder if that could be worth the money for my audiophile father.

@agumonkey
If you have an old laptop power supply, don’t really need to purchase a new PSU.

it’s a Weller Magnastat – works on the magnetic strength changing over temperature.

a magmastat would measure the temperature under a volcano?

@Paul M
While a Magmastat would have been really cool, I changed it to Magnastat…

@Karl Johnson
I don’t understand the link to the video. It’s another soldering iron.

Can the temp diff be fixed with calibration?

I find it odd that there seems to be no correlation between the power consumption of the soldering irons and the final temperature achieved. The 907, for instance, has the lowest temperature but consumes the most power, while the MT223 is the hottest but consumes the least power (and even has a shorter heating period!). Why is this?

MT223 has no temperature control (well it has a dial, but it’s not doing anything), and it does not look to be connected to a temperature sensor. That’s why it can reach up to 500 C.
907 has a fixed temperature, but there may be a sensor to limit the temperature.

Other models control the temperature depending on your setting, so power may start pretty high, but the iron will then self-regulate.