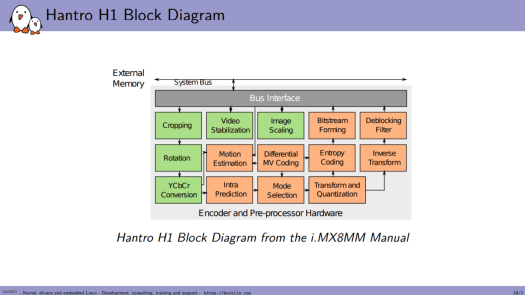 Here we can see different blocks used for encoding. Hantro H1 is a stateless hardware implementation which means it has no microcontroller or firmware running. As can be seen in the diagram, it has a pre-processor that can do things like cropping, rotation, scaling, stabilization, and CSC. It will produce slice NALUs which means no meta-data. There are also some constraints on specific parameters. It only supports I and P slices (no B slices) for embedded encoding. It will take references from P slices that need to be stored in specific reconstruction buffers. Hantro H1 also has internal rate control mechanisms. 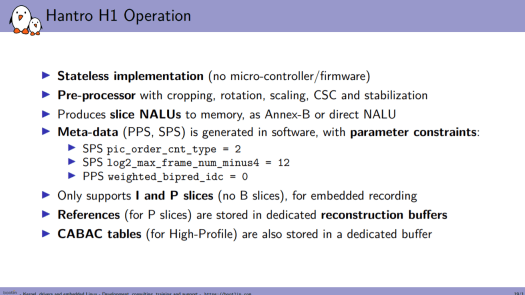 Some of the acronyms above may require some explanations. H.264 has semantics and specific units which are called Network Abstraction Layer Units (NALUs). Each of them has a data header with a specific type that indicates the data inside each unit. For example, there is meta-data in NALUs such as the Sequence Parameter Set (SPS). So, this is meta-data for the whole sequence.

Basically, meta-data is just a series of bits that needs to be understood according to the syntax of H.264. Similarly, there is also a Picture Parameter Set (PPS) for each picture. These are for meta-data, likewise, for coded data, we have coded slice data. There is a specific format called Annex-B which will put the prefix before the beginning of each NALU. This makes it easier to find the start of the next one. 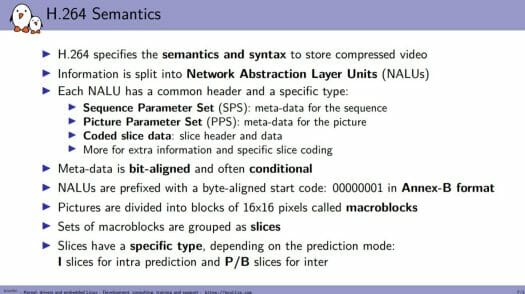 Macroblocks are subdivisions of pictures into blocks of 16×16 pixels. These are grouped as slices. So basically the coded information in the coded slice data in NALU will be composed of data around macroblocks.

For Hantro H1, a lot of parameters can be set which control the encoding. Some of them need to be set to a specific value for the bitstream to be valid. In the stateless case, the state is tracked by V4L2 driver and userspace code. Bootlin is using the media request API just like in stateless decoding to tie the buffers and the parameters. The reconstruction buffers must also be taken care of, as they need to be attached to the input buffers. The current rate control in stateless cases can be implemented by the V4L2 driver and userspace which will read the feedback data itself. 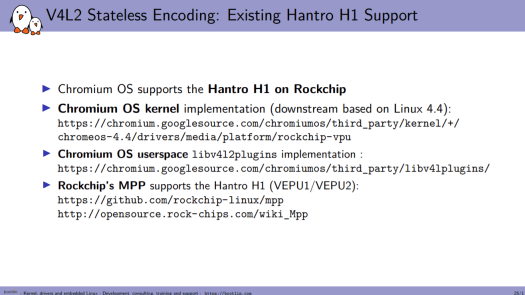 So, the approach that was taken to support this encoder was to use a mainline hantro driver that supports decoding with Hantro G1. Bootlin then added support for H.264 Hantro H1 encoding to the driver. The kernel implementation along with the userspace side is available on GitHub. 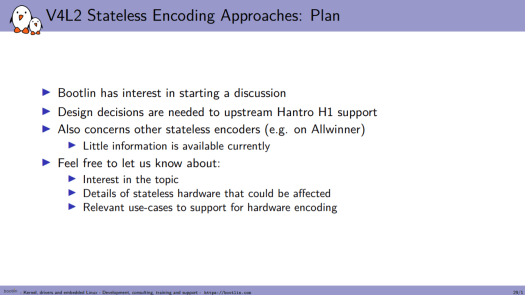 Since the first implementation, there are some issues that cannot be accepted as is, but this gives some ideas to work for a proper interface for status encoders. Future work will also involve a clean up of the Hantro encoding code and bring it upstream with a nice interface that might also affect other hardware like the Allwinner encoder, which is also stateless.

Source: All the images were taken from Bootlin’s Embedded Linux Engineer, Paul Kocialkowski’s presentation slides from the Open Source Summit 2020.

I supported the Allwinner video decode/encode support and I’d do it again in a heartbeat. But this one? No. Rockchip is big enough and NXP certainly is that they can pay for their own development.

As a separate issue, hardware video encode is horrible, just say no. As a means to capture video at a reasonable bit rate, sure, but as a mean of transmission or long term storage? Oh, no, no, no.

And H.264 now? H.265 is being phased out. Why such an old encoder? What specific use do they see this benefiting? The millions of Tinkerboard video streamers?

I think getting the framework in place for these sort of hardware is worth the effort even if H.264 is going out of fashion to help vendors and others mainline similar encoders in the future.

If there isn’t a strong framework in place then you get every vendor implementing basically the same thing in twenty different ways because they don’t want to work on something shared just in case it helps a competitor.

>Is this mostly about implementing the stateless API for encoding, then?

That last few slides seem to suggest that. My impression was that drivers already exist for this thing but they need to get agreement on how it should work to get them into mainline.

H.264 is in the meantime kind of a baseline codec, like many years mjpeg was, some reduced size, not so much efforts CPU whise, with nowadays computing power. Definitely the way to quickly encode an action cam’s stream or as a not so power hungry solution on a drone, a poe powered webcam, a rearview cam, you name it. For sure also for many industrial use cases H.264 is still good enough also nowadays. But if you want to watch 5 simultaneous HDR UHD streams over a single BB link, or even are a streaming operator, then H.264 won’t cut… Read more »

Apologies for being off-topic, but this is one of the few places I have found where the Hantro H1 encoder is (vaguely) discussed. Has any of you used the Hantro H1 for h.264 encoding? I’m working on an IP camera based on the i.MX8MMini and find the quality of encoding made with the H1 poor to say the least. I’ve enabled CABAC + 8×8 transform, the only 2 features documented by NXP which made a modest improvement over the default, but it’s still not amazing. Many artefacts are visible, especially around the text overlays inserted in the video. Testing condition:… Read more »