But here are more options as INUX3D, a design studio and 3D printing facility based in Slovakia, decided to create its own 3D printed modular case system for Raspberry Pi. The TerraPi module enclosure system supports passive and active cooling, up to two 2.5-inch SSD’s or HDD’s, as well as horizontal or vertical mounting, and there’s also a DIN rail option.

Apart from the fanless model targeting uniquely the Raspberry Pi 4 SBC, all TerraPi enclosures also work with Raspberry Pi 3 B/B+ models and are especially suited for people wanting to use the board as a NAS Server, surveillance station, or even a web server. The company highlights Open Media Vault (OMV) open-source project that can make good use of one or two drives. 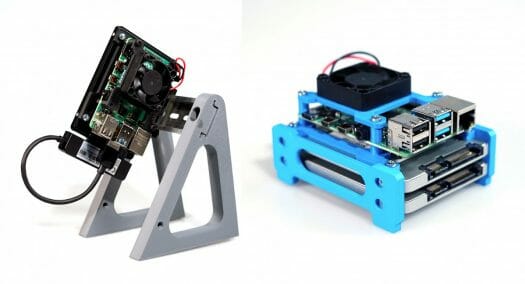 The TerraPi D model shown on the right is made for DIN rail attachment, and the TerraPi Alpha enclosure (left) is for horizontal mounting for one or two SSD’s. If your goal is to protect the board from dust, the TerraPi enclosure will not do anything for you though. Those are more interesting as mounting options.

Note that most of the kits do NOT come with a USB to SATA adapter, and those need to be purchased separately. They can easily be found on Amazon or Aliexpress. INUX3D currently offers eight different TerraPi enclosures in its store with pricing ranging from 4.99 Euros for a vertical mount case without SSD support, and up to 24.99 Euros for a vertical mount, fanless kit that supports two SSDs.

Nice stuff. I went to the shop, and for each item it’s unclear to me what you get: a lot of pictures and text, but not of what you do get.

AS I understand you’d get the 3D printed parts plus screws for Raspberry Pi and SSD’s more most kits. Some kits have a heatsink or a fan, and others also add the USB 3.0 to SATA adapter.

Apologies if it is not clear. You get what you see in the pictures, namely the 3D printed parts and assembly materials (screws etc). The SSD Adapter, fan and other 3rd party components are extra and are sold as seperate products.
We will try to make the descriptions more specific. Thanks for the good words and tip!

For example “TERRAPI D – DIN RAIL TERRAPI MODULAR SYSTEM FOR RASPBERRY PI” … I cannot *see* what I get; a separate picture of those parts would have been nice.

It’s written in the text: The Product consists of…
So the active cooled ones is the 3D printed stuff with screw but not the fan. With the passive cooled one the cooler is included, but this one is only for RPI4.

What is the shipping time to the USA? Also, a price list would be nice.