KKSB is a Swedish company designing and manufacturing metallic products for various open-hardware products such as single board computers including Raspberry Pi, Arduino, ODROID, Orange Pi and others, as well as mobile phone and tablet stands, and they also have a mini-ITX case planned for March.

The company approached CNX Software to review their latest Raspberry Pi 4 case, and I was interested to find out how it would handle cooling.

So I recently received the enclosure in a mostly white package. 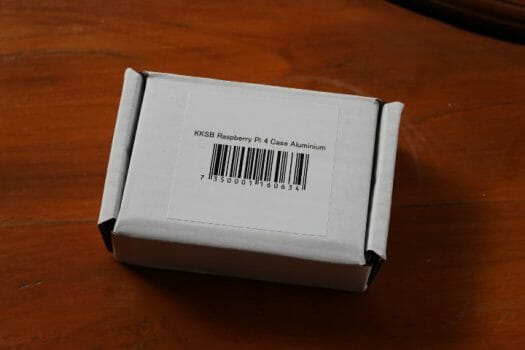 The case comes in two parts as well as a thermal pad for the processor, mounting screws, rubber pads, and two plastic bits for the LED.

First, peel over the plastic film on one side of the thermal pad, and place it on the extrusion for the processor on the top part of the enclosure. 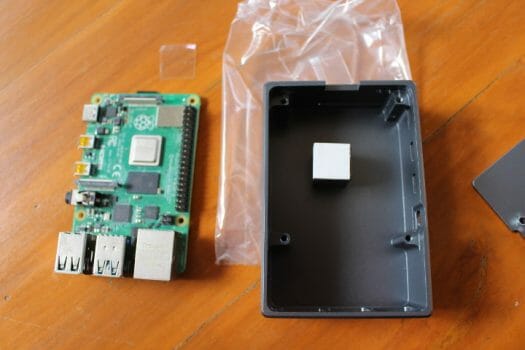 Remove the second plastic film from the thermal pad, and place the Raspberry Pi 4 on top so that the processor comes in contact with the thermal pad. Place the bottom part on top, and tighten it with the four screws. 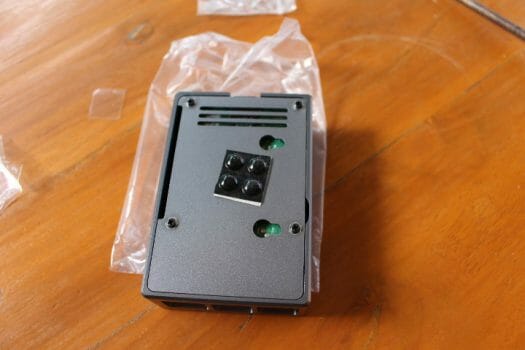 You’ll notice a small opening on the side for a ribbon cable for people wanting to make use of the GPIOs. There are also two holes for wall-mounting and three more cutout lines that must be to let the WiFi signals go through (I can confirm WiFi is still working).

We just need to stick the four rubber pads on the bottom of the case, and glue the plastic bits for the LED to complete assembly.

There’s another opening on top of the MicroSD card and LEDs that should be for the MIPI CSI camera and/or the MIPI DSI display. 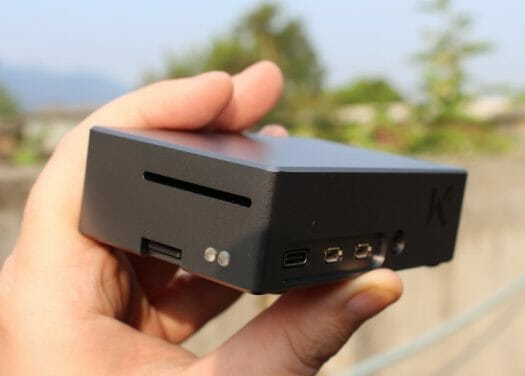 Before testing, I updated Raspbian and firmware to the latest version with apt:

Note that I had to make some changes first due to issues with rpi-monitor hosting server.

Let’s access RPI-Monitor in our web browser and wait until the CPU temperature stabilizes. Note the room temperature is around 28°C.

The left of the chart is idle temperature after several hours after the update, and once we reboot and the new firmware takes effect we can see the temperature drop.

One thing I forgot was that one of the last tests I did with Raspberry Pi 4 was to overclock it to 2.0 GHz, so it was still in this state when I first tested it. No problem, let’s try one of the worst cases first (now it even support overclocking up to 2.1 GHz).

I then installed & started to run the latest version of sbc-bench script:

But stopped waiting a bit longer for the temperature to stabilize at around 57°C. Let’s start the benchmark again:

If we look at the log we can see the 7-zip multi-threaded test crashed once due to running out of memory on my 1GB RAM RPi 4. The throttling bit is set but it must have been a very short time since it does not show in the frequencies displayed in the log:

The chart also shows the temperature peaked at around 80°C.

Let’s disable overclocking reboot, and wait for CPU temperature to stabilize (around 51C this time), before restarting sbc-bench.sh:

Not throttling detected at all this time, and the temperature chart looks good with the CPU temperature never exceeding 66°C.

KKSB Raspberry Pi 4 aluminum case does a good job of cooling the board even when overclocked. WiFi still works, and the case provides openings for GPIO’s and MIPI CSI/DSI modules, as well as mounting holes. The company sells it for 31.92 Euros on their website. If you think that’s a bit too expensive, the KKSB Raspberry Pi 4 case black/silver is also made of metal, sells for only 15.12 Euros but lacks the extrusion for cooling the processor, so you’d have to add your own heatsink and cooling will not be as efficient.

You’ll also find cheap Raspberry Pi 4 aluminum cases on eBay, but note that many of them come with a fan, lack the extrusion for cooling the processor, the openings for GPIO and MIPI cables, and may interfere with WiFi. Just make sure to double-check the features that are important to you.

Again an enclosure that only takes care about the SoC’s heat dissipation while the PMIC area is the other hot spot that benefits from adequate cooling as well. The thermal images here for example https://www.raspberrypi.org/blog/thermal-testing-raspberry-pi-4/ clearly show the problem.

Not blaming Microsoft’s ThreadX here for the overheating 🙂

By simply placing the processor on the bottom of the board, effective cooling could have been provided with just a thermal pad — no extrusion, no heatsink.

Looks like they did a good job with what they were given.

As Friendlyelec was advised to do and started the trend.

I still maintain that you should use active cooling if you’re using it in a desktop or high CPU load situation. I run a inaudible fan case on mine with heatsink on all the hot chips and only rise 25C over ambient when running SBC Bench at default clocks. Idle temps are 6-8C over ambient. I haven’t tried OCing but I suspect it’d be fine and wouldn’t come close to throttling.

Fans are only a solution to saves *space* while trading noise and long-term reliability. When you can achieve a comparable result without a fan it’s always a better solution.

> only rise 25C over ambient when running SBC Bench at default clocks.

So what’s the point having a fan?

Well, as you pointed out, only the main chip is being cooled here. A fan is most likely passing air over the entire board. It was also far cheaper than what was reviewed here.

> only the main chip is being cooled here

Sure, but there exist passive enclosures which cost a fraction of the above solution that take care of that (hint: I linked to such a thing directly above)

Well, it’s your choice, but mine is both fanless and cheaper: https://www.ebay.com/itm/CNC-Aluminum-Alloy-Protective-Case-Kit-Enclosure-Metal-Shell-For-Raspberry-Pi-4/163793095855

Plus 3cm fans become extremely noisy after a few months of work and possibly generate as much heat as they are able to move. As long as it meets your expectations it’s fine though.

If it makes no noise it cant be good kinda logic???

What most of the reviews of Raspberry Pi cases are missing is whether or not the PoE Hat can be used with the case! I now have 2 different aluminum Pi4 cases that do not allow use with the PoE Hat.

Probably because of the board’s design, if the hat goes over the CPU there’s no more room for a heat sink nor for a thermal connection to the outside world. I tend to think that using a very large and very soft silicone thermal pad on the bottom could drain most of the heat from the PCB itself. It would also collect part of the heat generated by the PMIC. I’ve already experimented with sucking heat from the other side on some boards (e.g. NanoPi Fire3), and it doesn’t work that bad. You just need to use a very large… Read more »

So hopefully Pi day Saturday March 14th will bring a Pi4″B” with its processor on the bottom.
A good , cheap passive heat sink should be also in the offing.

Not asking for an M.2 NVME slot even…

The implementation is Hi-Speed only and was never meant to be used by the RPi people according to https://github.com/raspberrypi/documentation/issues/1217#issuecomment-538081361

So no M.2 or mPCIe slot without a newer VideoCore SoC from Broadcom…