When we reported about ESP32-S2-MINI modules last September, we also noted Espressif teased us with ESP32-S3 and ESP32-C3 with close to no details. ESP32-S3 is expected to be a multi-core WiFI & Bluetooth processor with AI instructions/accelerator, but there were no details about ESP32-C3 at all, and we only found out it would be a RISC-V processor several weeks ago.

But Twitter user Johnny Wu posted a screenshot in Chinese and its translation claiming ESP32-C3 was finally released by Espressif Systems. [Update: The datasheet has been released. See comments.] 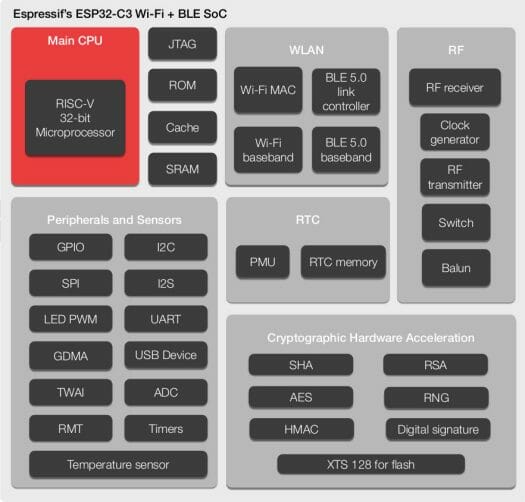 I could not find any information on Espressif Systems yet, nor much on other sources, and the text above appears to come from a post on Xueqiu, and the user also reported Espressif raised funds to develop a WiFi 6 FEM (Front-end module). Nevertheless, the news confirms some of the information available in the source code for esptool, ESP-IDF, and openOCD when looking for “esp32c3” string, some of which is listed in a thread on ESP32.com forums.

If the information is correct that means ESP32-C3 based RISC-V WiFi and Bluetooth modules similar to ESP-01 should soon be available for sale for around $1.

Thanks to Arnaud for the tip.

Shit, this is getting interesting.

Good I didn’t order any ESP32 boards recently, can’t wait to get my hands on a version of this new type!

We see this kind of comment every week or month since 3 years, but it is really going since this time.

Here is the datasheet
https://www.whyengineer.com/t/topic/33

Thanks. The download requires registration, and outside of China the download speed is really slow, so I mirrored it to MEGA.

Here is the English translation:
https://mega.nz/file/4VRGgLzK#YIzeMvj_Z-LayxY8KztL4WiifcmQYcFJTomzFrEr_3c

Be sure to back-off your browser’s scripting BLOAT protection a notch or two if you are trying to download from MEGA, otherwise you will see something like this:

MEGA failed to load because

If the problem persists, please try disabling all third-party browser extensions, update your browser and MEGA browser extension to the latest version. If that does not help, contact support <at> mega.nz

Still no source code for the Wifi stack I presume.

I doubt there would be – FCC would shut any official effort.

You have to admit that being shut out of the USA would be a huge disadvantage for a part.

An idea of the idle power consumption ? And when the wifi is working ?

I could not power consumption numbers other than the 5uA current in deep sleep. There are five modes of operations listed in the datasheet: Active mode Modem-sleep mode: CPU Can run, clock frequency can be configured. Wi-Fi and Bluetooth LE Baseband and radio frequency are turned off, but Wi-Fi or Bluetooth LE can stay connected. (Not sure what that means) Light-sleep mode – CPU Suspend operation. Any wakeup event (MAC, Host, RTC Timer or external interrupt) will wake up the chip. Wi-Fi or Bluetooth LE can stay connected. Deep-sleep mode – CPU and most peripherals will be powered down, only… Read more »

Regarding “wifi can stay connected”, it likely means that all wifi parameters are preserved so that as soon as you turn the radio on, you can communicate with your peers.

Would be nice to see this with the hex-five multizone security stuff.

Actually, ESP32-C3 is so similar to previous RISC-V microcontrollers, that this should take much less time than working on LX-based ESPs

It seems to me Bouffalo is having problems being open enough to gain a foothold in the market with their new RISC-V based WiFi/BLE module. I speculate it might be because of SiFive RISC-V IP restrictions holding them back. If that speculation holds true, it won’t bode well for this new RISC-V based Espressif module. See here for a bit more on this:

It’s likely the wifi and BT that are ‘borrowed’ IP that Bouffalo doesn’t want to document because it would make the origin of it pretty clear. I doubt that it’s the RiscV part that’s causing the problem. As the person who replied to you there pointed out, things like PCI-E and DDR PHY’s are much more likely to be licensed (or borrowed) from someone else and come with redistribution restrictions. This happens all the time with vendors like Allwinner and AmLogic. “Run this magic init blob or you’ll never be able to access DRAM.” If you look at the blob… Read more »

The BL602 development progressing quite well and Bouffalo engineer more listen to open source developer request, you can check out at github: https://github.com/pine64/bl_iot_sdk
You can also participate in PINE64 nutcracker telegram group (by invitation only) on the RE discussion.
You can get a free BL802 evaluate board and here is the PINE64’s BL602 Nutcracker link: https://www.pine64.org/2020/10/28/nutcracker-challenge-blob-free-wifi-ble/

To everyone who followed ESP8266 reverse engineering efforts, this all sounds funny, if not hilarious. For example, there was wiki, now gone, but mirrored at https://github.com/pfalcon/esp8266-re-wiki-mirror , with quite a bunch of info, freely shared, without “by invitation” crap. https://pfalcon.github.io/xtensa-subjects/2.0.0-p20160809/ has 40MB of disassembly listings, callgraphs, etc. That still was not enough to produce open-source WiFi driver. (Though quite interesting and useful results came out of it, e.g. ability to replace lwIP and execute other code using native ESP8266 cooperative RTOS in its MaskROM, without bloat like FreeRTOS). Will it be better this time? New kids on the block can… Read more »

i am tired by all those new china chips: so cheap, yes, but just “alpha” version of hardware, without informations, that will be tested on the skin of early buyers that will became mad to make them works and will be tester-for-free and will send bugreports without to be payed for. Not this time, not me, no more. fu*k them off!

Nope, it’s owned and run by Espressif. Click the About Us or Meet the Team buttons at the bottom of the home page.

OK. I stand corrected. I’m not sure why they did not host the forums on the main Espressif website though.

Sry David if you do not liked the link over TW i did.

So i did this time again with TW like i do usually
and direct to BBS ESP32 in same post.

Espressif posted a few more details about ESP32-C3 in a blog post including variants and upcoming modules: ESP32-C3 provides so much at a cost that is close to that of ESP8266. There is a variant, ESP32-C3F, which comes with integrated flash for simplified designs. We continue providing certified and cost-effective modules for building connected devices easily. The ESP32-C3-MINI-1 module comes with a small form-factor (13×19mm) and support for a maximum operating temperature of 105°C. For ease of migration, we have ensured that the ESP32-C3-WROOM-1 module is pin-to-pin compatible with the ESP-WROOM-02D and ESP-WROOM-02 modules. ESP32-C3-WROOM-1 also supports a maximum temperature… Read more »

Is there also going to be an ESP32-C3 WROVER?

There’s no certification for that listed on expressif
site at this time.

Bill, thanks for the update