We first covered the Dragonbox Pyra in 2014 when it was described as an open-source handheld game console powered by Texas Instruments OMAP5432 SoC, or maybe AllWinner A80, Intel Bay Trail, or Qualcomm Snapdragon processors since the exact specifications were still in the works for the Pandora successor.

Michael Mrozek (EvilDragon) finally decided to keep going with the OMAP5 processor due to the good documentation and software support, and pre-orders started in 2016 with a 330 to 400 Euros downpayment and no clear timeline about shipping.

It eventually took over four more years, but the Dragonbox Pyra is finally getting assembled and shipping to backers has started. 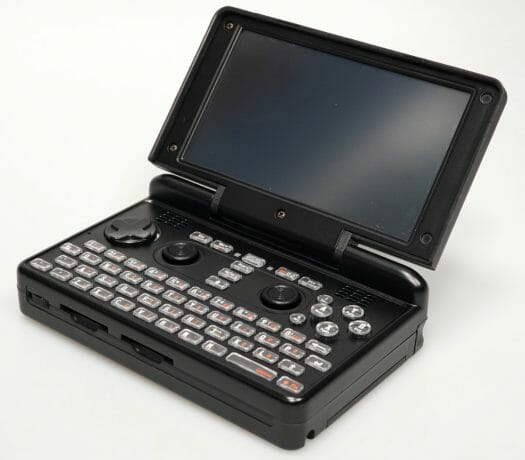 Since so many years have passed, you’d be forgiven  if you completely forgot or did not know at all about the specifications: 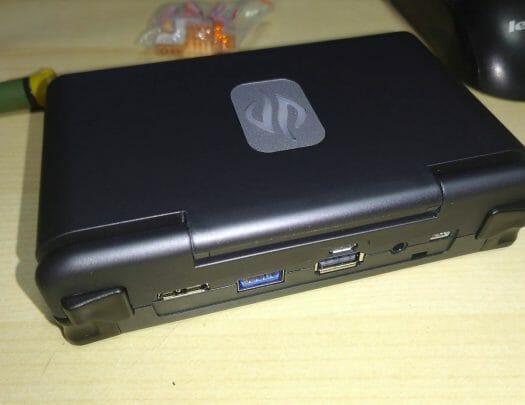 Drasgonbox Pyra handheld Linux PC is quite versatile since it ships with Debian, but it was designed with gaming in mind, and supports games such as Diablo II, Call To Power II, Jedi Knight, or Return to Castle Wolfenstein. Since the device is open-source hardware, you’ll find hardware design files, software, and other resources on the Wiki.

Now that the mini portable PC is out, you may wonder whether you can order it, and indeed you can with pricing starting at 529.41 Euros ex. VAT for the standard version, and up to 626.05 euros ex. VAT for the 4G LTE mobile version. Michael says there’s no clear ETA for new pre-order, and it may take around half a year to buy those from stock. It’s clearly a niche product which explains why the price is quite high, and manufacturing delays are long a well as it is handled by a small team. You can follow the progress of the progress on Twitter and the forums. 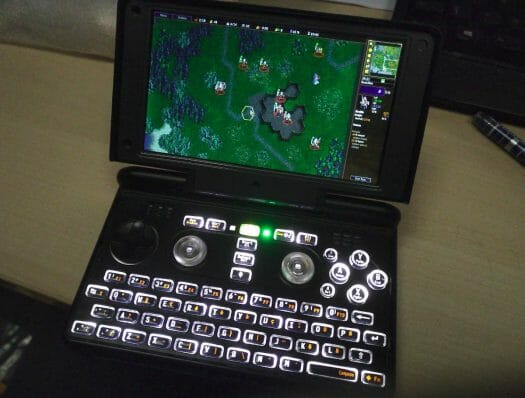 Some of the information is a bit outdated that EvilDragon hasn’t bothered to correct yet:
The 2 GB version is still mentioned in the description but those are no longer offered (and those who chose it, got a free upgrade to 4 GB); there are no analogue wheels available anymore, so it’s a digital one now; he didn’t know there is a difference between SATA and eSATA connectors, it’s actually plain SATA (without power supply); the gas sensor was a more costlier option that they did not choose in the end.
The first units already shipped yesterday btw.

Thanks for the feedback. I’ll update the post accordingly.

Strange, I opted for e-mail notification on comments but didn’t get any.
Thanks for the quick reply! Someone on IRC pointed out that the 2 GB version is still mentioned in the text.

I removed it from the specs. but forgot about it in the text. I still don’t know how to edit it because pricing on the pre-order page is still shown as follows:

Ah now, I can see the price is much cheaper… 330 Euros for standard, and 400 Euros for mobile. Is that correct?

Again something that EvilDragon has not bothered to correct. You can see the available models below the description, only the three 4 GB variants are left (Standard/EUMobile/USMobile). As you wrote correctly at the beginning, the €330/400 is only the downpayment for pre-orders, it’s €630/745 in full.
D’oh! mistyped my e-mail address, that’s why.

eSATA does not include the power supply either.

Sure but eSATA devices come with external power supplies, SATA ones not. So either you need another adaptor from SATA to something your storage device uses or look for a solution to somehow get your SATA device powered.

I’m sorry for Michael, but I don’t see anybody paying over 600€ for something like this with 2014 specs. Get a switch for 1/3 and enjoy games and many other stuff with a little more actual specs.

Well, I don’t really want to give money to nintendo at all as they don’t deserve, I just was pointing to an alternative dor “poorer” pockets 🙂

Over 1000 people with preorders to do it. The switch doesn’t have a modem, nor a keyboard, and is very locked down.

That’s a surprising amount of preorders, I have to admit. But it could easily multiply x10 if the device had a normal price for its specs. I can buy a laptop with a much more powerful cpu and general specs, with keyboard and 4g. And there are some around 10″ size. Sure, you can start saying it does not have this or that, but really, A15 cores are not old, are ancient, and I don’t find fair to charge that amount for a device like that. When I want buy something I have the idea pretty clear, I ask myself… Read more »

You should look into the effects of economy of scale, this is a normal price for its specs when acquiring the components in very small quantities (at least at the time he chose them, can’t change that it’s outdated now). Like the higher price for the mobile version was chosen at zero added profit, €100 is simply what he pays for the Phone-in-One modem (~€70) plus antenna and other needed components for the sensors. Which is crazy high if you consider that you can get a cheap smartphone for the same price and the manufacturer actually makes a profit off… Read more »

Absolutely. It’s an honest price for an honest device.

It costs what it costs because the suppliers charge for their components.

Sure, but does the laptop come with a thumb keyboard, lte modem, joypad, linux is a first class citizen, the cpu can be upgraded, all the specs are open sourced so you can totally hack it … AND … it fits in your pocket? My Android phone is way more powerful than the Pyra but it is unbelievably useless. It has no i/o ports, no keyboard, no joypad, runs android which is garbage, once you get through a bunch of the app store you discover that all the apps are also shareware garbage designed to click jack you for as… Read more »

This is a niche product that surprisingly, it has people wanting. I saw a lot of people wanting due to being open-source in a lot of things and having 4G

Open source should be a right, not a feature. It’s nonsense to charge 3x times the price it would have to have because of that. I love tech and getting stuff for testing and enjoyong, but I don’t care how much I want something if what I want is overpriced, I simply don’t buy it. Maybe because of those people you mention things like these cost what they cost 🙁

The price has nothing to do with the PCB schematics being openly available, some people are just more inclined to choose this because of its openness, despite the price (which is due to the complexity of the device paired with low quantity prices).

The cost is just relative to the volume of parts ordered.

If they can sell 100 000 units per month it would be easy to buy all the parts at dirt cheap prices.

The initial run for the Pyra is 2000 units or so. Just phone up a few manufacturers and see the prices they quote you for each of the parts to see for your self.

I understand most people don’t know how much this stuff costs, just sharing a perspective on why this is the way it is.

What’s the deal of having dedicated 3D GPU and 2D inside the same chip? AFAIK the PowerVR should handle the 2D graphics with ease. Is this because of the industrial roots of that SoC and compatibility requirement with old SW or am I missing smth here?

Android is supposedly still making use of 2D acceleration but PyraOS is not using it (yet).

Saving power when running Xorg without 3D.
Also there are etnaviv drivers for Vivante, so better options in that department.
In similar fashion there are two M4 ARM processors for very low-energy operation.

And no divers on linux for PowerVR, so no 3D acceleration

In the embedded world, 2D GPUs are still a thing since a lot of applications would use only a 2D UI and they are less complex than 3D GPUs.
The OMAP5 probably has both because the 2D GPU should be more efficient so you could save energy there

Almost every modern SoC has a 2D accelerator. Exynos has G2D, Amlogic has GE2D, Rockchip has RGA1/2. The Vivante part is unique in that in addition to blitting, it has full path/stroke support for drawing (OpenVG). The ODROID-GO Advance is a good real world example of the importance of a 2D GPU. It uses the Rockchip RGA2 to scale and rotate the output of emulators in real-time. The significance of this is that it uses a bicubic Hermite filter to achieve “best in class” image display without the limitations of “integer” scaling. While this filter algorithm can also be run… Read more »

I see certain people using this for other than gaming…

It’s great it finally shipped, we just need a Tardis to send it back to 2016!

You can buy a Chromebook, or a entry Laptop for less

$800+ USD for this? I’m surprised people are actually buying the Pyra.

Well, now that the Pyra specs are open sourced, take those design specs and source all the parts for 2000 units.

What do you think they would cost?

Doesn’t change that this very lacking device is $800+ USD.

Fair comment of course. You have lots of choice available to you, you have to make the best dicision for you.

Well, now that the Pyra specs are open sourced, take those design specs and source all the parts for 2000 units.

What do you think they would cost?

I cannot really understand how anyone would want to pay so much for such underpowered Hardware, for that price you can buy a real Laptop and Install a Linux OS on it that actually supports the graphics Hardware.

Fair point. But it is a limited initial run of about 2000. Your laptop is sold in 100 000s of thousands per year. Actually its in the millions per year because your laptop manufacture sells the same laptops in 65 different subconfigurations all targeted to a microniche. Look, there is nothing else on the planet as small as this that has all of these features including a thumb keyboard which is important to my self and a lot of users. On top of that, I am not beholden to Google or a Chinese manufacturer, the cpu is on a daughterboard… Read more »