There are plenty of WiFi modules for the IoT market, but those usually work at 2.4 GHz only. This may be an issue in areas where the 2.4 GHz spectrum is overcrowded. But two years ago, we were pleased to see the Ameba Z2  board offering dual-band (2.4GHz and 5Ghz) WiFi thanks to Realtek RTL8720CM wireless MCU, and last year, we discovered B&T BW16 dual-band IoT module based on RTL8720DN sold for under $4 before shipping.

If you like the cheap price of the module, but do not feel like creating your own baseboard, or soldering wires to the module, you’ll be glad to know Rtlduino RTL8720DN board offers an easy way to evaluate RTL8720DN dual-band WiFi (and Bluetooth LE 5.0) microcontroller as it is fitted with a B&T BW16 module and comes in a form factor similar to NodeMCU ESP8266 board. 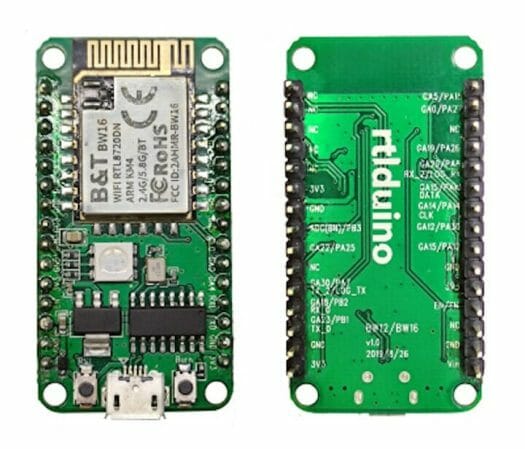 You may wonder why “RTL-00” is shown in the pinout diagram above, and that’s most likely because it’s not the only Rtlduino board around, as we previously wrote about RTLduino RTL8710 board based on RTL-00 WiFi-only module. The new board appears to rely on the same baseboard and is just fitted with a BW16 dual-band WiFi IoT module instead.

As I understand it, RTL8720DN is part of the Realtek Ameba D family, and you’ll find the SDK and a getting started guide explain how to get started (GCC toolchain, build code, flash the binary) in Windows or Linux with the board. One person nicknamed a2302004040 also explains how to use the board with the Arduino IDE in Arduino China forum, but if you prefer English check out ambd_arduino repo on Github. The info on the Arduino forum is however more detailed, and there are code samples for blinking an LED and connect to WiFi.

Rtlduino RTL8720DN board can be purchased on Aliexpress for $6 plus shipping (That’s the fourth choice in the list).

Thanks to Ophir for the tip.

What is the power consumption of this board ?
I’m looking for a wifi board whcih consumes a lot less than esp32/esp8266, does it exist ?

If you can shutdown the M4 core and use the M0 core, you might be able reduce consumption a bit. But Wifi isn’t a particularly power efficent means of RF communication. BT is more in line with what you’re looking for.

The specs look nice, but i have my doubts about the software support, i gave up on the 8710 because the SDK was a real mess, they also promised mbed support but never delivered.

Always wondered why there aren’t more Realtek development boards, since the MCUs are quite cheap and have competitive features.

True that. I know someone who worked for Realtek. Wasn’t a pleasant experience, because he was a software developer and the software had a questionable quality.That explains a lot.

Where is it sold ?

Sorry about that. I’ve added the Aliexpress link at the end of the post.

If someone gets ones of these please let me know if Bluetooth is functioning now on the RTL8720DN.

Yes, it works out of the box with the pre-loaded binary

I should have asked if it works using the SDK you have access to. This is a FreeRTOS system so you have to rebuild everything when adding your own app.

Working in binary is progress. When I first looked at this chip Bluetooth support was missing.

In my opinion the USB port should be connected to the LOG_TX and LOG_RX pins rather than the AT_TX and AT_RX pins. I don’t believe that many people use the AT port. The first thing I did is cut and jumper the board so the USB port was connected to the LOG port so I could do downloads and terminal interaction with the USB using Arduino. Also I replaced the zero ohm resistor in series with the burn switch with 1.5 Kohm to comply with the >1 Kohm of the ‘GPIO Pull Low Restriction’ of the RTL872xD datasheet.

Hi Michael, I’m just trying to upload something to the Rtlduino RTL8720DN board with Arduino ide. It says “all images are sent succesfully”. But nothing works. Not even a simple blink program. All I get on the Serial monitor, is… see picture attached.
Do you have an answer?

hi Olivier, you can refer to this link guidance
https://www.amebaiot.com/cn/amebad-bw16-arduino-getting-started/